There’s a chapter in The Wind in the Willows in which Mole, having abandoned spring cleaning for a riverbank adventure that has taken up the better part of a year, finally stumbles back into his own burrow. It’s winter now, the short days casting familiar trees in long shadows, and he doesn’t recognise the place until he’s practically on top of it.

Want to start a new world? Here are the best seeds for Minecraft.

Poor Moley bursts into tears. How else to express the tangled knot of emotions involved in coming home? He’s filled with remorse for ever having left his snug den; ashamed to bring his cosmopolitan river friend Ratty into a cramped hole that’s dusty, cold and deserted. He’s bursting with pride for the house he’s patiently put together, piece by piece. The feelings bubble to the surface in a great, involuntary sob.

The chapter is named ‘Dulce Domum’, which means ‘Sweet Home’. And that’s exactly what Minecraft is all about.

Well, maybe not all about: in the last half a decade, Minecraft has also become a platform for modding, computing and education. It’s become the focal point of a YouTube culture which has enthralled the youngest gaming generation. And Mojang themselves have become the centre of a new industry, orbited by countless peripheral Minecraft businesses, big and small.

In all of that, it’s easy to forget the kernel of a game that prompted it all. But we ought not to. Minecraft is one of the great survival games – one that managed a sense of serenity and honest toil unmatched by any of the gathering simulators to top Steam’s charts since.

That serenity is defined in opposition to the darkness around it, thanks to a set of mechanics so common now they sound obvious. At the end of each day, a Minecraft survival world turns black and the monsters come out. The only way to prevent them from spawning is to plant torches and lanterns, lighting up the caves and hillsides. Minecraft’s primary thrust, then, is in pushing back that darkness, expanding the frontier and banishing the night.

Almost inevitably, that leads most first-time players to build a glowing homestead out in the wilderness – a yellowy beacon of safety. And then, just as reliably, to get hopelessly lost. 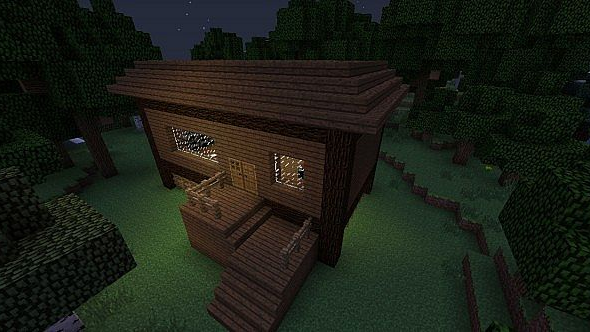 For me, it was digging overenthusiastically down to the sediment where glittering diamond and white-hot lava negated the need to plant torches. Eventually the weight of all that rock above became claustrophobic, and I selected an arbitrary spot in a wall to begin an ascent, digging a rough stairway up through the cubes, until –

A thundering torrent rushed in through the newly opened fissure, turning my tunnel into a waterfall. I let the current carry me down a few levels before hacking upward in another direction – only to come to the same wet conclusion. So I pushed on regardless, swinging my pick blindly as I jumped through a crack in the earth.

The thing about leaps of faith is that you only hear about the success stories. That second stream became an ocean, expanding in all directions. As I slammed the spacebar and willed my avatar upwards to the surface, Minecraft felt like a vast unknown I would never find an anchor in.

Yet, when I burst through the waves, a thin line of land became visible in the distance: the long beach I’d made my home. 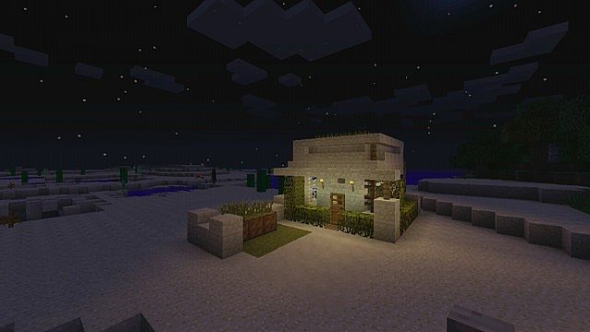 What’s magic about Minecraft is that everybody has their own version of that spine-tingling moment when they stumbled over their own porch; the stories made in its procedural worlds are unique but universal.

In the years since 1.0, the potential backdrops for those stories have expanded immeasurably: strange clay deserts with flat-topped mountains straight out of a John Ford flick; dense jungles of tall redwoods and drooping vines, teeming with animal life. And that fauna has introduced new behavioural possibilities – the ocelots, for instance, can be tamed and used to ward off creepers.

Perhaps you became frustrated by the treacly cadence of updates to Minecraft – I know I did. For a long time, Mojang chose to remain small and tight-knit. But over the years, that team has slowly wrought far-reaching and fundamental change.

Did you know that, if you travel out to the strange, purply towers on the outskirts of The End, you’ll find limpet-like shulkers? Or that their homing missiles induce levitation? And that if you board one of the empty ships docked there, you can pick up a pair of wings that allow you to swoop and glide over the blocky landscapes you once walked? If that sounds like nothing you ever experienced in Minecraft, then it’s time to revisit. 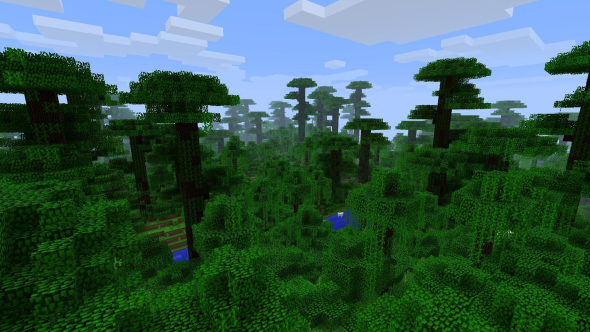 By now, Minecraft homes have taken every possible form: little blocky hovels; elaborate lakehouses on stilts; huge supercomputers made of wood and redstone. But every one of them has been a cosy outpost against the darkness, like The Wind in the Willow’s “little curtained world within walls”.

“I know it’s a— shabby, dingy little place,” sobs Moley to Ratty. “Not like— your cosy quarters— or Toad’s beautiful hall— or Badger’s great house— but it was my own little home— and I was fond of it— and I went away and forgot all about it— and then I smelt it suddenly— on the road.”

Play Minecraft again this Christmas. You might not find a gaggle of field mice on your doorstep waiting to sing you carols. But you’ll find home.