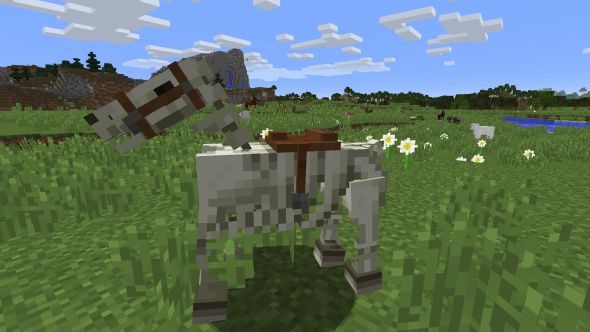 Now under the auspices of the great software haus Microsoft, the Minecraft team have removed some of the mystery around snapshots – the test-stage updates that can reveal the future direction of the game.

The latest batch of patch notes suggests changes to survival mechanics and mob behaviour ahead of bigger features to come at Minecon in September.

Jeb and the gang have tweaked the duration of hunger and saturation effects, which could lead to some nasty surprises when out in the wild. As compensation, however, they’ve increased the effectiveness of moats – rendering some mobs more afraid of the water.

Snowmen are now 10% “less derpy”, and lightning storms will attract fewer skeleton horses. Which is great for fans of sleeping at night. And for the creative mode regulars among you, there are also new spawn eggs for lots of different mobs.

“This time they are working properly,” notes Mojang’s Searge. “So we’ll keep them.”

As ever, anybody can download snapshots if they’re OK with creating a new profile in their launcher and ticking the box for “experimental development”. It’s possible to switch back at any time via the launcher’s dropdown menu. Think you might?

We talked to a different Minecraft team at E3 – Windows 10 advocates and Americans, all of ‘em. They’ll be at Minecon in California’s Anaheim Convention Centeron September 24, I’m sure.