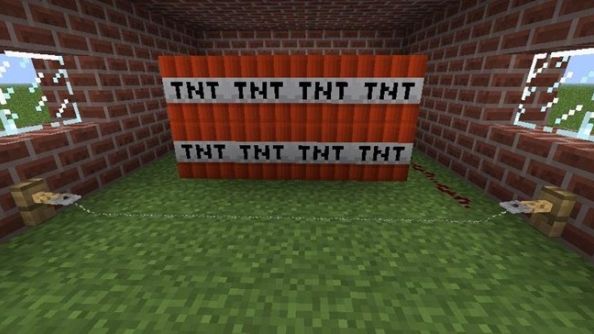 Minecraft, played in its unaltered Survival form, is about the frontier – pushing back the darkness and finding home. But though its inventor is long gone, it’s always betrayed Notch’s love for programming too. Redstone is the magic stuff that’s entangled creepers in Rube Goldberg traps and enabled fully-functioning in-game PCs, and it’s now come to the Windows 10 edition beta.

The .13 update delivered at the weekend introduces redstone blocks, ready to be hacked into dust and then laid as circuitry – or turned into torches, lamps and levers. That means the groundwork’s already there for Windows 10 players to move beyond subsistence with doorbells, automatic lights, mob grinders and rollercoasters.

At the moment beta players only have levers, buttons, pressure plates, tripwire hooks, note blocks, trapped chests, detector rails and TNT to work with. But more advanced tools – most crucially, pistons and repeaters – are planned for future patches. This is only the first of three groups of redstone functionality to be added via updates.

Minecraft: Windows 10 Edition might be Microsoft’s first great idea post-Mojang acquisition. They’ve tied its development to the Pocket Edition, which is now speeding along after years of sluggishness and incremental progress. The plan is for PC and mobile Steves to run around the wild together.

.13 has brought bunnies too. Think you’ll hop into the beta at some point? Regular ol’ Minecraft will of course be supported alongside the flashy new OS version.