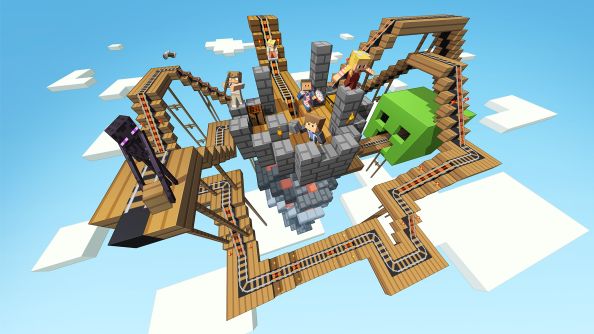 The sale of Minecraft to Microsoft felt impossible, right up until the day it happened. But there was no cataclysmic change apparent afterwards. In fact, all the faces remained the same: it was Mojang’s Searge pushing out patch notes, week in, week out; Mojang’s Owen announcing Minecraft: Windows 10 Edition a year ago; Mojang’s Jeb still wearing the lead designer’s fedora Notch had first passed to him half a decade ago.

Used to making it through the night with your inventory intact? Graduate to zombie games.

At this year’s Xbox E3 conference, it was Mojang’s Lydia, the toothily-smiling face of Minecon, who strolled onstage to the familiar muted piano tones of C418’s soundtrack. Though she spoke like a good corporate citizen about the “power of Xbox Live”, the goofy heart of Minecraft, it seemed, remained in Sweden.

How strange it was, then, to sit down for a private Minecraft presentation a couple of days later and find myself surrounded by Americans. This was, it turned out, the Redmond team behind Minecraft’s beta Windows 10 Edition – an enhanced take on the mobile version that finds Notch’s Java codebase wholly rewritten in C++.

What does a new codebase mean? Apart from anything else, it represents a total reset of Minecraft’s modding capabilities. Windows 10 players are entirely cut off from the game’s long and storied legacy of maps, texture packs and mods that add completely new sets of systems.

That’s not a niche concern either: the team estimate that about half of those playing the Java game on PC customise it in some way. Their intention now is to officially support a controlled level of modding in a way Minecraft hasn’t before – exposing parts of the game to Windows 10 players block by block. As it were.

That support started on June 13 with the 0.15 update, which made character textures accessible in PNG form. They now sit in an images folder waiting to be edited in MS Paint; when I requested developer Jason Major dress the standard creeper in a hot pink jersey, he selected the paint bucket and made it so.

More far-reaching is the planned Autumn add-ons update, which will make behaviour editable in a similar fashion.

Dive into the creeper’s folder and you’ll find its JSON file. Here is where the properties of characters live – their speed and their health, their height and the size of their collision boxes. Open a JSON file in Wordpad and you can play with the values. “The cool thing with add-ons is that we’ve rewritten the game to be more data-driven,” says artist Spencer Kern. “So now when you go in and customise things, you’re not ripping apart the core game and adding the code there. You’re just taking the knobs that we’ve exposed and tweaking the settings.”

In this case, the creeper’s movement speed is turned up to 11. 1.1, strictly speaking, but a fivefold increase nonetheless – creating a terrifying, inescapable version of the iconic farmhouse leveller.

It’s just as feasible to copy and paste the properties of mobs between files, mixing and matching so that zombies scatter like rabbits and pigs explode when ignited – the latter demonstrated by the total devastation of a peaceful valley at the hands of the Redmond team.

It’s a simple toolset right now, but evidently a flexible one. Onstage at the Xbox conference, Mojang hurtled through an emergent in-game narrative about an alien invasion thwarted by G-Men. It transpires that the men in black were behaviourally-modified villagers, and the flying saucers modified ghasts from the Nether.

The Redmond team consider it important that players are not only able to make these changes easily, but in a “very safe, cross-platform and forward-compatible way”.

“So as we release more updates to the game, those things keep working,” explains Kern. “They don’t just break and have to be redone for every update.”

This is, of course, in dramatic contrast to the version-swapping nightmare Java Minecraft has become for anybody interested in sticking to their favourite mods as new updates roll in.

There’s nothing here yet that matches the complexity of what modders have already made possible in the existing game. What the Redmond team can do is make Windows 10 Edition modding the friendlier option.

“One thing we really struggled with on our Java platform is that people get locked to individual versions that their mods are written to,” notes executive producer Jesse Merriam. “Different players are having trouble playing together because they want to combine their mods and that’s problematic.

“It’s important that whatever we create here always works moving forward, and there is a compatibility system that will let it continue to function.”

Since Minecraft’s been rewritten to deliberately expose values to the player, it won’t be a problem when players decide to run different add-on packs alongside each other. JSON files and PNGs can be easily swapped about and shared – like the text and image files they are – and applied as defaults to Realms, the dedicated servers on Mojang’s subscription service.

That’s one area where Minecraft could stand to become a lot friender. Simply playing co-op without forking out for Realms involves setting up your own server, a process that can easily swallow a evening as you navigate router settings. But Merriam says there are no announcements to make on that front – his team are focused on getting cross-play up and running with the consoles next year, as it is now between PC and mobiles.

“Beyond that, we just continue to explore different ways to bring people together and let them explore multiplayer,” he says. Much of Minecraft’s future will be told in Redmond, but the Americans haven’t ousted the Swedes; support for Java Minecraft is ongoing. As for matching the depth of its modding on Windows 10 – that’ll come piece-by-piece, like any ambitious Minecraft project.

“We totally know that people will [want to] go off and build totally new mods and systems on top,” concludes developer Jason Major. “Our ambition is to get there eventually, letting people customise the game essentially in any way they’ve been able to do in the past, [but] now in this official capacity.

“This is where we’re at so far – it’s going to take us a while to get all this functionality enabled. Texture packs were step one, step two is going to be these add-ons, and there’s a whole bunch of future stuff we’re figuring out as we go.”