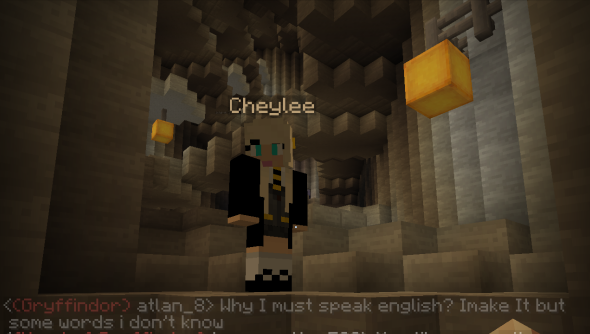 Welcome to my first Minecrafting diary! This will be a chronicle of the many, many adventures that I have in the world of Minecraft. Some week’s I’ll be telling you about what I’m building, whatever project I’ve currently lost myself in, and other weeks I’ll be adventuring, exploring or maybe even getting a little nostalgic about my pixellated pastime.

Before I start, I have a confession: I haven’t done a great deal of building in Minecraft lately, not for a few weeks now. Sure, I’ve tried out mods and texture packs and custom maps, but I haven’t really got myself stuck into anything in a little while and I fear I might’ve lost my edge. How am I going to start a diary of my Minecraft adventures?

All this gets me thinking that I might need to go back to school, so to speak, and then that gets me thinking about a certain Minecraft server I had a quick look at many moons ago: Pottercraft, the Harry Potter server. How’s it doing now, I wonder…

Pottercraft sends me to Hogwarts. It’s a vast, sprawling map of extraordinary scale with several square miles of school space, everything from the dining hall to the dorms. It’s also a roleplaying server, a place to play within the Harry Potter world. Its blocks are fixed, indestructible, and I’m here not to build things, but to build experiences. This means I’ll have to (shudder) socialise.

This is going to be a new experience for me. The roleplaying, I mean, not the socialising. To be honest, I’m throwing myself into this experience with little idea of what to expect. I do, however, have a healthy handful of preconceptions and even before I log in I’m already having second thoughts. This really might be like going back to school, but not as a pupil. I’ve twice worked as a teaching assistant out there in the real world and I’m already wondering how similar Pottercraft is going to be. Am I once again going to find myself marshalling large groups of children, trying to get them to stay in line, to pay attention, to not hurl food at one another? Am I going to need to renew my CRB before I head to Hogwarts?

I keep telling myself that, sure, while I’m probably going to be surrounded mostly by kids here, that’s not really going to be any different, or any worse, than if I was logging into a Battlefield server. I can handle any abuse or any misbehaviour that comes my way and I’m ready for the screenfulls of badly-typed bad language.

Things have changed a little since my last visit, which was really only a cursory wander. This time, I immediately materialise in a room that has questions written upon the wall, and below each is a button. I’m being Sorted, and the answers I give, represented by the buttons I press, will determine whether I end up sharing dorms with Ron Weasley or Draco Malfoy. Each press of a button has me teleported to another room and after three questions it’s confirmed that, as before, I am a Ravenclaw in heart and mind. Then, two quite unexpected things happen.

First, my view becomes nothing more than a mess of gaudy, jagged polygons and it takes me a few moments to realise that I’ve materialised inside somebody’s head. The map has teleported me to the starting point outside the school and I’m currently sharing the same spot with six other people, something that gives me a disturbing interior view of all their custom skins. Then I find that someone has been waiting for me here and they insist on showing me around. My appearance on the server as a new, houseless player had them rushing to the start of the map while I was sorted and they’ve been waiting for me like an excited puppy. Though they must have done this dozens of times before, they absolutely insist on showing me around and carefully explaining to me everything there is to be found.

Now, let me make it quite clear that the Pottercraft map is a big map. It’s huge, sprawling and outside of the school itself, which I never finish exploring, a host of other outlying structures are waiting to be found. I spend about ten or fifteen minutes just with this player as he shows me a library, a dining hall, some dorms, a courtyard and two dozen other rooms I can barely remember and certainly will never find my way to again. This place is a labyrinth, and while Hogwarts looks both elaborate and beautiful from the outside, it’s rather plainer and more uniform inside, something that doesn’t help you navigate.

I have a few questions that I put out to the other players: Can I starve on this map? Do I need to worry about any environmental hazards? What are the rules of conduct? No, no, and be decent to the other players, are the responses I receive, several of them from the admin who goes by the name of harrypotter529. Acting as a sort of benevolent dictator, the worst punishment he promises is a day-long ban for anyone who is disruptive or disrespectful. I’ve no idea how often he has to hand these out, but as I wander through the halls of Hogwarts, greeting other players or losing myself in the tunnels below the school, everyone is so polite and relaxed that I can’t imagine it being very necessary. Now, this is all very nice, but there isn’t really anything to do beyond typing in the name of the odd spell or having the most cursory of chats with whoever I bump into. At least, that’s what I start to think and, just as I’m getting restless, harrypotter529 says that it’s time for An Event. What happens next is, surprisingly, an awful lot more fun than I would ever expect it to be.

Everyone who wants to play is teleported to a closed room where they can leap onto a platform to vote for the sort of Event they want to be involved with. It turns out we can engage in Contests, a Maze or Hide and Seek. You know what? Hide and Seek actually sounds like a lot of fun and I’m a tiny bit delighted when almost everyone else joins me in voting for the same thing. Once again, harrypotter529 teleports us all away and we’re back outside the school. For a second I’m confused about who we’re supposed to find, until our admin makes it clear that all of us are searching the whole school for him.

Cue players heading off in all sorts of directions, banding together or splitting up as they call back and forth to say where they have or haven’t looked. He’s not in the library, he’s not in the staff room, he’s not in the cavern under the school. Suddenly, the call is out. Ten house points to Ravenclaw! One of my peers has found him hidden in an alcove and, aha, there’s a competitive aspect to all this. Then, the whole process starts all over again and a thought suddenly occurs to me: this is quite good fun.

After several sessions in which we’re frantically scurrying high and low, harrypotter529 then decides that we’re going to play in the maze. This enormous construction sits at one end of the map and apparently somewhere within it there’s a single pumpkin just waiting to be found. The maze is incredibly large and so, to guide us, our host keeps throwing down lightning bolts that strike the pumpkin, so we’re chasing the sound of thunder as we run into dead end after dead end, retracing our steps as we dash past each other and try to- “Ten house points for Sytherin!” Comes the call. “SLYTHERWIN!” someone shouts. Damn, these kids have sass.

I’ve got to go. Unlike these children, I can’t sit about playing games all afternoon, but I feel a tiny bit disappointed. I wanted to see what was coming next. Sure, none of this is going to rank amongst the most extraordinary or revolutionary gaming experiences I’ve ever had, but I actually enjoyed myself amongst a perfectly pleasant crowd of people on the internet and I had an important reminder of what Minecraft can really be. It doesn’t just have to be the challenge of survival mode, nor does it have to be a co-operative construction project. It can also be a space in which you play, a space that you get to shape and enjoy in whatever way you want to. Minecraft offers a framework for fun and it’s entirely up to you how you wish to enjoy it.

My playing has also reminded me of something that I seemed to forget when I stopped teaching: children can surprise you, really surprise you with how bright, how kind and how savvy they can be. I’ve played so many shooters with so many kids hurling insults back and forth that I’ve come to roll my eyes at the idea of sharing any online space with them, but that’s only made me leap to conclusions. It turns out there’s plenty of good kids out there and when they get together it doesn’t have to turn into another re-enactment of Lord of the Flies.

I don’t have any children, but if I did, I’d be delighted to find they were playing together in this way.