Update 1.7 is being referred to by Mojang as “the update that changed the world”. They’re not bragging – the entire world generation system has been revamped, doubling the number of biomes, adding an “amplified” option for those who like ridiculous terrain, reducing the amount of ocean, and adding stacks of new trees and flowers.

There are new blocks too – two new types of wood, stained glass in both block and pane form, packed ice, red sand, and a type of dirt called podzol. Portals can now be considerably larger too, and fishing has been completely revamped to add the ability to catch both junk and treasure. Top tip: it’s easier to do the latter if you enchant your rod. That wasn’t a euphemism.

People love mapping their world, and Mojang has made it easier to do that by making them take up an entire block side if you put them in an item frame. The achievements and statistics screens have been revamped, as well as the chat system, and commands have been added to spawn mobs and blocks.

Finally, there has been heaps of work on the backend of the game. Resource packs now include the ability to change sounds, servers can recommend resource packs, and you can have more than one pack selected at once. Uppermost packs take priority. The entire multiplayer netcode has been rewritten, and a bunch of graphics options have been added alongside basic support for shaders.

Phew. Want the update? Just boot up Minecraft and play as normal – it should download and install itself before you play. If you run a server, you’ll need to download this file to update it. When you do install it, it’s probably a good idea to generate a new world because the new biome generation code won’t play nice with the old stuff. If you’re playing on a multiplayer server, expect to see the apocalypse arrive before the map gets wiped.

Alternatively, and I love this idea, you can do a “blind jump“. This involves grabbing some supplies, ten obsidian and a flint and steel, going to the nether and travelling as far as you possibly can before building another nether portal. When you pop out into the overworld, you’ll be far enough away from your original spawn that it won’t cause glitches with the map generator as new chunks butt up against old chunks. Plus, you’ll be able to revisit your old home by making the same epic trip back. Top tip – before you leave, write down the coordinates. Just in case. 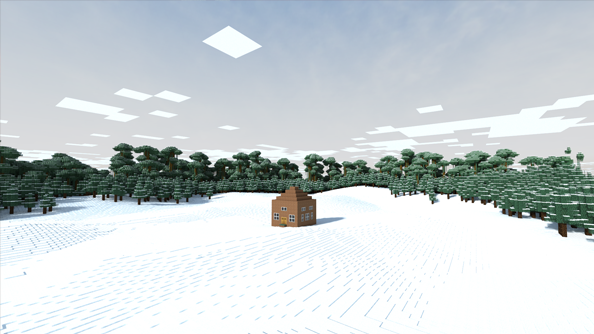 So, what does that leave us? Well, I’ve seen some nice bits and bobs on the community front this week. This graphic is a nice comparison of the different colours of wood you can harvest, but someone’s pointed out that the backs of paintings don’t match any of the colours. That’s clearly because paintings are art. Are games art? Science is yet to find an answer.

This creeper casemod is brilliant. No, double-brilliant — firstly because it looks awesome, and secondly because the father or mother involved their kid help put it together. Making things in real life is almost as fun as making them in Minecraft.

Lastly, this underground mushroom cave is brilliant. We see a lot of surface constructions, but precious little creativity underground. More of that, please.

That’s all for this week. If you’ve seen anything in the Minecraft community that you think I should be highlighting, tell me about it by dropping me an email. I’ll be back with another roundup this time next week.