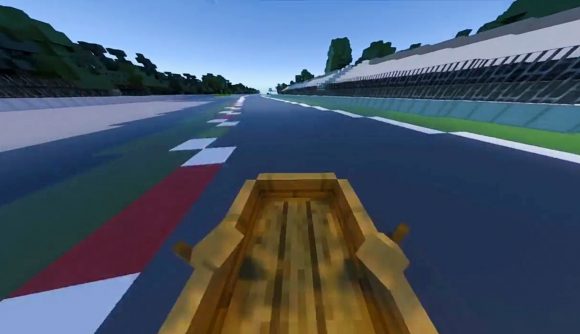 The world may be stuck indoors right now, but has little effect on Minecraft players’ creativity. Over the past year, we’ve seen various projects that fill the void of not being able to go outdoors. One content creator recreated Mount Everest to 1:1 scale, only to climb it in four hours – never-ending stamina and a lack of environmental concerns help, it seems. Now, though, someone has put together a 1:1 replica of the Monza F1 track – also known as Autodromo Nazionale Monza if you’re fancy.

It’s a great build, but my favourite part is the builder’s solution to the lack of cars in the building game. If you’re going to take to this circuit, it’s going to be on a wee boat. The build was shared to Reddit by ScurrMinatorYT, who shows it off with a swift lap while riding his fastest boat. Another commenter crunched the numbers and found the boat to be travelling at an average speed of 126mph – that is a zippy vessel.

ScurrMinatorYT explains that it took him around 50 hours to put the whole thing together and that the straight is about 2,000 blocks long. If you’re wondering how the boat moves so swiftly, it’s thanks to a texture pack that turns ice grey.

Sadly, the map isn’t available to download right now, but ScurrMinatorYT hopes to have it up when their Minecraft Marketplace partnership is granted. For what it’s worth, though, the map is built on Minecraft’s Bedrock edition.

In the meantime, though, you can check it out below:

I made a 1-1 scale replica of the Monza F1 track, You can also ride it on boats! from Minecraft

There are plenty of other nifty projects that are happening right now, too. Europe has been made into a fully playable Minecraft map, and one chap converted Google Earth into Mojang’s old PC game.

If you’re looking for more Minecraft maps, you know where to click.