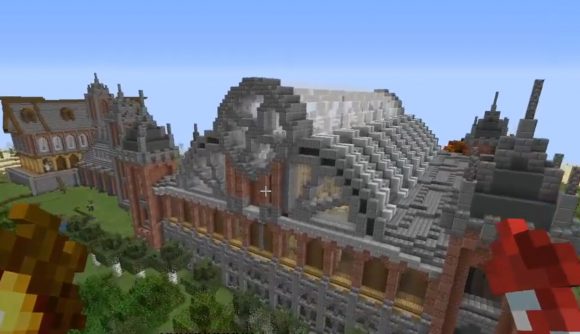 After years worth of updates, there are now a heck of a lot of Minecraft mobs to keep straight, just during normal play. But what if you wanted to collect every single mob in the game, in survival, and catalogue all of them in a museum? That sounds like far too much work, but as ever, hardcore Minecraft players are willing to put in the effort that we mere mortals are not.

Woetson collected nearly every mob in Minecraft, and built an architecturally-impressive museum to house them all, as their Reddit video shows. Each floor hosts a series of glass-encased exhibits, each of which contains a single mob within, from bees to endermen and everything in between.

There is that ‘almost’ word in there – the museum is missing the Ender Dragon, wither, hoglin, piglin, and some variants. It’s also missing aquatic creatures, but Woetson says an aquarium will be an upcoming project. As it stands, Woetson estimates that the build took over 200 hours.

Oh, and yes, you might want to call a massive exhibit of living animals a zoo. But as Woetson says, “If Animal Crossing can call it a museum, then so can I”.

I collected (almost) every single mob in the game, in pure survival, and then stored them in one location; this is the museum that i’ve been working on for the past year! from Minecraft

The holidays seem to have inspired plenty of big Minecraft builds, like when one player built Mt. Everest at 1:1 scale – and then spent four hours scaling it.