Minecraft has had zombie pigmen for ages, but it hasn’t really been clear what form a non-zombified pigman might take. Now, we’re about to have an answer in the form of piglins – a new mob type introduced at today’s Minecon stream. Sadly, it doesn’t seem that these guys are going to be much friendlier than their undead counterparts.

Piglins will populate the Nether as a new hostile mob. They’re gold lovers, and will participate in bartering – a variant of the existing trading system. You can avoid their attention by putting on some golden armour, but Mojang explains that they’re still liable to attack you if you open a treasure chest near them. (Just treat it as a stealth minigame.)

Mojang’s also lifted the veil on some new honey mechanics in the wake of the bee update that everyone’s been buzzing about. You can now get honey blocks, which as you might expect are sticky. That means you can’t run while you’re standing on one, but they can also be used slowly slide down from great distances. These could easily be incorporated creatively into parkour levels, creating one-way sliding poles and other platforms to make the courses more challenging and interesting.

Minecraft’s gameplay team says they did a lot of real-world bee study to try to make the game’s bees as educational and realistic as possible. Bees will collect pollen from flowers, and they’ll drop that on their way back to their hives. That can drop onto crops, allowing for realistic pollination in the game. Once honey is created in beehives, players can place campfires underneath them, and the smoke will calm the bees down to make it possible to gather honeycomb. Otherwise, gathering honey will anger the bees, and they’ll sting – but just like real bees, stinging means bees will lose their stinger and eventually die. 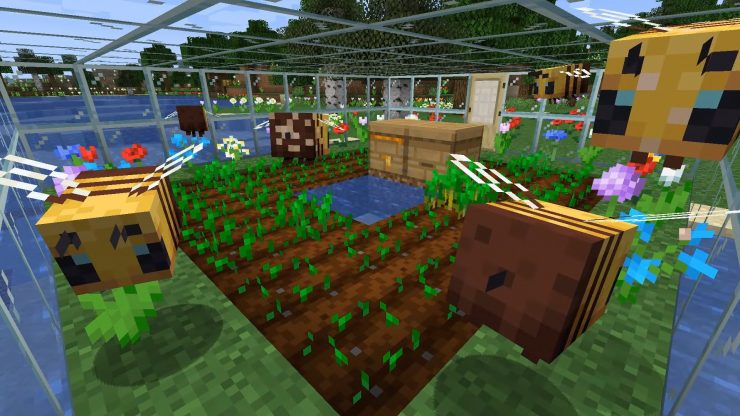 This info is all coming as part of Minecon 2019, and we’re getting new details on Minecraft Earth early access, new realms for the Nether, and a bit of additional detail on Minecraft Dungeons.

We’ll have more on the Minecon announcements as the show rolls on.