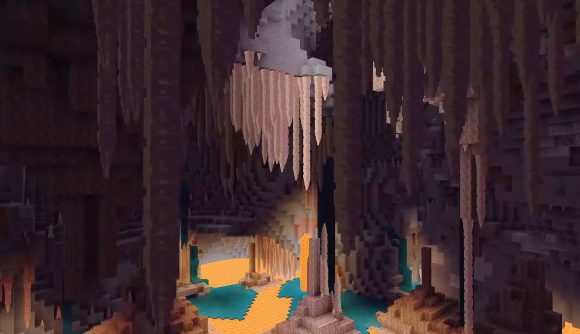 While the Minecraft 1.17 release date has been partially delayed – the big Caves & Cliffs update is now coming in two parts – the snapshots are still regularly coming through. The latest 21w16a snapshot introduces a handful of new features. Including a major addition for Minecraft dripstone, but perhaps the most exciting change is the introduction of big ore veins.

The current ore veins are more properly called ore ‘blobs’, because they’re just small groups of ore blocks bundled together. The new ore veins are “large, rare, snake-like underground ore formations” that will generate in addition to existing ore blobs, so you’ll occasionally find much larger deposits of certain ores that you can follow deep into the earth.

The other big new feature here is dripstone growth, which just feels disgusting to type out like that. Basically, it lets stalactites and stalagmites grow somewhat realistically with the new dripstone blocks, but you can get full details on how that growth works in the patch notes on the official site.

This update also makes some small changes to the textures for the new raw ores. Today, Bedrock also got a major new beta update that brings it in line with many of the recent Java snapshots.

The Caves & Cliffs update may be releasing in two parts, but that doesn’t mean we can’t give you a preview of both!

Today’s Bedrock beta lets you explore much fancier caves, as well as introducing the spyglass, crystals, tinted glass, and more:

For more building games, you can follow that link.