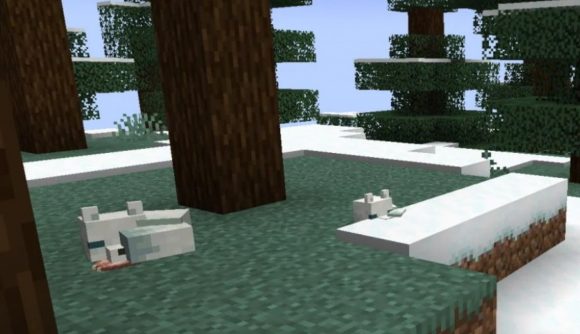 The Minecraft devs are prepping the way for the 1.18.2 patch, which will feature a round of bug fixes before Mojang moves on to finalising the Wild update. For now, that means we’re getting a smaller series of (semi-)weekly beta snapshots, and snapshot 22w05a brings us what the devs call a “small squishing (that’s a word, right?) of bugs”.

A visual glitch with water blocks has been in the game since at least 2012, when it was noted on the Minecraft bug tracker. Placing water diagonally from another water block would result in a graphical issue. It’s a purely cosmetic problem, which is likely why it’s lingered so long, but hey – it’s finally fixed now.

This sort of thing isn’t all that uncommon – in the snapshot cycle leading up to 1.17, we got multiple fixes for ancient bugs. But this is pretty much the most interesting thing in the patch notes for today’s snapshot. There’s a reversion to a previous badlands change to “avoid causing generation changes and chunk borders. This change will be re-introduced later.”

Once these snapshot changes are implemented for patch 1.18.2, the devs will start building toward the Minecraft 1.19 release date, which means we’ll start seeing beta versions of The Wild update previewing all its new features.