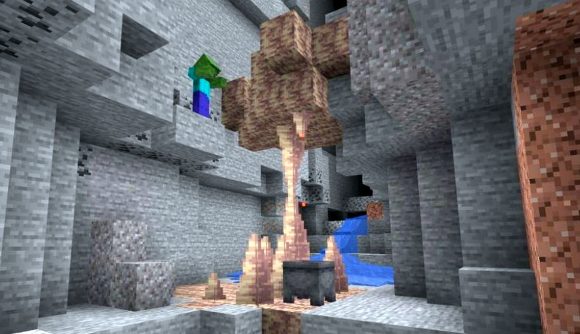 The Minecraft 1.17 Caves and Cliffs release date might not be due until summer 2021, but that doesn’t mean you won’t get to try some of the update’s incoming features before then. Mojang has released a brand-new Java snapshot “full of tasty Caves and Cliffs features” – and the stars of the show are stalactites and stalagmites, so you’ll soon be absolutely, positively clear on which is which.

“This particular snapshot adds blocks for dripstone – stalagmites and stalactites. Or is it stalactites and stalagmites? Anyway, you can’t find them in the world just yet… but try out the functionality of the new blocks!”, Mojang posts on the building game’s subreddit. Snapshot 20w48a adds Dripstone blocks and Pointed blocks to test out, with the Pointed variant “form[ing] a stalactite if placed on the ceiling or a stalagmite if placed on the floor”. Sweet.

Combining these lets you build your stalactites down and down – or your stalagmites up and up – into longer creations, and as the block type’s name implies, they’re sharp – so jumping onto the latter will hurt. That also goes for being hit by a falling stalactite. Yikes.

Other features include stalactites dripping water if there’s a water source above (or lava, if you’ve decided to place some molten magma above the ceiling), which can fill up cauldrons over time. Plus, it’s worth noting lobbing a trident at Pointed Dripstone will break it. That’s probably a no-brainer, but good to note. 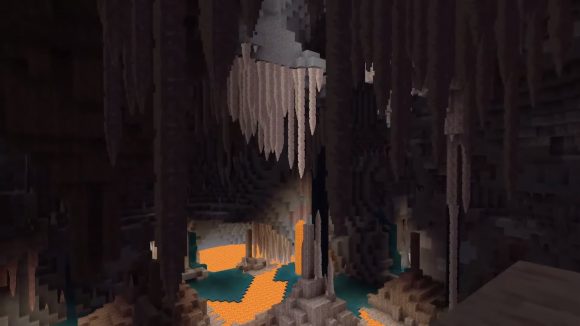 Alongside the Caves and Cliffs goodies, there are various other neat features in the latest snapshot – such as being able to throw an entire bundle’s worth of stuff out into the world by using one, and fend off freezing from that recent powder snow addition entirely by donning just one item of leather armour. Cosy.

You can check out the full rundown of the snapshot right here, as well as gather some tips on the best Minecraft mods, Minecraft seeds, and Minecraft maps at those links.