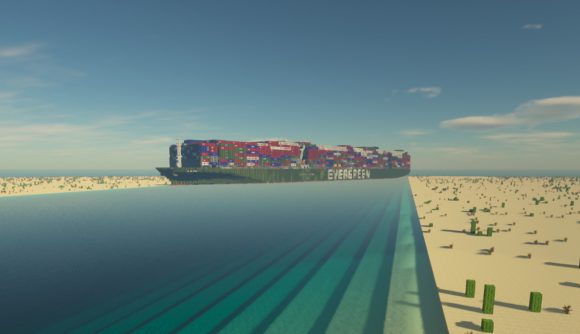 The Ever Given sailed into the Suez Canal and our hearts on March 23, and spent a long time stuck in both. While the shop was extricated from the canal after six days of blocking one of the biggest shipping lanes in the world, it hasn’t left the world’s imagination. Now, of course, the time has come for it to be rebuilt in Minecraft.

This build comes courtesy of Admiral_Baguette on Reddit, who put together the Ever Given in-game using WorldEdit tools. The ship is 69 by 470 blocks, and was simply flipped 30 degrees to get the ‘stuck’ effect. As commenters on Reddit have noted, it’d be even better if the excavator was there, but Admiral_Baguette says “Might add it later. I spent 11 hours on the ship and just wanted it done so I could go to bed.”

For more cool Minecraft builds, you can follow that link.