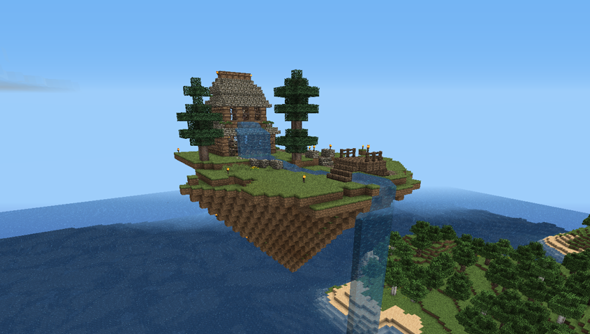 Lego has always been an obvious and apt point of comparison for Minecraft, and it wasn’t long before a petition on Lego’s idea-voting site spawned its first ‘micro-world’ set. We’ve since seen the forests, the caves and The Nether recreated as tiny plastic curios – but never at the familiar scale of Lego’s commercial sets.

These new full-size sets are different: they represent both the pastoral and pioneering sides of Minecraft, and are populated by minifigure Steves and skeletons.

Where previous sets were tiny cross-sections of typical Minecraft world design, the new range is conventionally-sized – i.e. actually suitable for playing with. One Minecraft cube appears to equate to one four-studded brick.

The Brick Fan have uncovered pictures of two sets from the range. The first is The Cave, which incorporates zombie and spider mobs, TNT, water and lava, and the “precious” obsidian that results from their meeting.

The Farm comes complete with cow, sheep, pumpkins, wheat, sugar cane and carrots. And the fences and jack-o-lantern aren’t entirely for show – a bow-and-arrow-wielding skeleton minifigure is included in the set.

Other, as-yet-unseen sets will be named The First Night, Creative Box, The Ender Dragon and The Mine.

In the past, Mojang have donated their 1% Lego royalty to charity. Do you think you’ll buy into one of the new sets? That minifigure Steve is perfect monitor-top fodder.