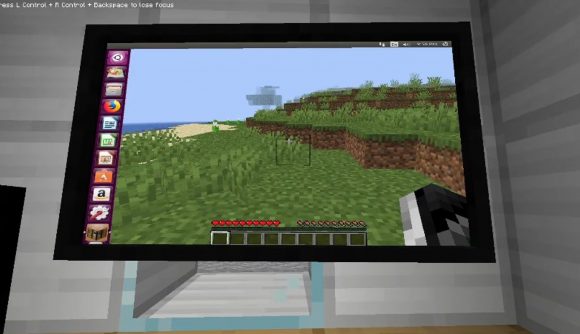 There’s many great Minecraft mods out there, but this latest one might be the pinnacle. Finally, after over a decade, Minecraft has peaked with a mod that lets us play Minecraft on a PC – in Minecraft.

A video of the grand Minecraft-ception was uploaded to YouTube by Mj11jM. In the five minute clip, a player walks up to a hut marked ‘Inception Room’, containing a PC sitting on the Minecraft start screen. Then, they play for a few minutes, wandering around the vestiges of a largely serene map, before exiting. The frame-rate’s a little choppy, expected given the layers of software going on here, but it works.

The idea sprung from a tweet by foone, a programmer who specializes in old, out-dated hardware, about making a working Windows 95 PC in Minecraft using VM Computers, a mod that lets you spawn and build your own custom PC in the sandbox game. Now, you can’t run Minecraft on Windows 95, but you can do it on a version of Linux that’s compatible with the VM components. Once the theory was considered in the thread, it was a matter of time, and here we are – thesis proven.

We previously reported on the VM being used to play Doom, meaning the classic FPS game has now technically been ported to Minecraft. It’s a funny little tool to play around with, given that it gets you a full PC. You can use it to take all sorts of trips down memory lane of nineties hardware, if you fancy. It can be resource hungry, since, as a virtual machine, it is drawing from the CPU and Ram of your actual machine, so do double-check all your hardware stats before you boot it up.

This isn’t the only blocky revelation of late – the community managed to discover the seed for Minecraft’s title screen recently, too, adding another entry in the long list of best seeds. As always, please mod with caution.

If you want to check if your PC matches the Minecraft system requirements, then use our tool and answer the question “Can I run Minecraft?“