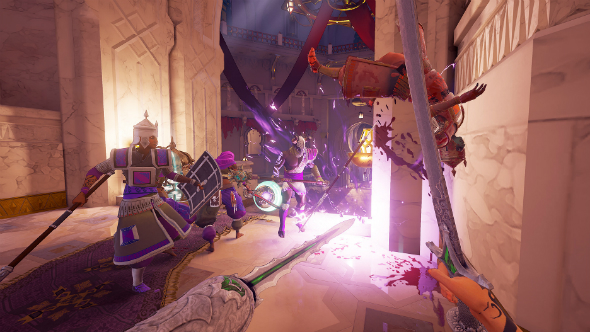 This is a sponsored post courtesy of Torn Banner Studios.

After lingering in closed alpha for much of last year, Mirage: Arcane Warfare is entering the final leg of development with a beta test. Torn Banner’s spiritual sequel to Chivalry: Medieval Warfare enters the big bad world of (slightly more) public testing today – 27th March – giving a larger group of people the chance to sample its synthesis of magic and metal.

For some low-budget brilliance, check out the best indie games on PC.

We’ve brought together all the information you’ll need to get started on day one with minimum fuss. 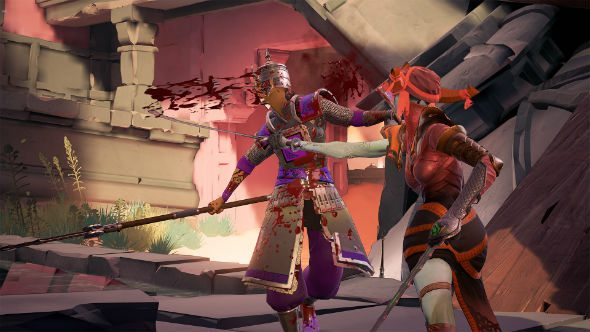 Mirage is a competitive first person brawler. Torn Banner calls it a “skill-based multiplayer FPS”, but depending on who you play, you might not fire a single shot.

The game’s primary focus is on combat with various melee weapons, supported by a variety of abilities both close quarters and ranged. Each of the game’s six classes is unique, providing a different set of skills and occupying its own role.

Skirmishes rely upon action and reaction. Unlike most online FPS games where the first person to turn the corner usually ends up dead, Mirage’s slower tempo creates drawn out fights for players who enjoy feinting, juking, and playing mental mind games with their foes.

Torn Banner is conducting a closed beta which means you can’t just dive on in. Instead the studio is making gamers jump through a hoop to get involved. The hoop in this case is a pre-order of the full game that grants full access to the Mirage beta, which is live now and will run until the game’s eventual release on 23rd May.

You can pre-order Mirage on Steam in Plain Jane Standard Edition or Lippy’n’Gloss Special Edition which contains the soundtrack and a copy of Chivalry: Medieval Warfare.

Those who already own Chivalry: Medieval Warfare receive a 10% discount.

What classes are available?

Players can choose from one of six distinct classes in Mirage that can be changed between at any time. Wise choices depend upon your team’s needs and your preferred playstyle.

“These honoured members of the Bull Guard use their size and physical strength to dominate enemies up close.”

Enjoy cracking skulls and hitting hard? The Taurant class may be for you. This front line fighter’s abilities can deal huge amounts of area-of-effect damage, however he’s also a lumbering brute where other classes are more nimble and can respond with greater speed.

If you’re new to Mirage and Chivalry, the Taurant is advisable as a first pick as his kit is immediately comprehensible: jump in and smash.

“An elusive and agile character that uses her mobility and speed to cut foes down.”

The Vypress is a mobile menace who strikes from unpredictable angles in order to take her enemies unawares. If she fails to eliminate her target in the first bout, she can draw out and dodge their attacks.

Her abilities focus on evasiveness and accurate strikes, allowing her to respond to aggression and then punish or escape. Technically, she’s a melee class, but a couple of tools allow her to pick off enemies from medium range if necessary. 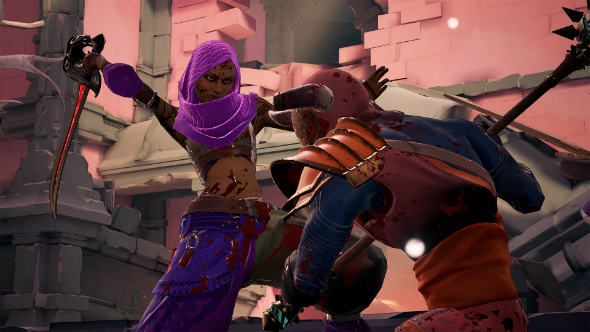 “A defensive trap specialist that uses her cunning and wit to defeat larger opponents.”

Tinker is designed to be the disruptive troll of the bunch, a fact that’s clearly represented in her animations and voiceover work. Always beware the class that’s capable of displacing enemies and dropping traps. 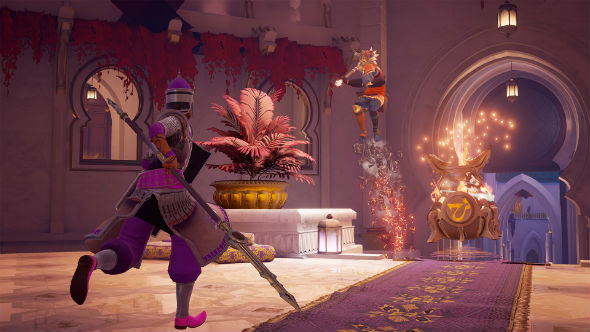 “A stalwart defender that supports her teammates with her control over the battlefield and knockaround capabilities.”

The Vigilist is capable of cancelling the enemy’s party then kickstarting her own. Her abilities focus on crowd control and negating incoming attacks, removing threats from play and giving her allies a chance to respond.

Her playstyle is highly responsive. An ill-timed Iron Dome, Surge, or Disperse ain’t going to do diddly squat. 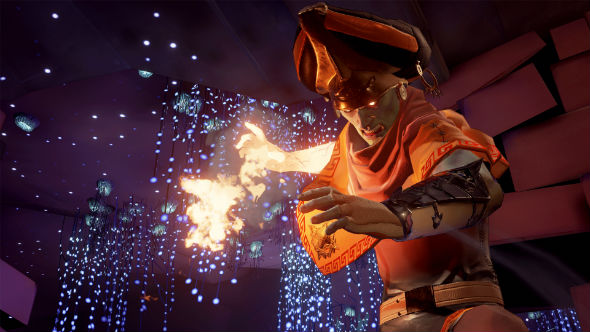 “Powerful Mage Class that relies solely on the devastating power and capabilities of their magic.”

The Alchemancer is Mirage’s only true ranged class: a marksman capable of throwing devastating spells at his enemies.

Unlike other classes, the Alchemancer has very few tools for dealing with up-close and personal foes. Once he’s used his teleport ability, his options for response are far more limited than the toe-to-toe brawlers. 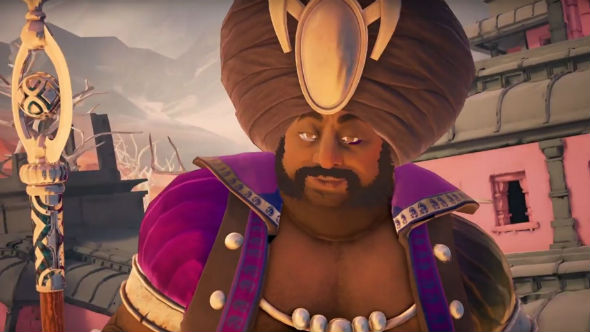 “Staff wielding hybrid that has a magic carpet and a mixture of offensive and support capabilities.”

The Entropist was unavailable during alpha and has made his Mirage debut on day one of the beta. Ta-da!

The portly man of magic is a hybrid class, bringing together utility and ranged damage with a dash of evasiveness. None of his active abilities are designed to deal damage up close, but instead allow him to aid his allies and escape when necessary.

He’s the only healer in the game, which means that other than the Vigilist, he’s the clear choice for players seeking a support role.

What game modes can I play?

Mirage features traditional game modes such as team deathmatch, capture the flag, and payload (known in Mirage as Push) alongside modes which feature capture points.

The only one of these modes worth explaining is Point Capture in which players must capture “glyphs” (aka capture points) by standing within them. This mode comes in two flavours: in the first, one team must defend glyphs from the other by keeping a presence inside them. In the second flavour, both teams are pursuing glyphs, which start out as neutral. Every time a glyph is captured, another is unlocked.

We’re fairly sure you’ll get the jist of these modes pretty quickly.

How many maps are there?

The closed beta features more than ten maps, some of which accommodate multiple game modes. As you’d expect, each one features Torn Banner’s take on Persian and Arabic architecture and is bursting with colour.

We’ve only managed to spend time with one map so far: Sunken City, which features a dilapidated ruin extending over multiple tiers. It’s filled with medium-sized rooms and narrow chokes which then extend out into much wider spaces where the skirmishes can more easily breathe. We definitely enjoyed its verticality and the atmosphere its visual style generated.

Torn Banner has also provided peeks into two other beta maps: Bazaar and Lighthouse. We haven’t stepped foot in these personally but their visual style is very much on-point. Hopefully they provide interesting tactical choices in addition to eye candy.

Sunken City offers Team Deathmatch and Capture Point modes. Bazaar is restricted to Team Objective. Lighthouse is either a Capture the Flag or Push map.

How does the lobby work?

Mirage is offering players two ways of jumping into games.

The first is skill-based matchmaking which will automatically group together players of similar skill ratings. You know the drill here: all you need to worry about is which class to pick. 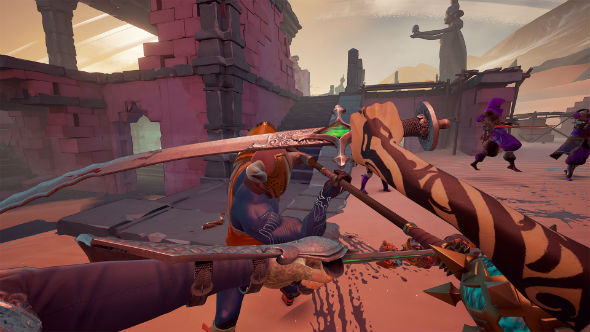 Fossils like ourselves, and those seeking violent japes without concern for even balancing may also enjoy the second option: old-school server browsing. Throw caution over skill-mismatching and fairness to the wind and enjoy one of the many custom games the beta has to offer.

Looking forward to trying out Mirage: Arcane Warfare? Let us know in the comments below.