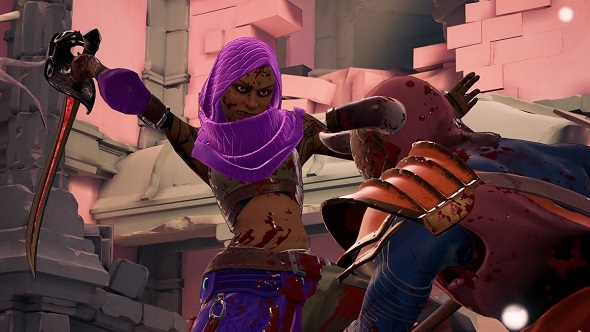 With the closed beta for Mirage: Arcane Warfare coming up on March 27, Torn Banner Studios have released 11 minutes of new footage, giving players a sneak peek at new abilities and two new maps coming in this closed beta. There is something for everyone in this footage, as it shows five of the game’s six classes in action.

If you’re looking for your multiplayer fix, take a look at these top PC multiplayer games.

The two new maps are Courtyard and Falcon Ridge, which play host to Team Deathmatch matches in this footage. As the name suggests, Courtyard takes place in a gleaming palace courtyard while Falcon Ridge has players scrabbling for the high ground, as players fight for control of the temple at the top of the ridge. Courtyard seems like a symmetrical map which rewards mastery of single combat, while Falcon Ridge requires players to work together as a team to hold the best map position.

Most of Mirage: Arcane Warfare’s classes get a look in during the 11 minutes of footage, from the shield wielding Vigilist to the trap wielding Tinker. Just from watching the fights, my favourite class so far has to be the brutish Taurant, just for the character’s fantastic Macho Man Randy Savage impression. Hearing him do Macho Man-esque “oohs” and “oh yeahs” while pummelling someone with a huge spiked mace is pretty great.

The only class which isn’t shown in this footage is the Entropist, which Torn Banner Studios are leaving as a surprise for the closed beta. If you want instant access to the closed beta when it launches on March 27, you will have to pre-order Mirage: Arcane Warfare over on Steam.