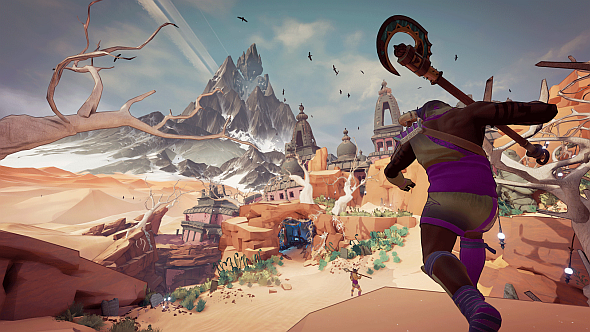 Mirage: Arcane Warfare, the first-person multiplayer brawler by the people who brought you Chivalry (the fighting game, not the code of conduct), has finally got a release date: May 23. Pre-orders go live later today and will get you instant access to the closed beta. Additionally, for 24 hours, Chivalry will be free to download and keep.

It’s more fun when you’re blowing up your friends. Do more of that in the best multiplayer games on PC.

Pre-orders go live on the game’s Steam page at 18:00 in the UK (BST) today – that’s 10:00 on the US West Coast (PDT). If you order the standard or special editions of the game, you’ll be able to jump right in to the closed beta, which goes live at the same time. Pre-order customers will also get an additional ‘friend key’ for the beta, so you can play with a mate.

“Mirage is at a crucial state of development, so we’re really looking forward to sharing what we’ve been so proud to work on in the closed beta,” says Steve Piggott, president of developers Torn Banner Studios. “Seeing and reading real reactions from gamers will help us tune the final product to make the ultimate skill-based combat game.”

To celebrate the impending release of its successor, Torn Banner’s breakout hit Chivalry: Medieval Warfare is also being made available entirely for free, for one day. The promotion hasn’t gone live yet – we’re assuming it’ll coincide with the 18:00 launch of Mirage’s pre-orders, so check Chivalry’s Steam page when the clock chimes six (or its equivalent in your time zone). Note this isn’t a free trial: you can download it and add it permanently to your library. We recommend doing so, as Chivalry is excellent. This will also make you eligible for a 10% discount that Chivalry owners will receive when pre-ordering Mirage.

You’ll be able to play all six of Mirage’s character classes in the beta – including the previously unrevealed Entropist – plus eleven different maps and five gameplay modes.

Though it’s a closed beta, Torn Banner are permitting broadcasting, so expect a ton of gameplay videos to hit YouTube when it goes live.