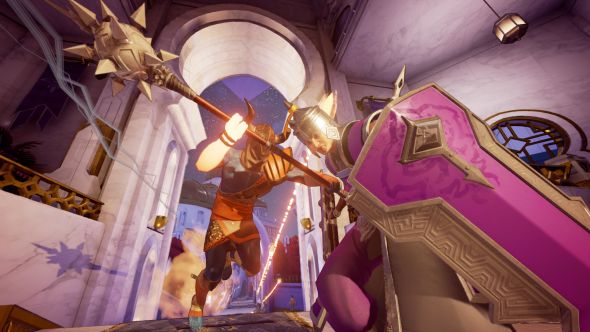 The time has come again for your PC to trill to the song of over-acted screaming. Yes, Torn Banner have released another class trailer for forthcoming magic brawler Mirage: Arcane Warfare.

Face your challenges together in the best multiplayer games on PC.

Spattering your screen with gore this time is the Vigilist, a defensive (but still destructive) arcane warrior who wields a shield and spear. The Vigilist is all about protection and battlefield control: she can protect herself with a shield bubble, reflect enemy attacks back at them, pull enemies back or knock a crowd of them away. Here are her abilities in full:

Mirage is the follow-up to Chivalry: Medieval Warfare, spiced up with magical abilities and a pastel-hazed, Arabic-inspired setting. Gameplay looks much more varied, and just as brutal.

Head to theMirage websiteto sign up for the beta, due later this year, and check out our previous coverage here.The game is due later in 2017.