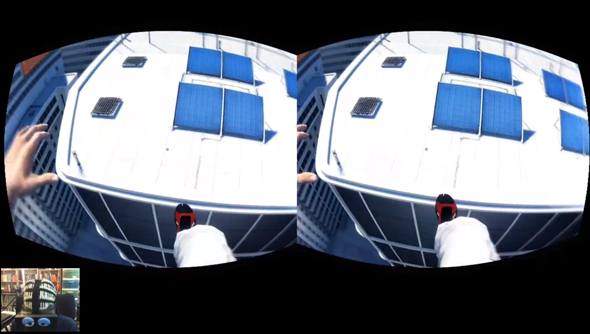 Internet, bear with me. For a while from now, as each new game that gets support for the Oculus Rift, I, and other writers, will get needlessly excited and post videos of said game in action. This will settle down in time and normal activity will resume. Until then: virtual reality Mirror’s Edge.

Still looking amazing years after its release, Mirror’s Edge is a natural fit for the Oculus Rift. It’s easy to imagine that, had the Rift existed during its development, DICE would have adopted the headset for the game while producing it: they chose to make a first-person free-running game, when arguably the more natural design move would have been third-person (to show off all the fancy acrobatics), and, so, committed to immersing the player into the act of running, something this video demonstrates is much more potent while wearing a headset.

Had they had the chance to integrate the Rift then we might have been spared the fourth-wall breaking forced head movement cutscenes. As it is, while playing with the Rift I can imagine any time your view is controlled by the designer, and not your own movements, it must be illusion-breaking, much more so than when you are simply viewing the action on a screen.

Still, it looks ace. If you’re in possession of an Oculus Rift (you lucky person, you) then you can get Mirror’s Edge working with the headset by installing Vierio Perception and the FOV mod.