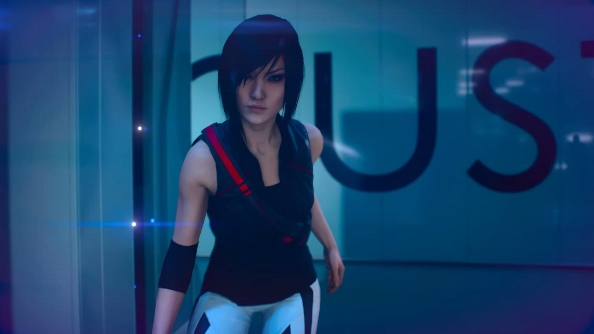 Almost a decade after we last visited DICE’s dazzling corporate dystopia, we can finally slip on our running shoes again and leap across skyscrapers in a new Mirror’s Edge. Catalyst retains the bold art direction of the original game, but adds a new level of next-gen shininess to every surface in view.

The game is available multi-platform, but does that mean the PC version has been left behind in the race? Only one way to find out: on your marks, get set, let’s port review!

Mirror’s Edge Catalyst, while looking incredibly similar to its predecessor, is set in an open city. Typically the more open your environment, the harsher it is on your system, but that’s not really the case in Catalyst. That’s almost entirely down to the art direction of the game: a collection of bold, flat surfaces with a palette of colours barely three deep, it’s not a busy-looking game. It’s incredibly simple, and that does wonders for the atmosphere. It feels clean, clinical, and liberating, while simultaneously being a little bit sinister.

Much of the graphical value from Mirror’s Edge comes from the lighting effects, which impact literally everything in view. Thanks to the city being made from glass, high-gloss plastics and polished metals, there’s few surfaces that don’t have beautiful reflections. It really is a unique look. 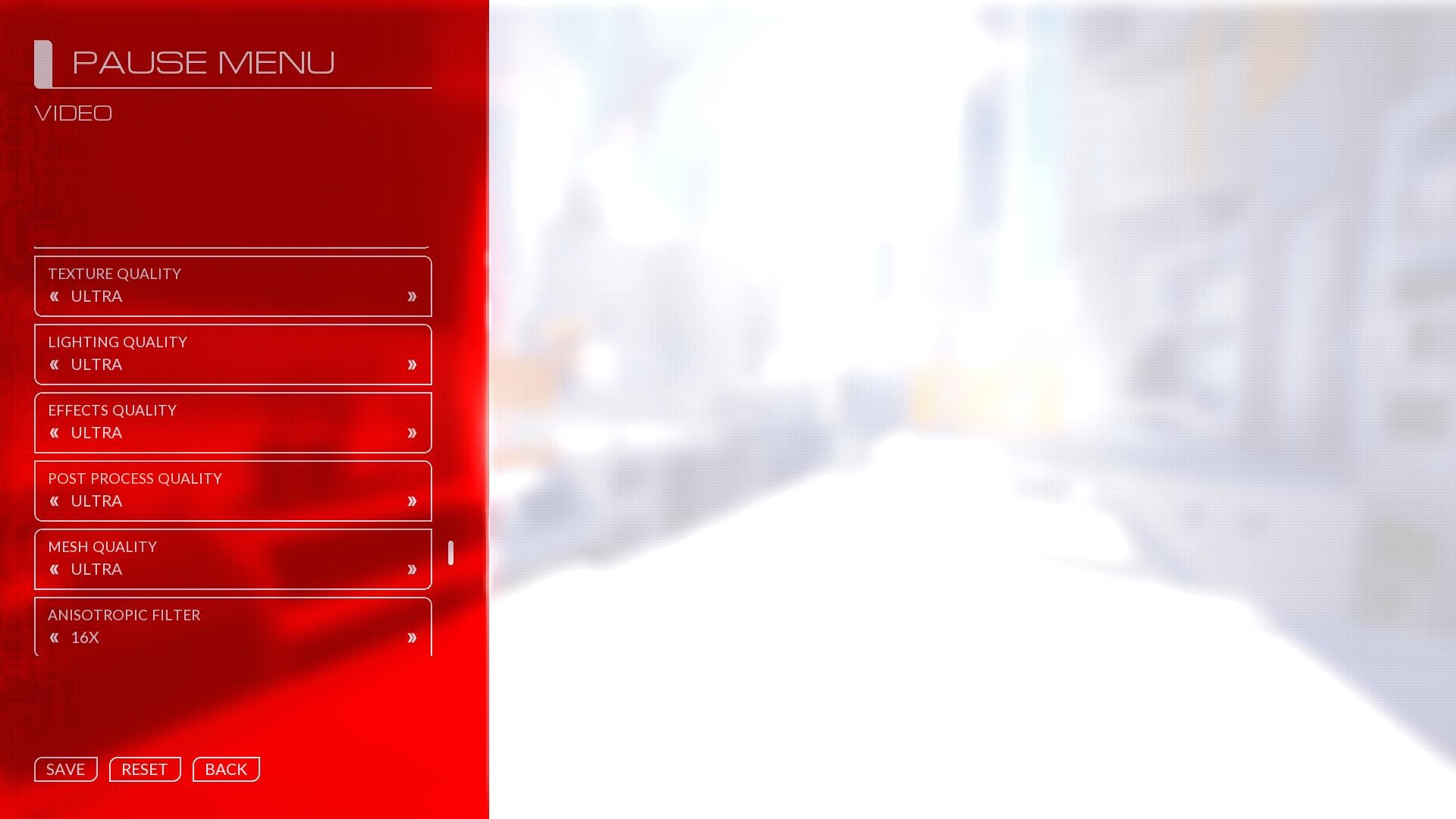 Opening up the menus, you’ll find a solid, if not extensive, range of options to mess with. All keys can be re-bound, and invert options apply to both controller and keyboard. The game feels far more at home on a controller (I play with an Xbox One pad) but there’s no real issue with the keyboard set-up.

On the graphics side, there are four pre-sets: low, medium, high, and ultra. There’s the option for the game to auto-detect your hardware and select the ‘best’ options, or you can create your own custom set-up. If you tweak the settings yourself, you have the ability to adjust the quality of textures, lighting, effects, and meshes, as well as the anisotropic filtering, ambient occlusion, and motion-blur.

V-sync can be turned off, which will handily un-cap your framerate, and there’s a field of view slider. This by default is at the very lowest value, but cranking it up makes a world of difference. Handily the settings menu still shows an in-game image to the right-hand side, so when adjusting the FOV you can see exactly how different it looks before deciding what setting to pick.

Let’s take a look at the game in action to see how the graphics presets look. 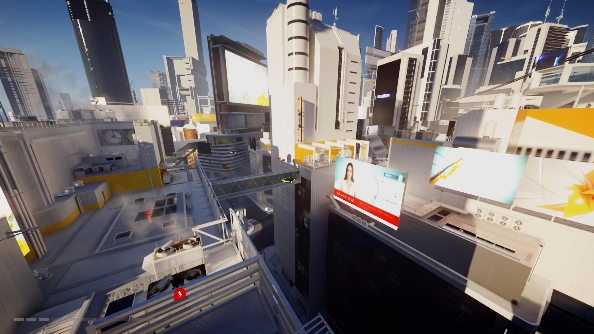 Pushing the game to its limits, ultra offers the most beautiful version of Catalyst’s city of glass. AA is at work pushing out all the stops: you can see the multiple slats in those huge fan vents to the left of the screen, which will gradually disappear as the settings are reduced. Surfaces beautifully reflect the world’s lighting, be that in just glowing highlights or full-reflections on windows.

You will notice the pop-in though, which is present on quite a few surface textures. For me Ultra runs at framerates in the 50s, which whilst perfectly playable and much better than the 30fps we’re often used to at highest settings, is still not the most ideal rate for a game so focused on speed. 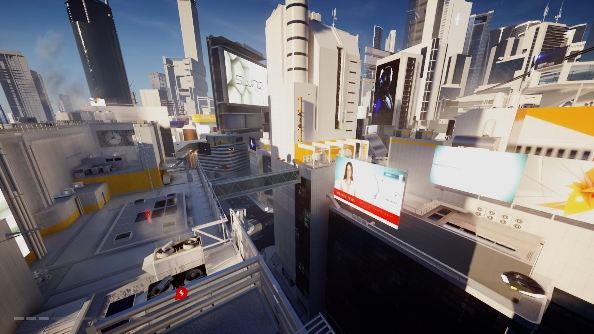 At high the differences are subtle. So slight, infact, that it’s difficult to see the change. The lighting is still beautiful, the blur effects when Faith makes a heavy landing are smooth, and the trail of ‘Runner Sense’ that guides you through the world has an almost smoke-like appearance. The pop-in that ultra suffers from makes far fewer appearances, though.

Whilst the city looks almost identical to ultra settings, at high there is a good performance boost. My test system ran smoothly at 60fps, offering a great balance of beautiful 1080p visuals with a framerate ideal for the game’s sprint-paced activities. It’s the strongest option by far; ultra just doesn’t offer enough pizazz for the performance hit. 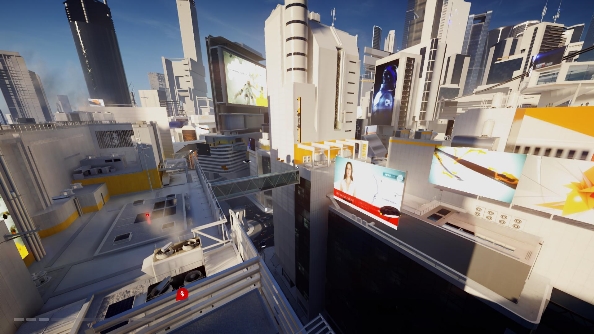 Adjusting the settings to medium results in a more notable change. While the world still looks like Mirror’s Edge should, with its stylish lighting and polished surfaces, it does shave a few areas back. You’ll notice those fan vents I mentioned earlier have fewer slats in the cover. The draw distance on the shadows is far shorter: the cylindrical tower’s advertising sign no longer casts a shadow. While running the motion blur effects are simpler than the higher presets.

On my system the framerates stayed happily in 70s at medium settings. That’s certainly nothing to be grumpy about, but not a huge jump above high. It’s obvious you have to make a few sacrifices for those extra frames, but the result of that trade off isn’t really worth it. 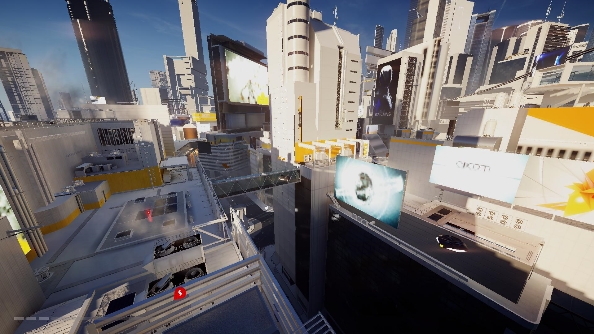 When bringing the game down to its lowest settings you can see that the game’s art style, while still striking, doesn’t really help players with weaker systems. Indeed, low settings make the game look very ugly. Rather than feeling intentionally minimalistic, things look basic. The most obvious issues are in the lighting and reflections; shadows are chunky and pixelated, and surfaces don’t shine or reflect the sunlight. The world looks flat and false, and there are notable jagged edges on the geometry. When running you won’t see motion blur as Faith slams into the ground, and Running Sense looks chunky instead of smokey.

The billboards around the city get the worst treatment though; on every setting above low they’re giant screens with animated advertisements. On low they’re reduced to nothing more than static low-res posters that look like they were drawn in Minecraft.

You will, however, get spectacular frame rates on low settings. My system pushed out 120fps for the most part, sometimes hitting 150fps when environments were less open. Clearly the game’s lighting system is quite demanding, but without it Catalyst looks hideous.

Indoor environments offer a good, concentrated look at how shadows and reflections change between the settings. Below is one of the game’s safe houses on ultra and low settings. You can clearly see how ugly the lighting is on low, with shadows that would only look at home on a Nintendo 64. At ultra settings props like the table gain surface reflections, and the effects of the lighting on things such as the coffee mug and vent shaft make them appear far more realistic and physical. Textures are also notably better, such as on those books on the floor. 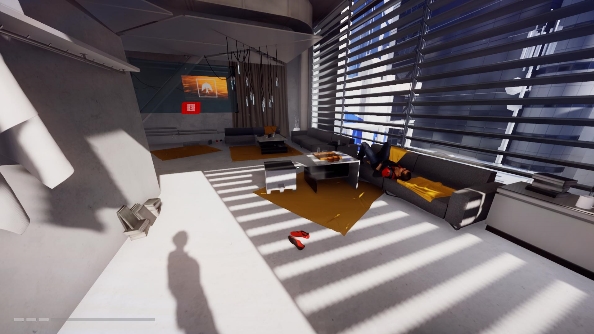 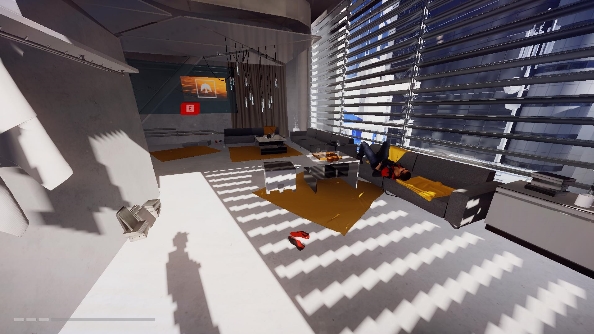 So does Mirror’s Edge Catalyst on PC win the race? It’s not a port that goes above-and-beyond (you won’t find any colourblind options or things of that extensive ilk), but it does pretty much everything you’d hope for. That’s no real surprise considering DICE’s heritage, but it’s nice to know that Mirror’s Edge, which doesn’t have the same PC legacy of the Battlefield series, gets the same level of attention.

And thanks to that clean art design and a world that’s fairly solitary, there’s little to hammer your rig with. Provided you’ve got the grunt to power those lighting effects, it’s all systems go. Mirror’s Edge Catalyst is absolutely at home on the PC.