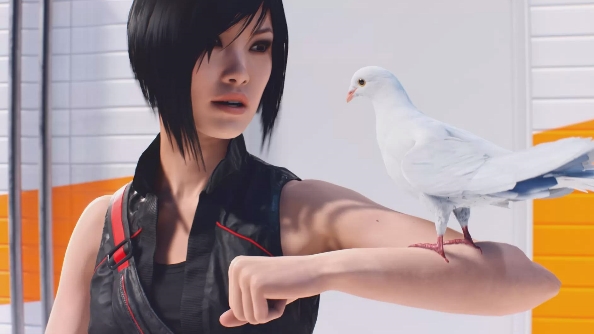 In 2008 EA and DICE broke the first-person mould with Mirror’s Edge: a game that, despite its heavy flaws, became an instant cult classic thanks to its novel focus on freerunning. For almost a decade fans have been begging for a return, and finally it’s here. Mirror’s Edge Catalyst is a reinvention of the parkour game for a modern audience; a slick, skillful ride through a world where your speed is more important than strength. And it’s a game that unfortunately also suffers from the deep imperfections of its predecessor.

Love yourself an open world? Dive into one of the best sandbox games on PC.

The big new advancement over the original Mirror’s Edge is Catalyst’s open world. A seamless environment, it’s a breathtaking land of minimalist Scandinavian design and dazzling lighting effects. Split across five districts, there’s a unifying theme of simplicity, but notable differences separate each zone. The orange-highlighted starting area is heavy and industrial, while the purple harbour sector with its balconies, cherry blossom trees and water features is clearly home to the rich and powerful. 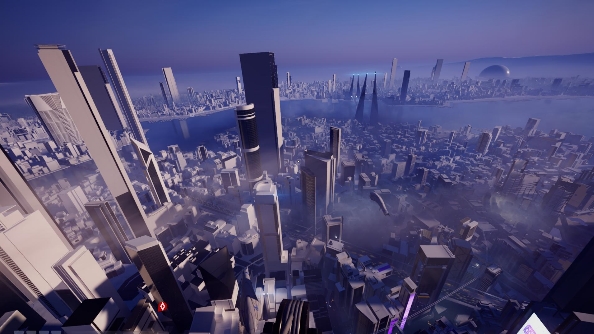 Populated by just a few scattered NPCs and the odd grouping of security guards, it’s clear that this is not an open world in the mould of Assassin’s Creed or Grand Theft Auto. It’s lifeless; lacking in any of the elements most sandboxes offer to convince players they’re in a replica of reality.

However, after a few hours of play you’ll realise this is by design. Catalyst isn’t trying to be an open world of that ilk. Instead, it’s an open world sports game. Think of titles like Skate and the modern Need for Speeds and you’ll begin to understand how the city of Glass has been constructed. The multiple tiers of verticality and empty buildings are there to offer you sprinting tracks without limits. It’s a colossal freerunning gym, a parkour playground. Crowds of people and places to visit would destroy the flow.

Everything in this world is focused on parkour. DICE have avoided the typical sandbox approach of having quests that offer numerous gameplay styles, with every activity dotted around the environment designed to be purely about getting from A to B in fast, fascinating style. They come in a few various guises: dead drop deliveries require you to get a package to a location within a strict time limit, sometimes demanding you avoid guards or heavy falls that could break the item. Diversion tasks see you run between a series of checkpoints, grabbing the attention of enemies and leading them on a wild goose chase. 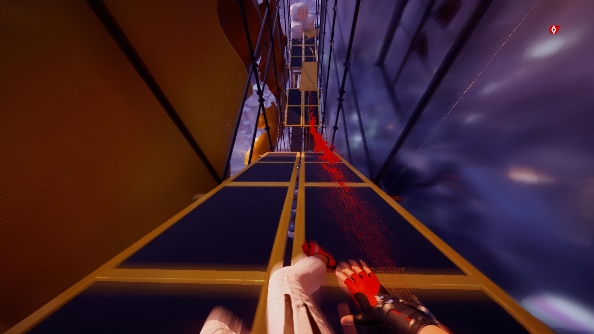 The most enjoyable challenges by far though are Dashes: running courses with goal times to achieve. Each has a rating of up to three stars, and your time is recorded on a leaderboard alongside other players.

There’s a social element to that, but more than anything it emphasises Mirror’s Edge’s sportsmanship. The first few times you run a Dash you’ll inevitably fail, but with each new attempt you’ll shave a second or two off your time. And when you’ve managed to get one star, you’ll try again and again in pursuit of all three. It encourages self-improvement in a manner few other single-player games do.

That self-improvement comes from a deeper understanding of your moves and the world. You’ll soon begin to memorise routes and chunks of the city. Discovered shortcuts begin to take priority over the red snake-like suggested path trail. You come to understand that if you jump a second before you think you should, you can leap onto a railing and springboard off it, rather than scramble over. With each new challenge you become more confident in your freerunner skin. It’s a mentality that offers a far better sense of achievement than the largely pointless skill tree, which is mostly unlocked before you even start the game.

Running will feel familiar if you’ve played the original, but it’s certainly been refined. You’ll still find yourself falling off things with a certain degree of frequency, but there’s much less of the context-specific pitfalls the first game suffered from. You can also use a grapple, with which you can swing across chasms, zip-line up the side of buildings, and pull down obstructions. It can only latch to specific hooks in the world though, so while it adds a welcome bit of diversity to running, it feels only a smidgen of its true potential. With better implementation it could have been a useful tool rather than a novelty. 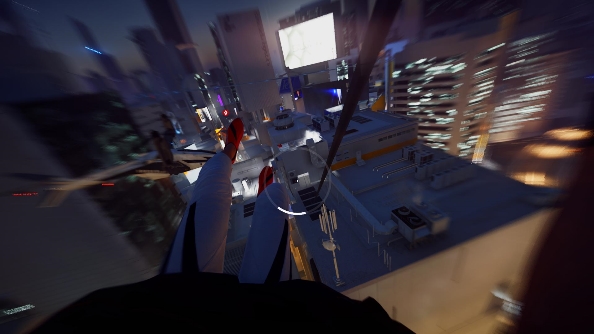 The final point to be made of Catalyst’s open world is collectables, of which there are several hundred. I was initially concerned that seeking out security chips, glowing ‘gridLeak’ orbs, and secret documents would encourage exploration of a sterile word that can offer nothing to a curious player. However, many of the items are placed on typical running routes, meaning grabbing them feels more like collecting rings in Sonic than feathers in Assassin’s Creed. On the whole these collectables are nonsense, but at least they’re non-intrusive nonsense.

Collecting items, as well as completing activities, unlocks some basic extras, including ‘ghosts’ which will show up in social play when people are following routes you’ve set. Aside from the leaderboards, Mirror’s Edge allows players to interact with each other by setting their own courses. They’re essentially player-created Dashes, and seem a neat way of keeping the game alive, especially if players are imaginative enough to make challenging routes.

As a sandbox game, Catalyst is wonderful. It brings the strongest mode from the original game – the time trials – and makes them part of the main world. That leaves us with the campaign missions and Faith’s story. And that’s where the bad news begins. 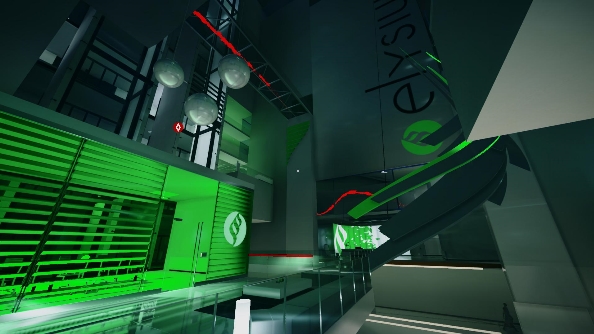 Having been long years since the last game, DICE have wiseley rebooted the series, bringing across protagonist Faith but importing little else of the old world. Set ‘before’ the first game, the events that happen in Catalyst’s campaign make it appear that nothing you remember is considered canon.

That’s hardly an issue considering the previous game’s plot was dreadful, but unfortunately that glaring flaw returns for Catalyst. The cast is made up of shallow characters of which the only praise I can offer is that they are nicely representative of all races and genders. The narrative drearily follows the tired beats of ‘protagonist has McGuffin the enemy really wants’. There’s little to tempt you into playing through Catalyst’s story aside from the fact that it’s there to be done.

The 19 story missions are a combination of bland objectives and genuinely great level design. At their worst they’re a sprint from A-to-B with seemingly nothing happening, and without the time-limit thrill of the open-world activities. At their best they offer Tomb Raider-style environment chaos, climbing, and breathtaking leaps, but in moments that are too few and fleeting. 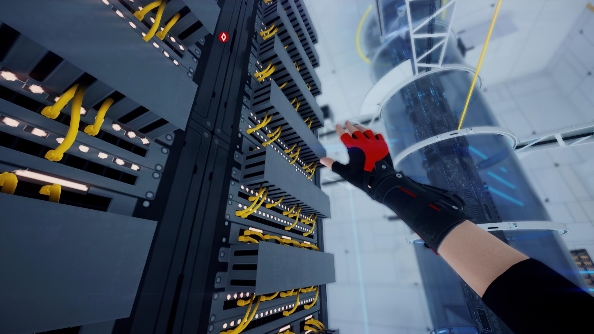 Tall indoor environments are often the stage for story missions, where sometimes the running is cut short in favour of climbing. As a platformer the game works rather well; it forces you to think in the manner of a rock climber, assessing every potential jump and surface rather than following hand-holding environmental signposts. It’s the touch of variety that a game so singularly focussed on running requires.

What it doesn’t need, however, is the combat. Once again fights with corporate security returns, and to their credit DICE have improved it significantly. Faith can no longer use guns, and a smooth side-step mechanic allows you to circle around guards and kick them in the back. The environment plays a heavier role: there’s few things cooler than vaulting from a balcony, decking a guard as you land, and sprinting away.

But that’s rarely how it pans out. As the campaign progresses it forces you more and more into areas where you’ll have to face off with a group of guards, sometimes even having to ‘survive until x happens’. And while the combat system is passable against one enemy, against a group it’s laughably inept. The mechanics encourage you to push enemies into each other, where thanks to the dreadful AI they scramble about like marionettes with their strings entangled. But should they get the drop, you become the target of a mob kicking with little way out. 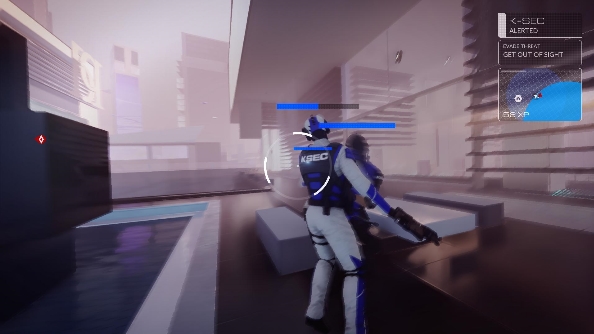 I recognize that for the setting to work, and even to add a sense of drama, combat should be part of the game. But even when it’s present as little as it is in Catalyst, without perfect execution it really damages the experience.

The campaign is the chasm-like flaw that runs through the heart of Mirror’s Edge, given buoyancy only by the fantastic parkour that underlines everything. But I keep asking myself the question: is the running enough? If Catalyst was a pure parkour sports game I truly believe it would be. But it’s not: Mirror’s Edge is a sci-fi action game. The campaign is too much a part of its DNA to get a free pass.

Mirror’s Edge Catalyst is an exceptional sandbox. There’s nothing in the entire medium that feels quite as unique as being able to sprint, duck, and dive towards the horizon, making the most of the many varied paths on offer in this superbly sculpted playground. But when the game tries to be more than that, it begins to fall apart. Catalyst is certainly a step forward for Mirror’s Edge, but not the leap that it could be. If this is the return of Faith on a regular basis though, DICE have created the foundations for a very strong sequel indeed.