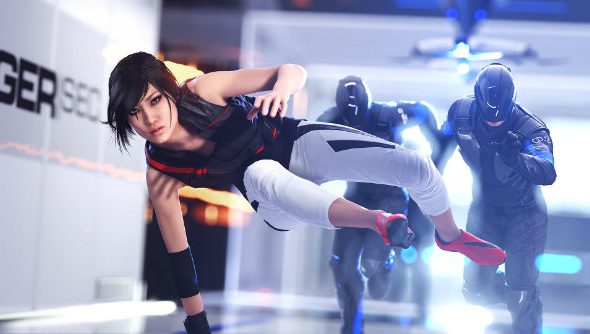 Mirror’s Edge Catalyst is shaping up to potentially be something special indeed, and each trailer and developer diary that’s released gets me more and more pumped about a return to the rooftops of its clean, glassy metropolis.

If you want more on future releases, check out our list of upcoming PC games.

This latest developer diary shows off a few new things. The developers talk about combat and how Faith will have to take down the various enemy archetypes in different ways, but without guns.

There’s a bit in there about how the open-world will work, and how it opens gameplay up to allow players to create their own routes, rather than picking from a small, predefined selection.

Even the way the soundtrack has evolved sounds great, it adapting to what’s going on – more percussion comes in when you’re running, and it drifts off into chords when you’re taking in the crystal horizon. Have a watch:

If you missed last week’s combat and movement trailers, you can check them out here.

Mirror’s Edge Catalyst will be available on May 26.