I’m so happy Mirror’s Edge is getting a sequel, or reimagining, or whatever – you’re not my dad! Anyway, the first game had so much promise – felt really fresh, had a striking visual style, with its clean lines and primary colours, and it even had a couple of standout moments.

For my money, one thing let it down: the guns. Every time you picked one up, the pace completely vanished. It had an unrivaled sense of momentum, with Faith building up speed the longer you’re running, but every time you had a gun in your hand the brakes were squeezed tight and took away the game’s best asset.

Mirror’s Edge Catalyst has done away with the gunplay, expecting you to use momentum to cripple your enemies. This new trailer from the Tokyo Game Show displays some of that – one scene sees Faith knocked down, she then rolls backwards and runs up a wall only to pounce off and land on the security guard. 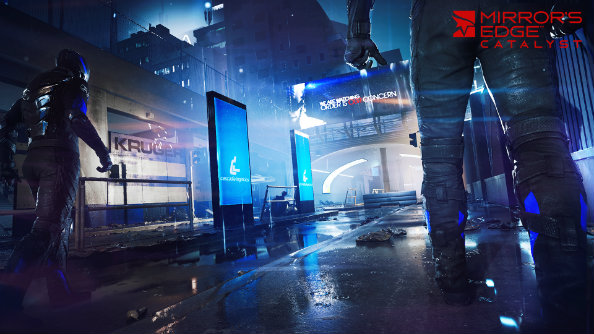 There’s flashes of the city, which looks Bladerunner-esque in one shot, but returns to its clean white and splashes of primary colours in another daytime scene. It looks like we’ll be getting more variety in the environements this time while still retaining that trademark style.

The story is hinted at, too. It looks like Faith is being escorted out of prison at one point by a security guard for KRUGERsec (my guess is these are the big bads), only to return to a life of crime once released. There is also a man with a dove. Ignore that PlayStation logo and check it out below:

Mirror’s Edge Catalyst is planned for release on February 23, 2016.