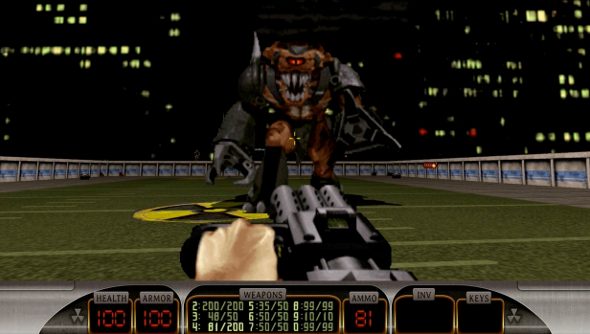 Mods can give a game something akin to immortality, where new content keeps being churned out years after the title’s been released, even after the original developers stop supporting it with patches and updates. I was once swallowed up by the vastness of Neverwinter Nights’ range of mods and even went on to co-develop a persistent world (which were basically community run MMOs) where I spent more time DMing and building that I have spent playing probably any other game, and even now there’s a community continuing this.

Given that, it’s really not all that strange to see Duke Nukem 3D, which is significantly older than NWN, getting Steam Workshop support. Duke Nukem 3D was a modder’s paradise once upon a time, and with the release of the Megaton Edition earlier in the year, life has sprung from it once more. While it used to be a great game where infant modders could take their first steps, with Workshop integration now you can actually get the word out that you’ve put together a new map for a game that’s old enough to leave home and get married.

Conveniently, there’s a guide for publishing the mods on Steam, so you are really running out of excuses not to do so. With Doom’s anniversary just behind us, what better way to celebrate the bygone era when FPS maps were complex works of art instead of fat bits of window dressing than by fashioning a map for Duke Nukem. The Megaton Edition is dirt cheap right now to boot, so get cracking.