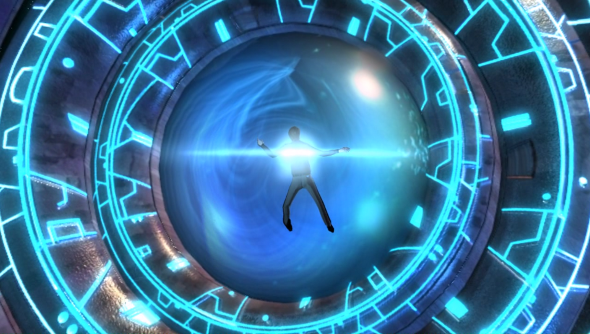 Jane Jensen is a name with weight. Her Sierra adventure series, Gabriel Knight, is right up there with the giants of the genre like Monkey Island and Kings Quest. Gabriel Knight’s first outing is getting the remake treatment, but in the mean time, we get Moebius. On the surface, it’s a spiritual successor: a flawed but brilliant protagonist, historical conspiracies, metaphysical mysteries – it’s all there, evoking Jensen’s most famous creation.

But there’s so much missing; a game with so many holes it looks like it’s been put in front of a firing squad every day for a week. If it is a successor, then it’s Nero taking over from Claudius. But like the loony emperor, it has some interesting ideas. They just never go anywhere.

Malachi Rector doesn’t just have one of the world’s silliest names, he’s also an appalling human being. Rude, aloof, judgemental, misanthropic and not nearly as clever as he thinks he is – he is not a protagonist you want to have to spend time with. But unpleasant people can, on occasion, be interesting to follow around. Sherlock Holmes is the archetypal detective that Rector most resembles, and there’s no denying that Holmes is a fascinating fellow.

But unlike Holmes, Rector is no detective. He’s an antiquities expert, travelling around the world to tell people if their priceless antique is genuine or fake and giving his clients the historical context of the objects. His job in Moebius, however, tasks him with a different trial. He is hired to investigate people, not antiques, and is initially only given vague reasons why. 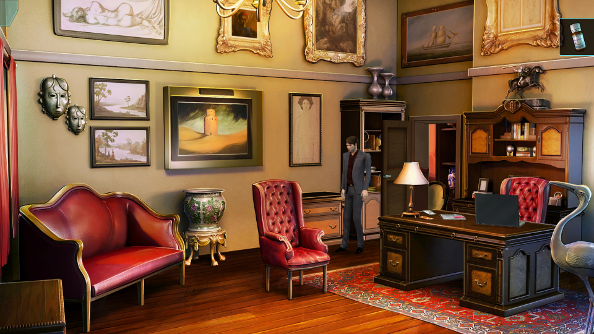 This is how Moebius lures you in. It sends you off on a trip all over the world only feeding you small bits of information. It’s a jigsaw puzzle, so of course you want to put it together. And while the pieces are all scattered around, it has the potential to be an intriguing mystery. This potential is rather quickly eroded.

The first clue that something is not quite right is during Rector’s job interview at a secret government agency. He’s given some information about a dead artist, and asked if he resembles anyone from history. Rector, being a history buff, seems to know everything about every historical figure, and compares snippets of the man’s life with snippets of the lives of several artists from history. He’s basically playing Guess Who? History Edition.

It’s ridiculous of course. Rector gets given the job because he can see these the commonalities between people – but this is something we can all do. I was doing it throughout the game and I’m an idiot. Moebius makes it seem like it’s magic. Or at the very least only something that a chap with an IQ of 170 could do.

And off he is sent, to explore Venice, Egypt and New York – all presented with vibrant, detailed backgrounds, in stark contrast to the nightmarish character models – for clues, but mainly so he can be exceedingly rude to people and treat just about every woman he meets like they are jealous seductresses. 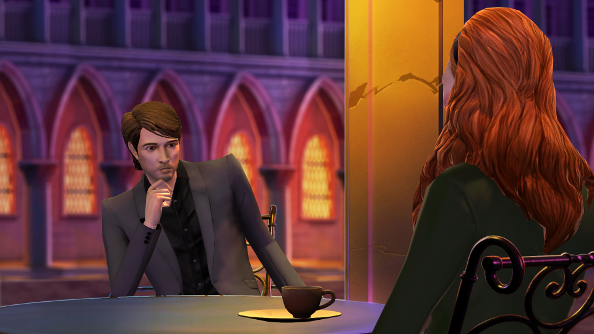 While he’s looking for these connections, random factoids about a person’s life, he also flexes his deductive skills, breaking people down. People ostensibly become puzzles. More potential wasted, unfortunately. Clicking on the appropriate icon brings up a static image of Rector’s victim. When Rector’s done “analysing” someone, they are most definitely a victim. The image has hot points peppering their body, a frown, crossed arms, torn clothes, and Rector makes utterly absurd assumptions based on these observations absent any context.

There are no real deductions to be made. Each hot point has three possible observations, any of them could be right, but only one is accepted by the game. Instead of deducing which one makes sense, it’s all about working out what the game wants you to pick. If a girl has ripped clothes is it a fashion statement? Or is she just poor? There’s no reason that it should be any of these, but in the case of women in the game, it’s usually the one that makes them look the worst. Poor it is.

It’s a weak attempt to emulate Sherlock Holmes’ split second deductions, but there’s never a single instant where it feels like you’ve come to a clever conclusion. It’s just random guesses and one of them happens to be correct because the game is written that way.

There was the opportunity to litter the game with non-traditional puzzles and real detective work, exploring what makes people tick, stripping away their lies and revealing their secrets. But this opportunity is never realised. 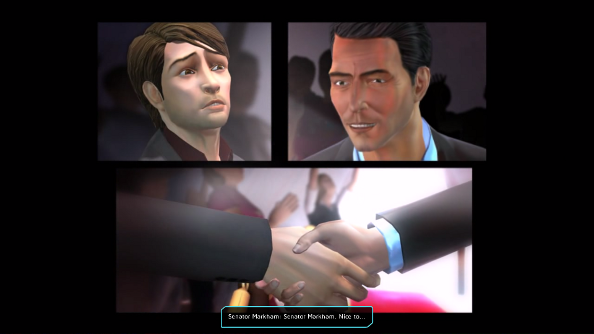 When it falls back on the traditional point and click tropes, it struggles there as well. There’s not one solid puzzle in the whole game. No moments where you’ll find yourself scratching your head and using all your brain power to solve a right bastard of a brain teaser.

There’s the occasional “stick a couple of objects together to get something else” puzzle, but most of them are even simpler than that already infantile excuse for a conundrum. And there’s a maze puzzle. Hooray! We do love them. God, it’s exasperating. It’s padding and nothing more, and to make matters worse, the maze must be navigated twice, by two different characters.

Yet there are some elements contained within Moebius that would have served it well had there been any compelling puzzles. Inventory management is a doddle, for instance. Rector won’t pick up an object unless he knows that he needs it, so there’s no clutter. It does mean that backtracking is often required when a puzzle that requires that particular object has been identified, but what item is needed is usually hinted at, requiring just a bit of extra attention.

Rector’s phone is an extremely handy little device. On it, he’s able to search the internet for clues, research individuals, build casefiles on antiques and people and communicate with his client. There’s also a hint system built into it, but I can’t for a second imagine a situation where someone might need that. 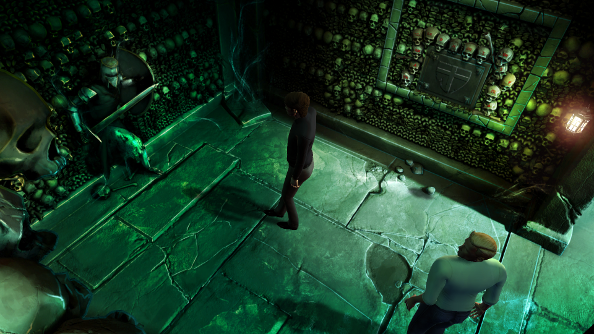 Tonally, Moebius is all over the place. One moment it’s a hammy, light-hearted romp around the world complete with puns and fighting ninjas, the next it’s hamfistedly bringing up rape or forcing players to assault a woman.

This problem with tone is best characterised by David Walker, Rector’s bodyguard. Beyond his love of bad jokes, he has no personality. He’s an ex-soldier and that’s all he really is. Yes, sir. No, sir. He’s a bore. But throughout Moebius, we’re lead to believe that Rector and Walker are going to knock boots. It’s heavily implied, even though neither of them have a clear sexuality. There’s no real reason for them to like each other, beyond some metaphysical mumbo jumbo, it’s just thrown in there. Like almost everything in Moebius, this relationship goes absolutely nowhere.

There isn’t a single thing Moebius does well. The story bobs up and down, sometimes dangling mysteries on the line, but there’s never any real payoff. At points it devolves into sheer lunacy, losing all semblance of reality. It’s tempting to just reveal spoiler-heavy plot points because you probably wouldn’t believe me anyway. 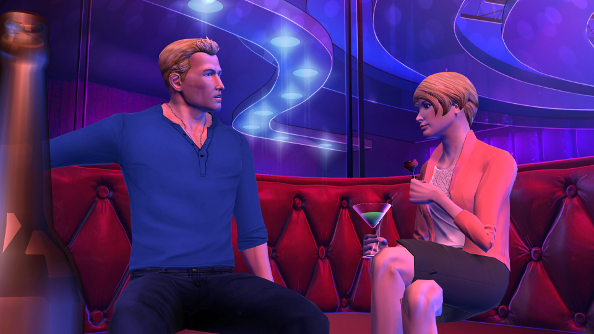 But other than the moments where Moebius unleashes torrents of barminess, it’s just painfully mediocre. I confess that I almost sought the occasions when it went truly round the bend because then at least I could laugh through the pain instead of just sitting there, bored, no more engaged than I would be while eating a bowl of bran flakes.

Yet, there’s a competency behind it. As banal as the puzzles are, most are steeped in logic and don’t feel like arbitrary obstacles stopping players from getting to the next screen. And a love and enthusiasm for history permeates the whole game, just as it did in Gabriel Knight, giving it an air of gravitas.

The recipe for a good adventure game is there, but the measurements are all wrong. Rector is too flawed, the puzzles are too easy, the metaphysical elements get too ridiculous are not well explained – everything is just off.

Had I not known that this was the work of Jane Jensen, I honestly wouldn’t have believed it. And when there are so many adventure games coming out during this renaissance, it’s hard to see why anyone would choose this over, say, The Walking Dead or one of Daedalic’s traditional, bloody hard adventure games.