Between Monster Hunter's relatively recent arrival on PC and a burgeoning scene of monster-catching indies, Monster Hunter Stories 2 is arriving on our beloved platform at just the right time. Like its 3DS-exclusive predecessor, Stories 2 is a spinoff with two key differences from the main series: a vibrant, Saturday-morning-cartoon presentation, and a Pokémon-style turn-based battle system.

In Stories 2 you play as a monster rider rather than a hunter, which means you're able to forge bonds with monsters. This distinction is mostly evident in the narrative, where learning to coexist and work alongside hunters is a core thread, but there's little evidence of this distinction outside of being able to assemble a party of friendly monsters – called monsties once they're tamed – and fight alongside them.

You still roam around gouging, slicing, hammering, and hacking wild monsters into little pieces so you can harvest their skin and use it to craft weapons and armour. There's no gore, but you can only gloss over so much of what's happening when you return from the smithy wearing the horns of a Diablos as shoulder pauldrons. I can't help but chuckle at how willing my monsties are to pitch in with my mountain man-like quest to adorn my character with body parts and fur.

To expand your collection of monsties you need to snatch eggs from monster dens, which come in standard and rare variants. Dens can be found all over the world, but if you’re after a specific monster then you can force it to retreat to its den by weakening it in battle and throwing a paintball at it. Once you’re at the nest – usually in the shadow of the slumbering beast you just battered – you can choose between a few different eggs to smuggle away and hatch at the stable. 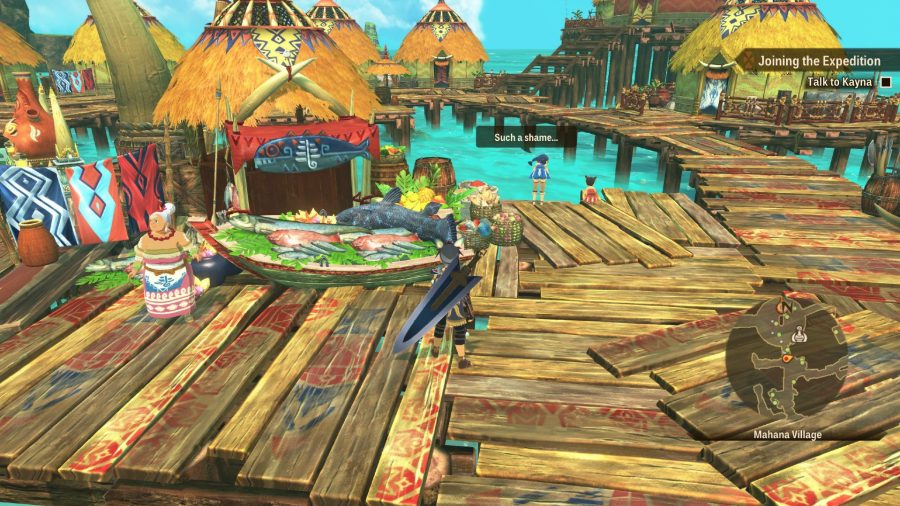 Monsties don’t take long to level up to parity with the rest of your party, so you never feel like you’re being punished for wanting to expand and experiment with your lineup. This is important, because you’ll need to have a deep roster of monsters once you approach the end of the main story and the difficulty starts to ramp up. You see, as well as being able to harvest the body parts of monsters, you can also harvest monsties – that’s right, your faithful companions – for their genetic material. Want your speedy pet Tigrex to have a technical attack in its arsenal? Just steal your Blue Yian Kut-Ku’s Blazeball skill.

A monstie’s best abilities are only unlocked at higher levels, so there’s a constant background grind where you’re cycling monsties in and out of your party in order to bolster your core pets with new and upgraded skills. It does feel a bit evil, but somehow this only adds to the charm of Stories 2.

Those genetic improvements can go a long way in Stories 2’s turn-based battle system. Core attacks come in three flavours: power, speed, and technical. There’s a rock-paper-scissors interaction between these attack types in which power counters technical, speed counters power, and technical counters speed, and winning duels is all about anticipating a monster’s attack and countering it. 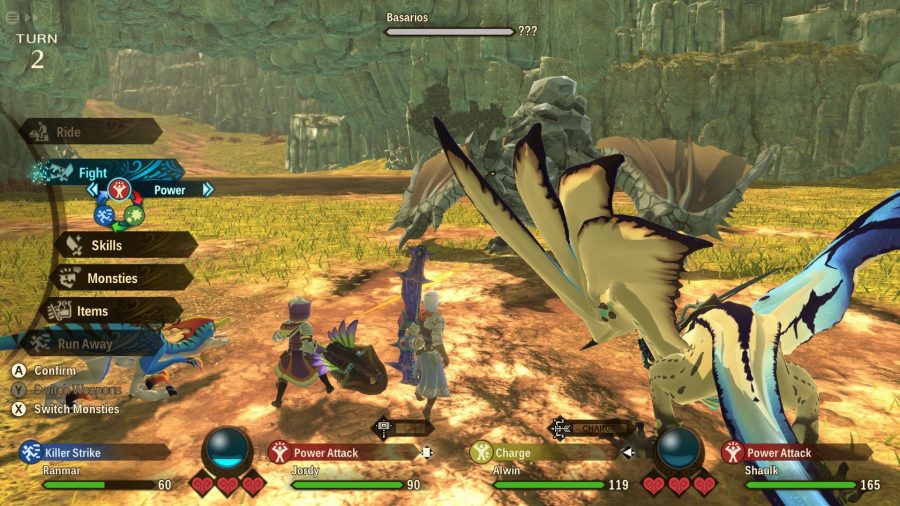 Like in the main series, each monster also has different body parts that you can target, both to improve the loot you get at the end of the fight, but also to deal critical damage and limit its armaments. Compounding things, there are three different weapon types (slash, pierce, and blunt), and to deal maximum damage to a body part you’ll need to make sure you’re using the right tool for the job. With well over 80 monsters in the game there are a lot of different patterns and weapon combinations to memorise.

This serves as the foundation of combat in Stories 2, but there are a ton of other mechanics that keep fights interesting and challenging right up to the final boss. Elemental damage becomes really important later in the game; items like throwable bombs help force enemies out of certain states; and you can build up kinship with your monstie to unleash an ultimate attack every few turns. It’s a simple but robust battle system.

Fights do occasionally outstay their welcome, and Capcom has built in a few time-saving mechanics, such as a button that speeds up animations, to help mitigate this. Going up against a monster you’re familiar with feels a little too formulaic as you counter their attacks perfectly, waiting for their health bar to hit zero, which can take a couple of minutes. As soon as you figure a monster’s pattern out there’s very little joy to be found in repeating the battle. 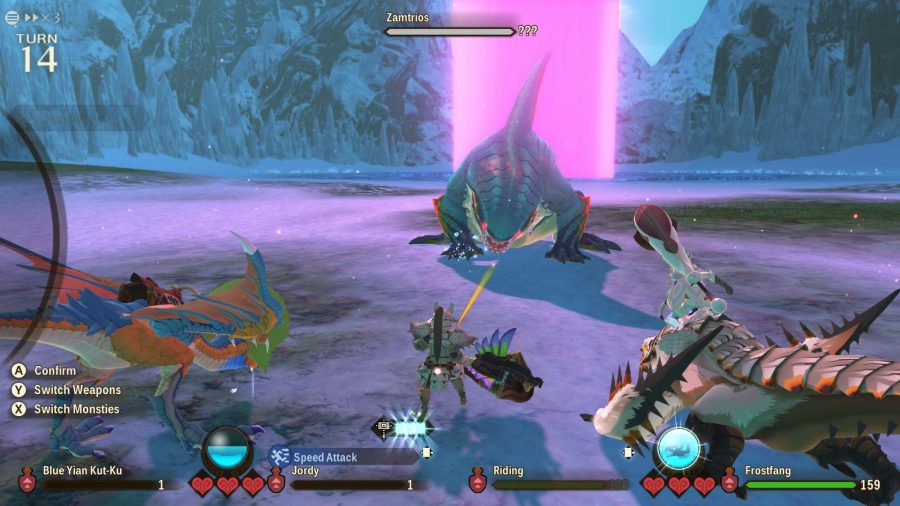 A typical fight against a speedy monster might play out like this. Four power attacks to the tail. Switch to hammer, two more power attacks until it’s enraged. Speed attacks until it’s calmed down, pausing every couple of turns to heal the party. Switch back to power attacks to see out the rest of the battle. You can repeat patterns like that indefinitely against certain monsters, and while speeding animations up does expedite the process a little, having to manually switch weapons and monsties to finish the fight as efficiently as possible quickly becomes a chore.

Mercifully, there’s an option to auto-complete battles against monsters that are significantly weaker than you, which is great when returning to early areas to grind out a few spare monster parts. For the most part, these frustrations only creep in at the tail end of lengthy sessions, and when I was only dipping in and out of Stories 2 for a couple of hours at a time I didn’t think to speed up the animations or avoid battles. Ideally, I’d never skip a beat, because whether I’m pulling off one of the cinematic kinship ultimates or ordering my Anjanath to unleash a volley of fire, there is a glut of superb animations to enjoy during combat.

The excellent animation work is also present during narrative cutscenes, which make up a significant portion of Stories 2. The narrative is certainly woolly, but its message of coexistence and empathy is told with boundless sincerity and charm. 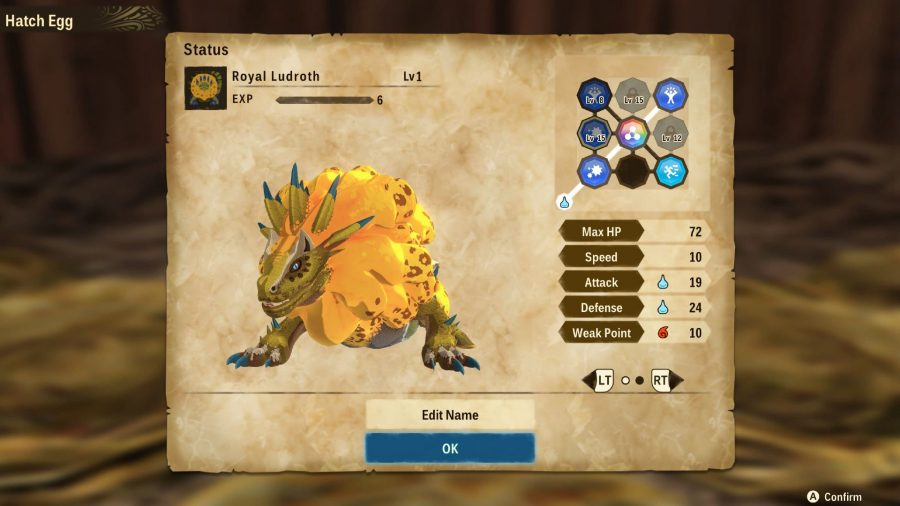 This is a narrative brimming with warmth and do-gooders, and now more than ever that’s exactly what some of us need. Some worn-out character tropes make the plot particularly predictable – it wouldn’t be a monster-battling RPG without an edgy rival showing up to halt your progress – but it barely registers as an eye roll. This is a story to be enjoyed while wearing pyjamas, sitting in front of the TV and slurping cereal as the sun threatens to break through the curtains.

At the start of the game you, a rookie rider, are entrusted with investigating a natural phenomenon that enrages monsters wherever it occurs. That plot takes you all over the world, from Polynesian-inspired coastal settlements and snow-capped mountains, to volcanoes and desert-based hunter cities. Stories 2’s vibrant colour palette ensures that every environment is a joy to explore, even if the act of doing so is relatively plain – there are some hidden areas you can access with specific monsties, but that’s about it.

Provided you don’t try and rush through any of its areas, Monster Hunter Stories 2 delivers exactly the right kind of grind over its roughly 40-hour playtime. As soon as frustrations over repeated monster battles start to creep in you find yourself up against a new threat to overcome. There’s always something new to craft or upgrade, or fresh monsties to level up, train, or, well, harvest. I’ve struggled to get into Monster Hunter games in the past, but Stories 2 has won me over. Now let’s have that Rise PC version, please. 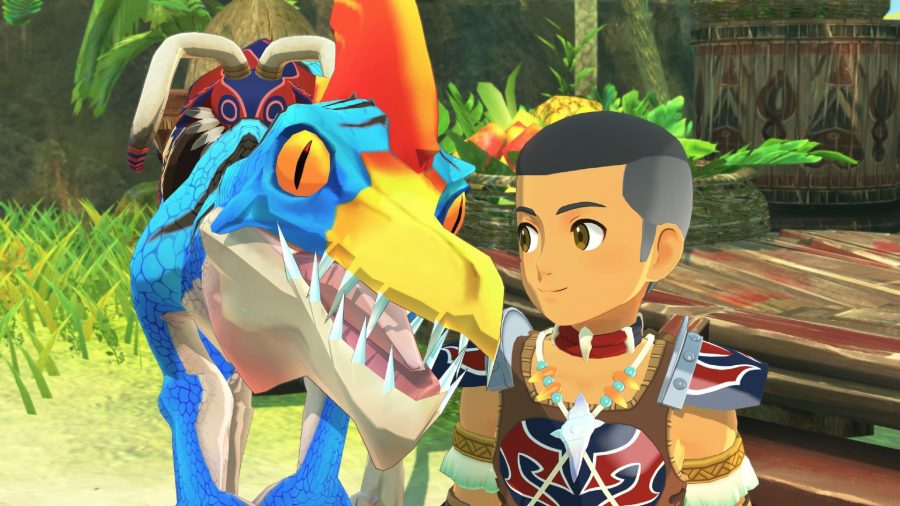 If you’re not a fan of overly earnest cartoons then Monster Hunter Stories 2’s exuberance – and occasional cringiness – may grate on your nerves like nails on a chalkboard. I love those things, so it’s perhaps unsurprising that I’m enjoying my stint as a rookie rider. With plenty more monsties to mutate, and no shortage of body parts that need forging into glamorous new accessories and weapons, I’m not quite finished with the grind either.

If this all sounds like your cup of the proverbial then you can buy Monster Hunter Stories 2 here. We’ve also got reviews for Monster Hunter: World and its expansion, Monster Hunter World: Iceborne, in case you see yourself as more of a hunter.

While the repetitiveness of its turn-based battle system can become frustrating, Monster Hunter Stories 2 is more than a novel twist on the main series' core components.