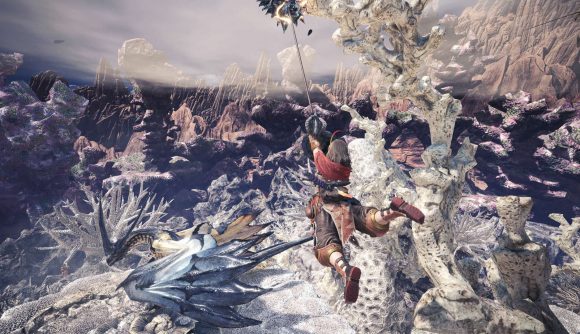 After playing a preview of the game at E3, Destructoid reports that in the Iceborne expansion you’ll be able to ride smaller creatures to go wherever you want. Using a special tool, you can jump right onto the back of a wee beastie and ride them. You’ll also be able to set waypoints on your map to help you navigate Iceborne’s frozen winterscape.

Knowing that Monster Hunter World: Icborne’s cold climate saps your character’s health, this is a welcome addition to the series. Also knowing that the map in Iceborne will rival the size of the original game just makes my virtual feet sore thinking about it, so having a beast buddy to take the weight off the journey sounds great. Capcom has also revealed a handful of new weapons for players to get their hands on – the Long Sword, Great Sword, and the Clutch Claw, which is essentially a giant grappling hook.

Check out the trailer for Monster Hunter: World Iceborne trailer below:

Iceborn will launch on console in September, but unfortunately, a PC release date has not been announced yet for Monster Hunter: World Iceborne. We’re expecting the game to launch on the best of all platforms sometime in Winter 2019. You will, however, still need the Monster Hunter: World base game to play the expansion, and that will set you back some $40.

Want to know more about Monster Hunter: World Iceborne? Head over to our release date page covering all the latest details about the expansion.