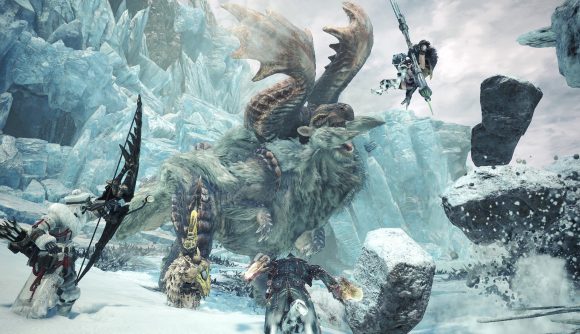 One of the few drawbacks of playing Monster Hunter: World on PC has always been that we’ve had to wait months for content that appears first on the console versions of the game. That lag is about to disappear, though: in April, the PC and console versions will sync up, with updates hitting all platforms at the same time.

The newly-updated Monster Hunter World: Iceborne title update roadmap lays out the next six months of planned content. The Grand Appreciation Festival begins on all platforms January 24, and that will include the usual slate of new limited-time quests, new cosmetics to earn, new layered armor sets and Palico outfits, and more. The festival runs through February 13.

PC players can expect Title Update 1 to arrive during the festival, on February 6. That will introduce the gorilla-like Rajang, which you’ll encounter on a quest in the new Volcanic Region in Iceborne’s endgame area, the Guiding Lands. That update will also arrive along with a limited-time Resident Evil crossover and the Lunar New Year-themed Holiday Joy fest, which hit consoles just a few weeks before the launch of Iceborne on PC.

You can see the full roadmap here:

Content will sync up on PS4, Xbox One & PC starting in April. pic.twitter.com/yYhk013yaP

In March, we’ll see Title Update 2, opening up the Tundra region in the Guiding Lands, which is the home of the Stygian Zinogre – a fanged wyvern that’s also known as the Hell Wolf. That update will also bring with it Safi’jiiva, the mature form of the giant baby dragon Xeno’jiiva encountered at the end of Monster: Hunter World’s campaign.

In April, PC players will see Title Update 3, and from that point on they’ll be current with the console versions of the game. That update will introduce Arch-Tempered and Master Rank versions of several monsters already in the game, plus another festival that spans both Astera and Seliana.

There’s more to look forward to after that, too. A fan-favourite monster will make its return in May, and more new monsters and updates are planned for June and beyond.

While we’re talking about big, flying beasts with big fangs, have a look at our list of the best dragon games on PC.