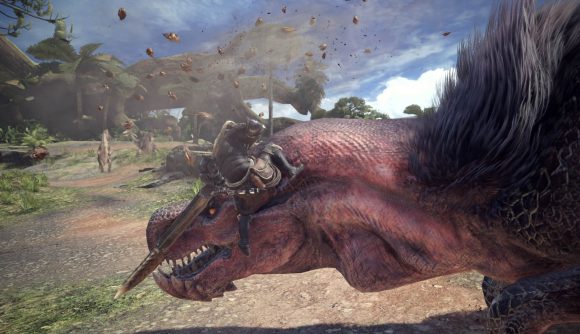 Monster Hunter World: Iceborne launches (at least on consoles) in just a few months, but there’s still a lot we don’t know about the expansion. A new interview gives us a few more basic details on what to expect, including the basic structure of the new story and how it fits in with what’s already in the original game.

If you haven’t already finished the MHW story, you’ll need to take care of that before the Iceborne release date. “Right when you download Iceborne you can start playing with the new mechanics added to the game,” producer Ryozo Tsujimoto tells Game Informer in a rapid-fire Q&A. “But for the story you have to finish Monster Hunter World first.”

While the big addition in Iceborne is a new, icy continent, the developers say that “maybe half” of the new story’s content takes place in the locations of the original game. However, there will be plenty of new stuff in those old areas when Iceborne hits – the developers just aren’t being specific about what that new story stuff is just yet.

If you’re not playing Iceborne, you’ll still be able to group up with players who have bought the expansion, so no worries about losing your co-op buddies to the new content.

While you’ll still see plenty of post-launch title updates, don’t expect another massive expansion anytime soon. Tsujimoto says that “Iceborne basically completes World, so it will be the last expansion.”

We’re still going to have to wait for the PC release, though here the developers reiterate their plans for quicker computer conversions. “Our thinking this time around is we want to make the console versions as solid as possible first,” Tsujumoto says. “But of course this time we’re making an effort to release the PC version earlier than before.”