The benefits offered by introducing a grappling hook to a videogame are well documented. A little extra vertical freedom goes a long way, as exhibited in everything from the Assassin’s Creed series to Terraria, and there’s no more satisfying expression of that freedom than firing a bolt through the air and hurtling along after it.

It’s a philosophy that Capcom seems to have adopted for the upcoming release of Monster Hunter World: Iceborne. The new expansion takes you to an undiscovered part of the new world, where you’ll meet new monsters and grind your way towards plenty more gear. But the most exciting thing that Iceborne has to offer is the Clutch Claw.

The Clutch Claw is a mean-looking assortment of spikes on a retracting cable, which acts as a combat specific grappling hook. Using it in battle allows you to fire a shot at a monster and then leap through the air, attaching yourself to your prey’s flank. It’s a simple concept, but it quickly becomes clear that getting to grips with the new weapon will test even seasoned Monster Hunters.

Once you’re attached to your quarry, you have three major options. Take advantage of your newfound proximity to get in a sneaky attack and you’ll hack a chunk from whatever monster you’re battling, before leaping free and pulling off a badass tumble as you land in the deep snow of Iceborne’s frosty canyons.

If you fancy something even more flashy, however, there are also some more complicated manoeuvres. Flinch Shot lets you send the beast you’ve stuck to charging forward, and careful positioning can see them rampaging into a wall or over a ledge, opening them up to a flurry of attacks. Get your timing exactly right, and you can change the direction of an incoming attack, sending the monster hurtling away from your teammates. 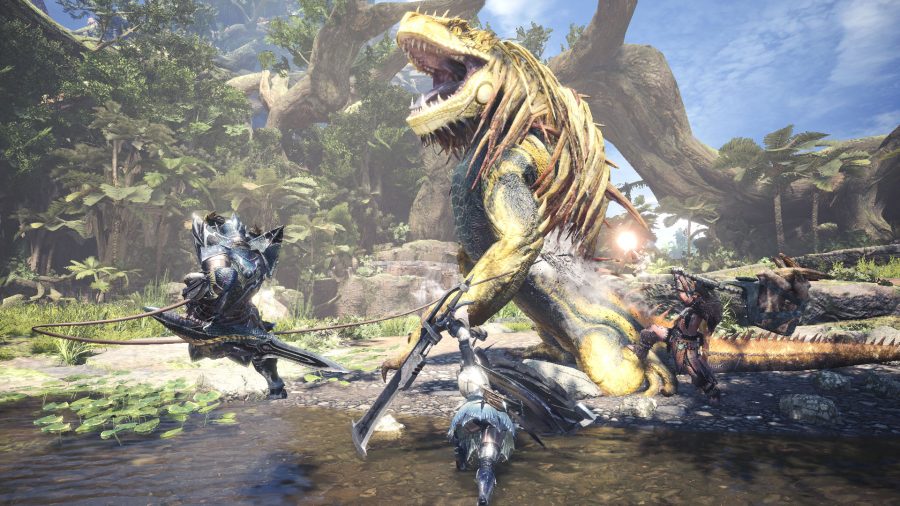 But the Clutch Claw isn’t just a means to get in a couple of cheap hits. Holding onto a moving monster uses up a lot of stamina, and the biting cold of Hoarfrost Reach will sap your strength even quicker if you’re not prepared, so you need to know exactly what you want to do before you commit to an attack. What’s more, it’s far from a catch-all solution – an enraged or attacking monster will quickly throw you off, so you’ll need to stagger it to make the most of the window of opportunity that the Claw offers.

The Claw’s limited range means that it won’t let you go soaring across the map like a New World version of Just Cause’s Rico Rodriguez. But it opens up a host of different options that will add an extra level of mastery to the game, even in fights against monsters you’ve vanquished many times before.