Struggling to know what Monster Hunter World armor to forge and wear in the Iceborne expansion? Our handy guide will outline the very best MHW armor sets that you should consider crafting.

Capcom’s Monster Hunter World: Iceborne expansion has brought with it plenty of shiny new weapons, deadly monsters, breathtakingly beautiful environments, and plenty of stylish armor sets. In fact, there is so much new content that it can be a little daunting to know what weapons and armors you should craft with your prized monster pelts. Iceborne’s Master Rank armor sets offer plenty of fashionable options and useful skills for every hunter, so you’ll want to experiment with the pieces from each of the full sets below when creating your own endgame combinations.

While building these armor sets won’t instantly transform you into an ace hunter, they will give you the tools needed to keep Capcom’s toothy terrors at bay. In order to help you cut down your kill times and increase your hunter’s chances of survival, we’ve picked seven of the best Monster Hunter armor sets in the game, chosen for their base stats, late-game potential, mixed set synergy, and bonus skills. 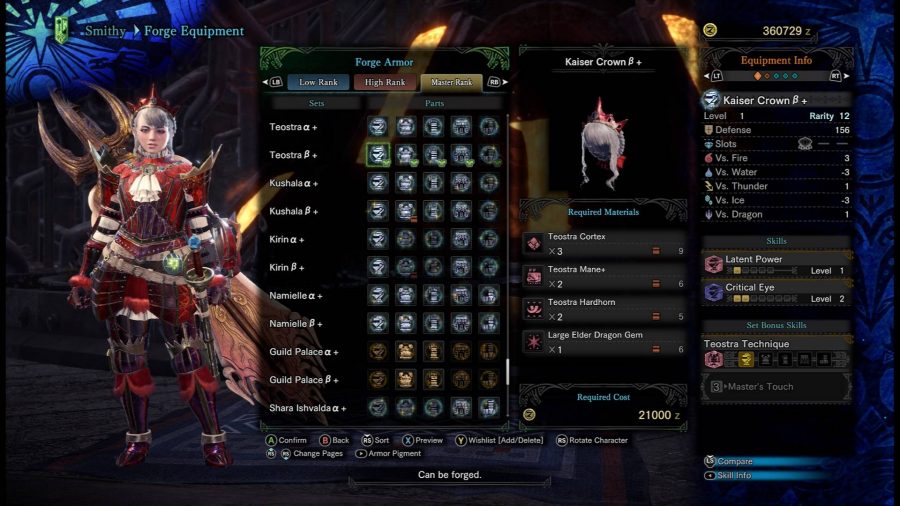 If you like the idea of landing a constant flurry of critical hits and drastically heightening your weapon’s overall damage output, then you’ll want to prioritise building armor pieces from the Teostra Beta + tree. By wearing three pieces of this fearsome Elder Dragon’s hide, you’ll gain access to Master’s Touch – a game-changing armor skill that prevents your weapon from losing sharpness during critical hits, making it incredibly effective when paired with skills that raise your weapon’s critical hit chance.

This set boasts superb synergy with fast-hitting weapons like the Long Sword and Dual Blades, so we suggest mixing the Kaiser Crown, Kaiser Vambraces B and Kaiser Coil B with the ever-popular Garuga Greaves B and Rex Roar Mail B. Not only will these additions give you extra points in Critical Eye and Weakness Exploit, they’ll also drastically raise your weapon’s damage. 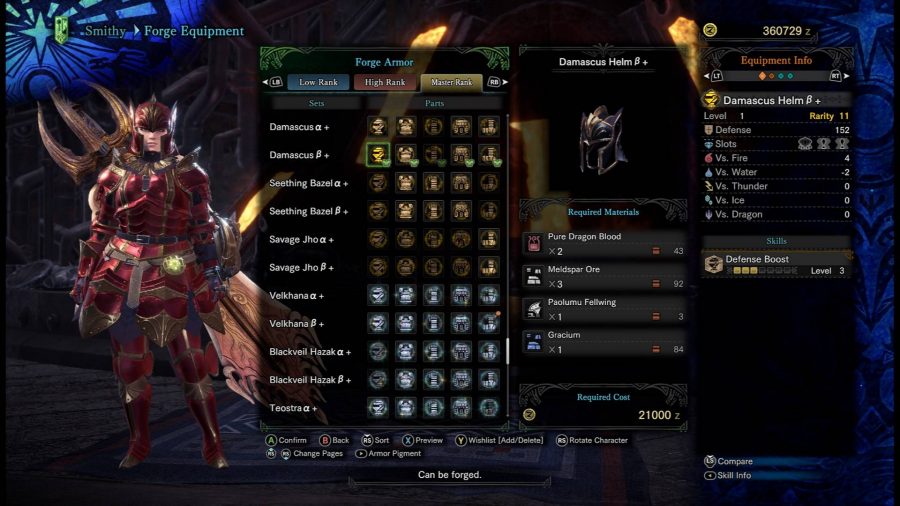 Despite not having any bonus skills, Damascus has always been at the forefront of the Monster Hunter armor meta. Whether you’re a savvy Great Sword user who’s looking to decrease the charge times of your True Charge Slash or humble Hammer bro looking to raise the sharpness of your favourite mallet, you’ll want to add a few pieces from this armor set to your shopping list. After all, charging up a colossal hit for it only to bounce off a monster’s plated hide isn’t just incredibly frustrating, it’s also incredibly dangerous as it gives the monster time to counter.

Fortunately, the Damascus Beta + set can be built during the early stages of the game, so there’s no need to pack up your oversized sword just yet. Both the Damascus chest and coil serve as excellent additions to late-game sets, giving you a total of three points in Focus (increases gauge fill rate/reduces charge times) and a whopping five decoration slots. Pair that with the added Handicraft from the vambraces and you have a recipe for a great mixed MHW armor set. 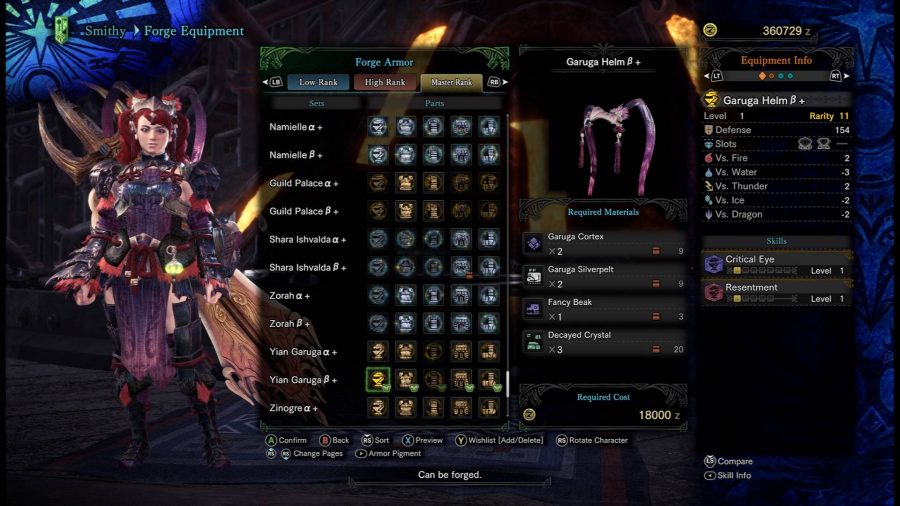 If you’ve been teaming up with other hunters in order to tackle Iceborne’s most fearsome wyverns, then you’ll likely have seen your fair share of mixed sets involving the Garguaga Greaves B +. The Yian Garuga set may not offer that many skills, but that doesn’t matter when you consider how potent Critical Eye is. The increased critical chance from this skill makes it a staple choice for any ranged and melee-based set, especially when paired with armor pieces from Teostra, Kushala, Damascus, and Fulgur.

While you won’t come across Yian Garuga until you unlock the Guiding Lands, we do suggest that you use this Bird Wyvern’s insanely powerful armor pieces when crafting the ultimate endgame set. 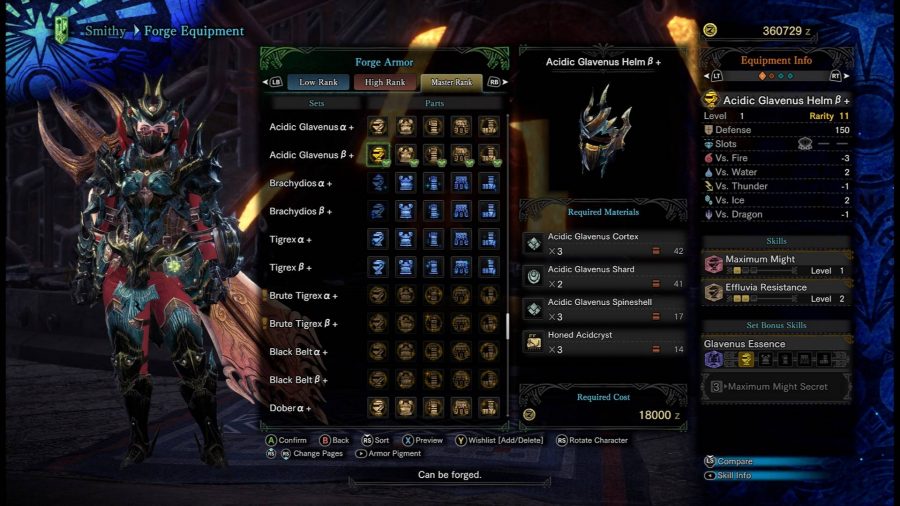 Acidic Glavenus’ weapons are some of the most powerful in the game, but their lack of sharpness does make them rather unwieldy. Fortunately, this sword-loving dinosaur’s armor offers three points in Handicraft, giving hunters the opportunity to extend their weapon’s sharpness gauge. While the Handicraft Charm IV will fix the dull edge of most weapons, it’s tied to late-game materials from the Guiding Lands, so consider using either the chest or coil if you lack the elusive Handicraft decorations.

Those of you struggling to survive against Blackveil Vaal Hazak’s toxic fumes will also find a use for the set’s Effluvia Resistance skill, which greatly reduces Effluvial Buildup. The set bonus (Maximum Might Secret) also increases affinity as long as stamina is kept full for a period of time, making it a great armor option for weapons that don’t rely on high amounts of mobility. 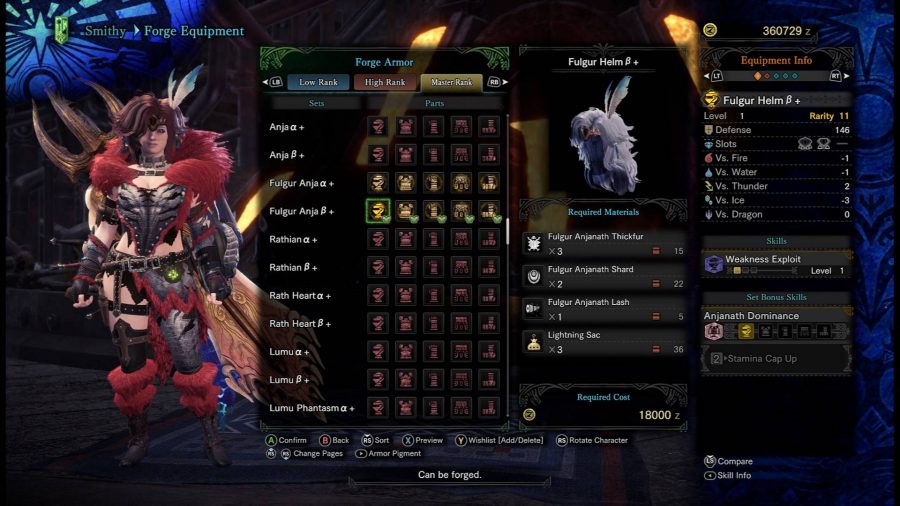 Capitalising on a Wyvern’s weak points has always been beneficial in the Monster Hunter series, but with the introduction of the Clutch Claw, it’s never been this vital. In fact, if you’re not constantly softening key parts, then you’ll find your kill times will be longer and your ability to break certain body parts will become that much tougher.

The Fulgur Anja beta set can be crafted fairly early on and gives you access to Weakness Exploit, a skill which increases the affinity of attacks that exploit a monster’s weak spot. The Item Prolonger skill is also the cherry on the cake as consumables like Demon Powder, Hardshell Powder, Hot Drinks, and Cool Drinks last that bit longer. Even if you don’t wish to wear the full armor set, be sure to craft the helm as it’s used in many endgame mixed sets. 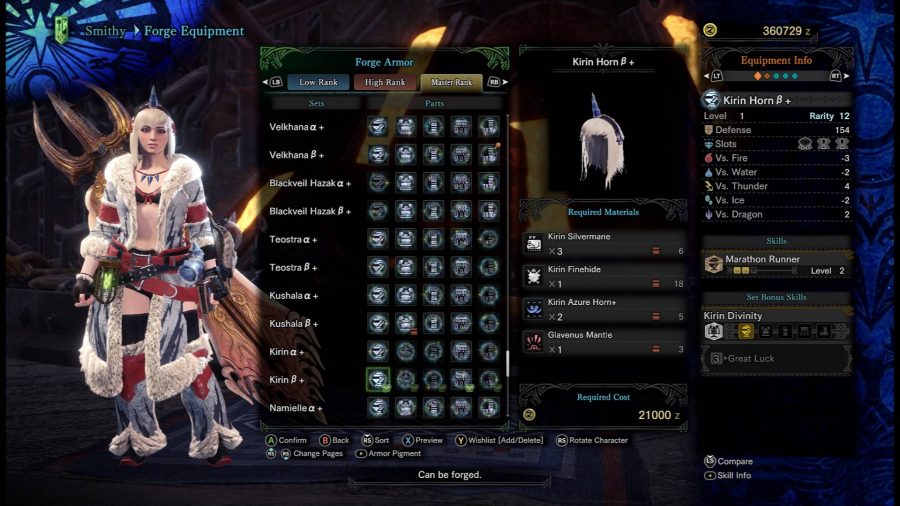 Are you tired of trying to obtain the ever-elusive monster mantles and rubies? Do you want to increase the number of materials you obtain for successfully completing a quest? If the answer is yes, then look no further. Kirin’s set bonus comes packed with Great Luck, meaning you’ll constantly be showered with monster materials upon every successful hunt. This skill alone makes it the perfect addition to every hunter’s wardrobe, especially if you wish to keep the dreaded desire sensor at bay.

To make matters even better, the full set offers both Critical Eye x2 and Free Elem/Ammo Up. However, if you don’t wish to craft the entire set and still want a decent Heavy Bowgun armor mix, then we suggest utilising the Kirin Jacket B + alongside the Fulgur Helm, Artian Vambraces, Shara Ishvalda Coil, and Yian Garuga Greaves. 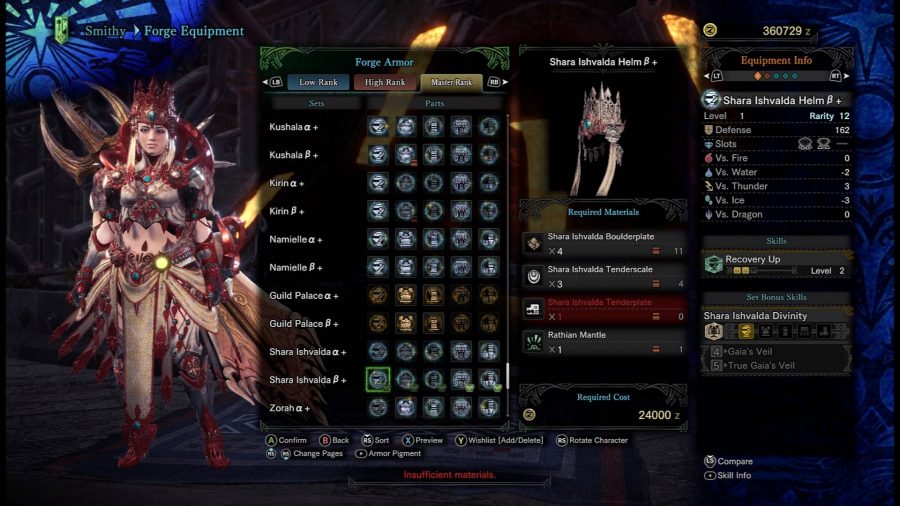 Monster Hunter World: Iceborne’s terrifying final boss is a true test of your hunting prowess, but if you manage to slay this bloodthirsty behemoth, you’ll be able to craft some of the best gear in the game. Shara Ishvalda’s armor set has some pretty decent skills and while you’ll want to mix and match certain pieces, it’s still worth crafting and adding to your collection. The interesting thing about the Shara Ishvalda armor is a lot of extra skills activate whenever you wear any of the game’s mantles. Every one of these mantle-activated skills is tailored around negating any elements that would otherwise stop your attacks, giving you the chance to unleash your most powerful moves without interruption.

The base armor skills also give you a lot of survivability, which is something you’ll be thankful for when facing Iceborne’s tempered monsters. If that wasn’t enough, offensive skills like Critical Boost and Partbreaker are also present, making it a great set for those who want to slice off monster parts with deadly crits.