Capcom’s beastie-bashing adventure may be horribly late to the PC party, but we’ll forgive it. After all, we just can’t stay mad at Paolumu – aka The Flying Hamster of Death.

Still, coming a full six months after the console versions, you’d hope Monster Hunter World isn’t a phoned-in port. Has the game received any major graphical upgrades over the PS4 and Xbox One editions? Are 60fps Barroth brawls easily obtainable? That’s what we’re here to find out, hunters.

In this PC performance review we’re rolling out the big guns: we’ll be using a 4K-capable, high-end PC  fitted with a Nvidia GTX 1080 TI graphics card. It’s also packing an i7 8700k CPU, since World is going to be extra demanding on your CPU. So let’s get this frame-counting, Anjanath-finishing show started.

Monster Hunter World’s graphics settings can be found in the display tab of the options menu. From here, you can tweak your resolution, decide whether to cap your framerate at 30 or 60fps, and select between the game’s four main presets, which range from low, mid, high, to highest. 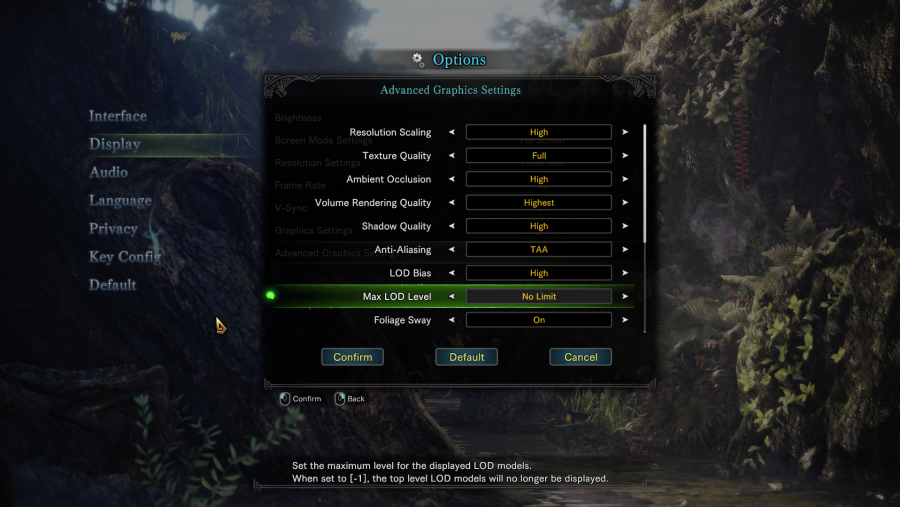 Annoyingly, you can only swap between presets from the main menu before you fire up your save, meaning you have to quit the game every time you want to fiddle with graphics options. Worse, changing resolution kicks you from the game entirely, requiring a hard reset back to the desktop before the new res is applied. Suffice to say, World doesn’t exactly lend itself to instant, on-the-fly tweaking.

For this tech review we've rolled out the big guns: a PC built for top-end 4K performance. It should, in theory, eat Monster Hunter: World for breakfast akin to a hungry Great Jagras.

In terms of individual options, Monster Hunter World packs in a decent variety of tweakable settings. Ambient occlusion, LOD levels, subsurface scattering, dynamic range, foliage sway, and two types of anti-aliasing (either FXAA or TAA) can also be fiddled with. Helpfully, the game also provides a simple explanation of what each feature does, while also giving you a rough estimate of its performance cost.

It’s also pleasing to see you can uncap World’s framerate, though the fact switching the game to 21:9 adds unsightly black bars will aggravate the UltraWide crowd. Resolution scaling can also be switched on to prioritise either visual quality or framerate, though choosing the latter for more fps can leave the game looking uglier than a Bazelgeuse’s backside. 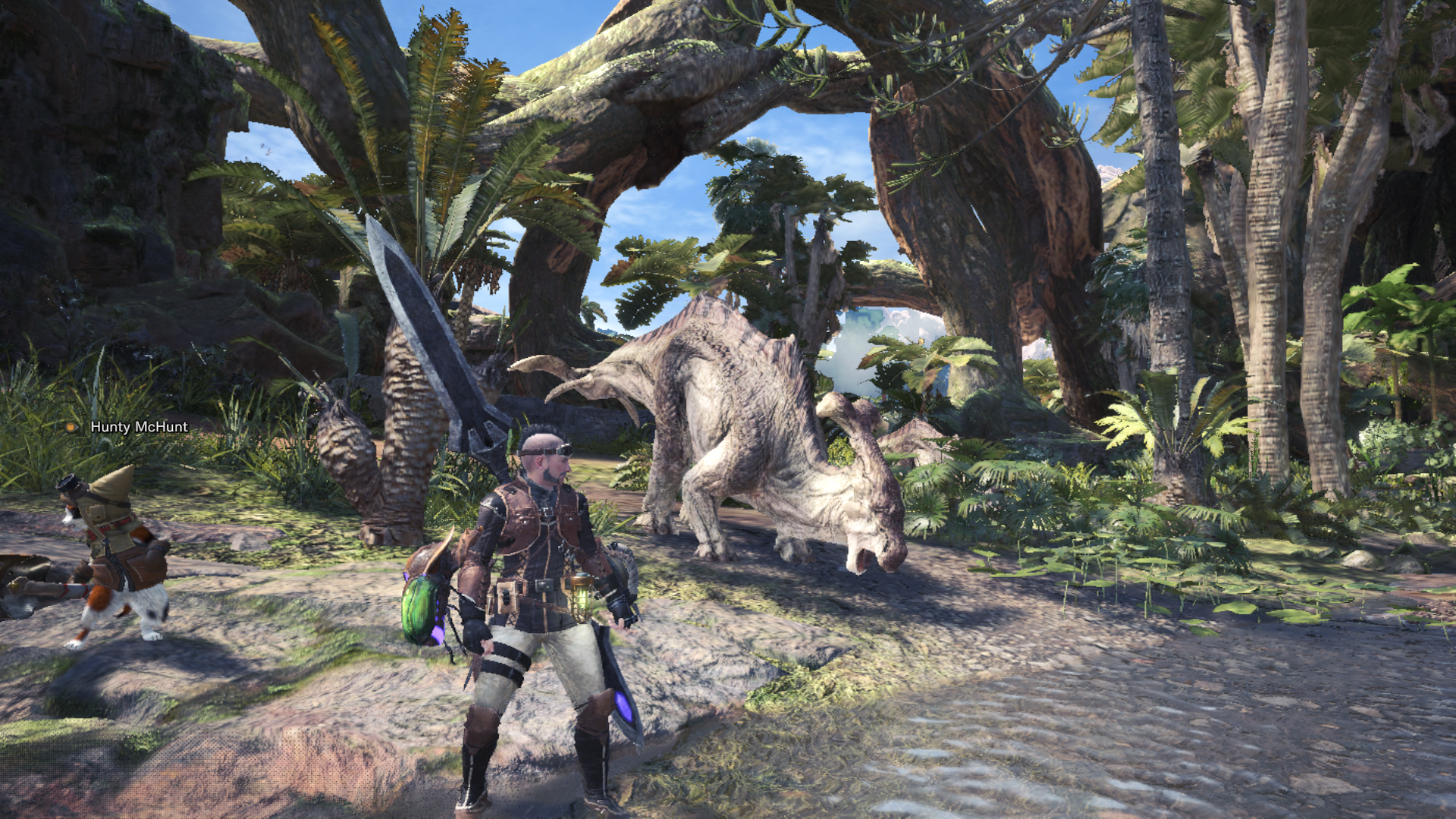 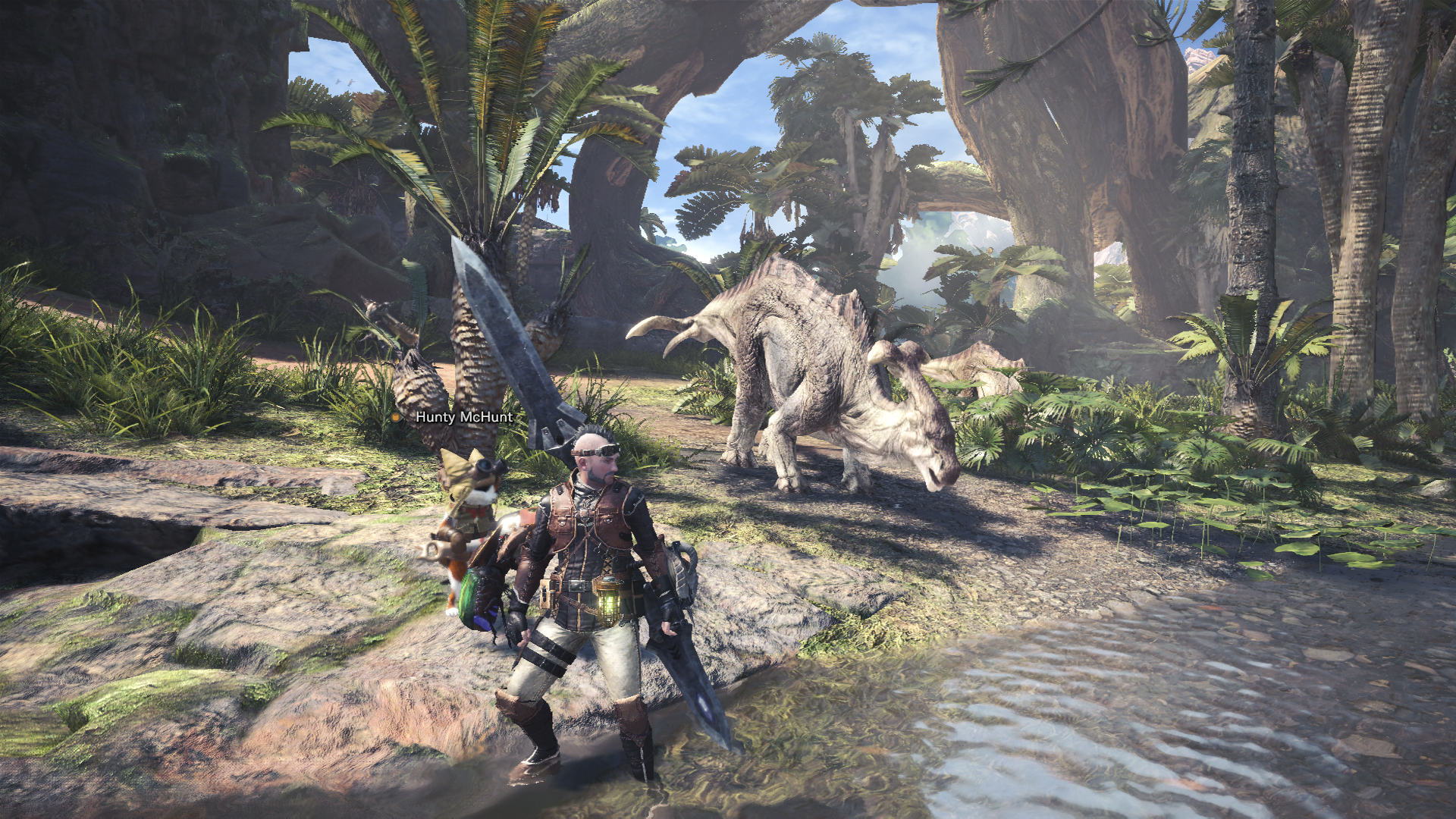 For our graphics analysis, we compare similar screenshots taken on the four standard presets of highest, high, mid, and low. Irritatingly, you need to exit out to the main menu to switch between them. Hang your head, Capcom. 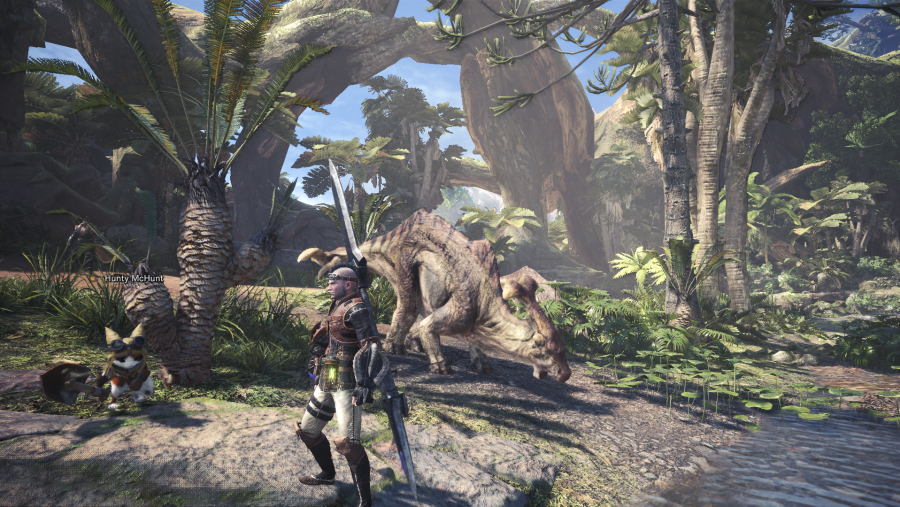 Monster Hunter World may not be a technical knockout, but thanks to its thoroughly disarming art style and expressive animation, it’s often downright eye-arousing in motion. The designs of the game’s headline beasts is often astonishing, and its different worlds, like the Ancient Forest, Coral Highlands and Wildspire Waste, are both geographically complex and visually varied.

At the highest preset, World is a looker. With everything whacked up, the Ancient Forest looks lush and verdant, with ambient occlusion giving this sweltering battleground real depth. It’s a little fuzzy, mind. Neither of the game’s two AA solutions are that impressive, and whether you go for FXAA or TAA, World and its behemoths look blurrier than they should.

Played at 1080p with the framerate uncapped, our benchmarking tools report an average of 110fps on highest, with a low of (a still hella lofty) 78fps. This is the GTX 1080 TI, after all. While 1920×1080 doesn’t make our rig sweat even a smidge, cranking the action up to 4K can hobble even Team Green’s mightiest card, as we’ll find out shortly. 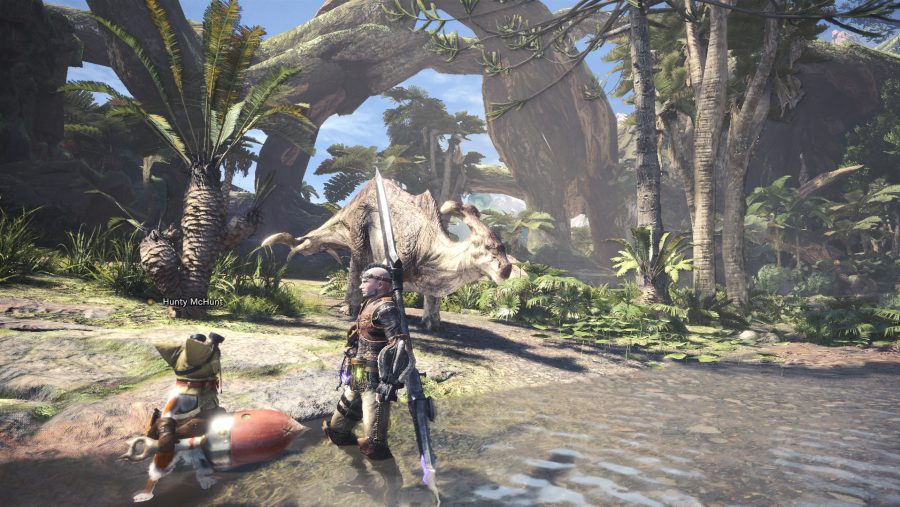 At first glance, there’s not much to separate this preset from its bigger brother. World still looks impressively detailed at high settings, and its only when you compare side-by-side screenshots that differences really begin to emerge. Dropping down from highest, shadows are paired back a tad, giving the game a flatter look. Ground textures also appear a little less detailed, though the level of background foliage in the environment seems to remain the same.

Performance-wise, the 1080 TI continues to slay the game, with Fraps posting an average of 159fps, with a low of a (frankly silly) 130fps. If you’re playing on a mid-range card, the visual differences between highest and high are slim enough that you should opt for the former if you’re trying to claw back frames. 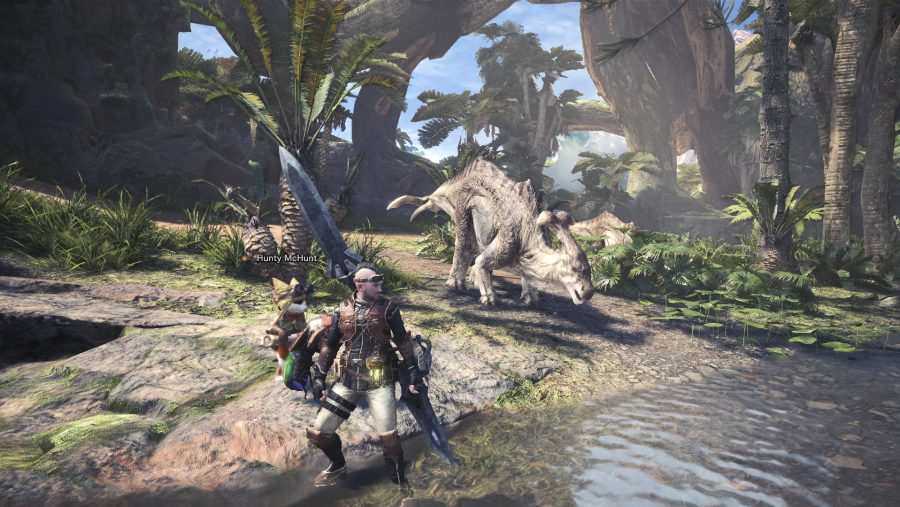 At the mid preset, World still looks impressively detailed, texture quality is the same as on high, and TAA anti-aliasing and foliage sway remain. Ambient occlusion does drop a notch though, and anisotropic filtering is also toned down, leading to sparser, less convincing shadow coverage. Considering World proves so demanding at resolutions above 1080p, this preset offers the best balance between visual fidelity and performance if you’re looking to run the game at either 1440p or 4K.

At 1080p, mid settings obviously don’t tax the 1080 TI, with our benchmarking tool reporting an average of 168fps, with a minimum of 143fps. With a decent GPU and CPU combo, performance gains from selecting the mid preset over high are going to be relatively minor if you’re playing at 1080p. 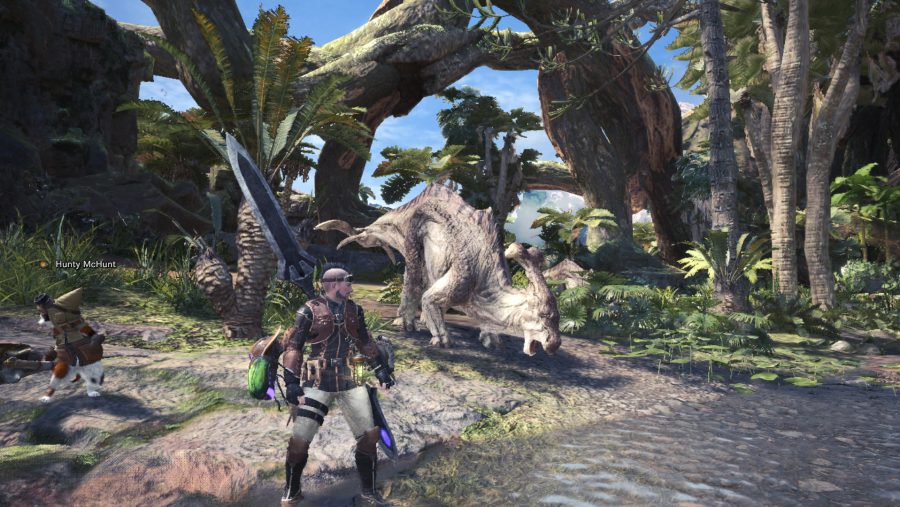 We know you should never judge a book by it cover, but dear lord has Monster Hunter World’s dust jacket ever taken one hell of a beating on low. The fugliest preset switches off nearly every visual bell and whistle, with ambient occlusion, screen space reflections, and foliage sway all given the heave-ho.

Texture quality is also halved from the mid preset, and AA done away with altogether. Such compromises result in a jagged, distractingly rough picture, with the butchering of textures leading to monsters who looked like they’ve been forged from Play-Doh. By comparison, even the base PS4’s version of World runs rings around this ghastly preset.

At low, performance has all the impact on the GTX 1080 TI’s resources as Windows’ calculator app, with Fraps reporting an absurd high of 203fps, with an average of 186fps. For those looking to play World at 4K, this preset is also your only shot of locking down a completely consistent 2160p/60fps. 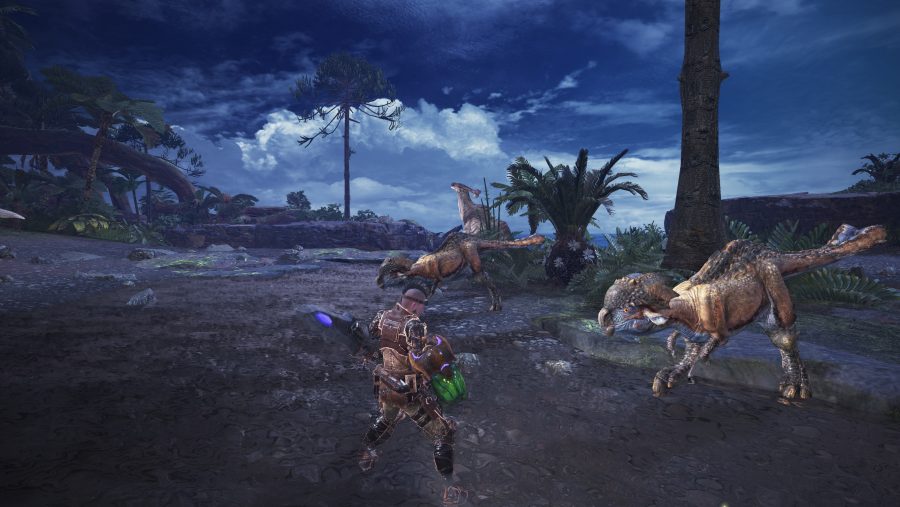 Whether it’s down to substandard optimisation or World monstering your CPU, Capcom’s beast hunt is hugely demanding at 4K. If you’re looking to play the game in Ultra HD at a reasonable framerate, serious hardware is required. Even on our 1080 TI powered rig, a consistently locked 4K/60fps is off the table, unless you switch to the low preset. At the game’s highest setting, 4K performance often drops to the high 30s (especially during cutscenes or fights involving multiple creatures).

If you’re looking for a good balance between visual quality and a respectable framerate, switching to the mid preset and turning off anti-aliasing should see you hover around the low 50s most of the time. At these settings, we measured an average of 57fps on our test machine, though drops to 53fps were quite common. World’s art design absolutely sings at 4K, but you might be best turning on the 30fps cap if you want the most stable performance possible. Turns out, Capcom’s latest really is a monster.

How to run Monster Hunter World at 60fps

If you’re suffering frame drops and don’t mind shadow detail taking a slight hit, you’d be wise to go for the high preset instead of highest. If you own a rig in i5 power bracket with a GPU card similar to the GTX 1060, you should be able to run the game at 60fps the majority of the time. If you’re desperate to have a completely locked 60fps, enabling variable resolution with the ‘prioritise performance framerate’ option should get you there.

Monster Hunter World is an acceptable PC port of a truly terrific game. Though the six month wait hasn’t been ideal, support for 60fps gameplay (and above) automatically makes the PC version the definitive edition. Capcom has also included a fairly generous suite of tweakable options, and fully mappable key bindings are also a nice inclusion – though you should absolutely play with a pad. Pity switching presets and resolutions is so annoyingly cumbersome.

Even at the highest settings, World doesn’t look markedly more detailed or impressive than the console versions, though at full-fat 4K, there’s no question it’s a good deal sharper than even the PS4 Pro and Xbox One X editions. Ultimately, this is an above average port of a game that’s often extraordinary.

While sporting a generous suite of graphical options, the PC version of Monster Hunter: World is an average, at times aggravating, console port.