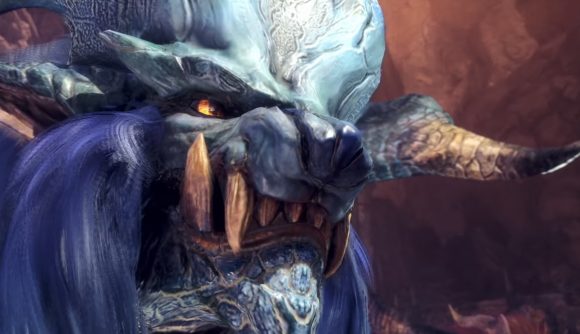 Monster Hunter: World PC players will finally have the chance to hunt Lunastra later this month, as the Steam version continues to catch up with the free content provided for the console versions of the game. The Elder Dragon will be available on November 21, and a host of other changes are in store soon – including connection error fixes and the option to turn off depth of field blur.

As Capcom describes, Lunastra is “a rare female Elder Dragon that litters the air with hot blue dust” that often travels alongside Teostra, her mate. You’ll need to reach HR 16 or higher to undertake the event via the Huntsman in Astera, and you’ll naturally be able to craft new weapons and armour from these materials. You can also grab the Temporal Mantle with this update, a garment that lets you automatically evade damage from big attacks.

This update goes live at 16:00 PST / 19:00 EST on November 21, or midnight GMT on November 22. This patch will also let you disable depth of field and vignette effects via the graphics options, and will add a preset function for key mapping. There’ll also be a new ‘default 2’ setting for 5-button mice.

On Friday, Capcom issued another update regarding Monster Hunter: World connection errors, and it seems there are another set of fixes incoming for these issues – though it’s worth noting that various fixes have been in the works for months, and nothing seems to have eliminated the problems entirely. We may get another patch before the Lunastra update aimed at further improvements, though.

Monster Hunter movie set photos also brought Capcom’s franchise into the news today, though that reveal turned out to be a bit less positive. Paul W.S. Anderson’s take on the series features a lot more military gear and modern weaponry than you might’ve expected.