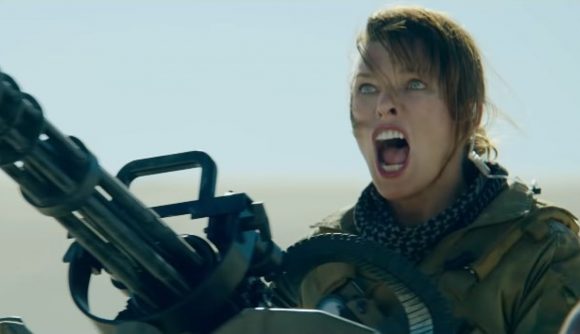 Given the year 2020’s been, we’re all a little worried about Christmas. Sony Pictures is aware of the concern, and has made the wise decision to put the Monster Hunter movie out on Christmas Day, so we have something to truly bring us all together in joy and good spirit.

IGN has confirmed the new release date for the movie based on the action-RPG games. Now, at least in the US, Monster Hunter will open in theaters and IMAX on December 25, moved up five days from the December 30 that was teased in the first trailer. Monster Hunter’s release date has bounced around quite a bit due to the pandemic, starting at September 4, then jumping to April 23, 2021, before coming back to December 30, and moving forward again to December 25.

The Paul W. S. Anderson-directed blockbuster will now be in direct competition with Wonder Woman 1984 and Disney’s Soul, both of which will be hitting streaming services the same day, the former HBO Max, the latter Disney Plus. If you’re in Germany, Austria, or the Netherlands, you’ll be able to catch Monster Hunter from December 3. Nothing on specific dates for UK and Ireland just yet, but we’ll keep you informed.

The Monster Hunter film continues Anderson ongoing collaboration with Milla Jovovich, who starred in all the Resident Evil live-action flicks. Jovovich is playing Captain Natalie Artmeis, whose military team gets stranded in the Monster Hunter dimension. She then pairs up with the in-universe hunter, played by Tony Jaa, to hunt monsters and fight a way home for her team. Ron Perlman, of Hellboy and Sons of Anarchy fame, will be in it as the Major, and Palicoes will play a prominent role.

At least there’ll be one worthwhile gift this Christmas – here’s the best adventure games, best survival games, and best multiplayer games to tide you over until then. Oh, and you might be interested in this best action movies list from our sister site, The Digital Fix.