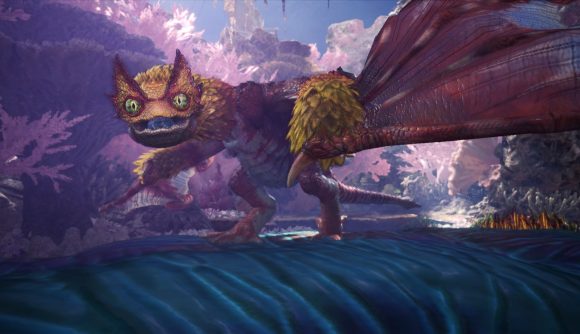 Monster Hunter World: Iceborne is finally out on PC, and while some of us are having a good time romping around in the snow of the Hoarfrost Reach, many players are experiencing new technical issues and performance problems since the expansion launched. Worse, these issues are affecting players who haven’t even purchased the DLC. The problems are widespread enough that Monster Hunter World: Iceborne now has a ‘Mostly Negative’ review score on Steam.

At the time of this writing, Iceborne had 3,256 Steam reviews, with only 39% of those marked as positive. Compare that to the base game’s ‘Very Positive’ rating across 107,743 Steam user reviews, and it’s a pretty grim picture.

Scrolling through the negative reviews, you see two major complaints pop up right away. First, many users say that Monster Hunter: World is now hitting 100% CPU usage on their machines, rendering the game unplayable, with even menus running at too low a framerate to use. The second big issue stems from some kind of save file incompatibility bug that wipes players’ progress – and we recommend manually backing up your Monster Hunter: World save now even if you don’t plan on buying Iceborne. An overwritten or corrupted Monster Hunter save file could mean the loss of hundreds of hours of progress.

Capcom seems to be aware that the PC version of Iceborne is causing major problems for some players. The company says it’s looking into the problems, and encourages players to share their issues and system information with Capcom Support.

[PC/Steam] We are aware of performance issues that have been reported, and are currently investigating them.

If you have been experiencing any issues with the PC version, please contact Capcom Support and be ready to share more info on your system: https://t.co/qf4EFm6HJK

There are a couple quick-fix workarounds that players are sharing that may help relieve some or all of the problems, depending on your system setup. I haven’t been able to test these, since my copy seems to be running fine, so I can’t vouch for their effectiveness.

Other players have reported that giving Monster Hunter: World high priority in Windows Task Manager has helped with the CPU load problem.

In any case, we hope Capcom can address the problems quickly.