There’s nothing quite so alluring as the prospect of interstellar travel, and of claiming one’s destiny among the stars. Moons of Ardan is a city-building game with depth that belies its casual, accessible presentation, blending both city builder and management game themes to make it something akin to Factorio in space.

You play a lost group of aliens known as the Axonauts, who’ve crash-landed on a planet out in the depths of space. Your long-term mission is to rebuild your civilisation and reconnect with your homeworld. To do that, you must build a network of production chains of ever-increasing complexity.

Your immediate job is just to meet the needs of your citizens, but after that, you’ll build the infrastructure necessary to explore the solar system in which you find yourself, before expanding and exploiting the resources of other planets as well. The demo features a rather small system of three planets, but excitingly it’s simulated in real time, much like Kerbal Space Program. Efficiency, strong logistics, and a bit of forward planning are the key skills that will propel you through more and more production chains, with the lure of getting out to space always tempting you into the long sessions that can pass in the blink of an eye in the best of this genre.

If there’s anything Moons of Ardan could work on in the short term, it’s perhaps accelerating the player’s progress through the earlier parts. 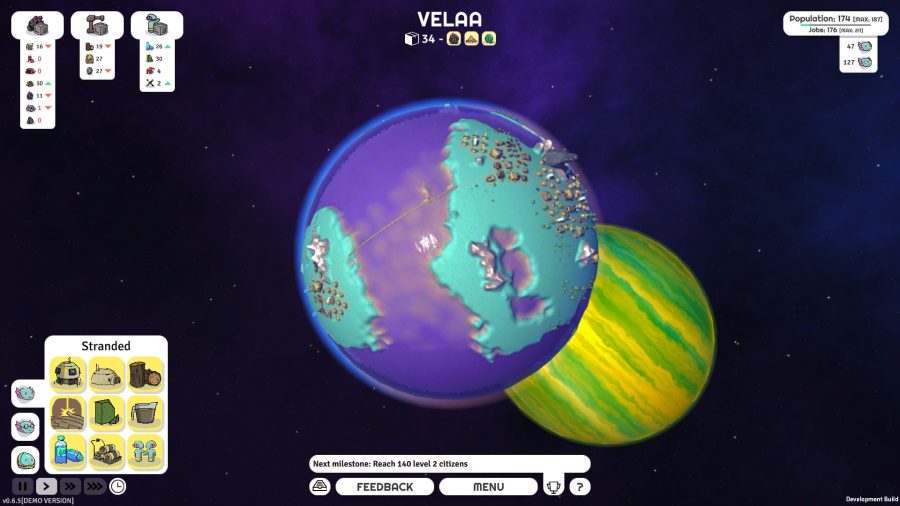 How much of this is down to the demo’s deliberate content gating to teach you the basics, and how much is by design, is unclear at the moment. But even with a brief stint during Steam’s Next Fest there are already some things worth mentioning.

MOONS OF ARDAN HAS THE SAME POTENTIAL, AND ALLURE, AS OTHER SIMILAR GAMES

Granted, at this stage there’s no sense in letting a player see everything there is to see too quickly, but the initial charm of Ardan does wear off when you stop building new supply chains and start building bigger ones. This is all because of the way the game handles its fundamental building block – population.

Much of what you’re able to do in Ardan depends upon expanding your population, which you do by meeting your people’s needs. A place to live is obviously a fundamental need, so you’ll build many houses. Houses have soft caps on how many Axonauts (people) they can hold, which you can raise by meeting more sophisticated needs, which depend upon ever more complex production chains, which require increasing amounts of raw materials at the initial stages. 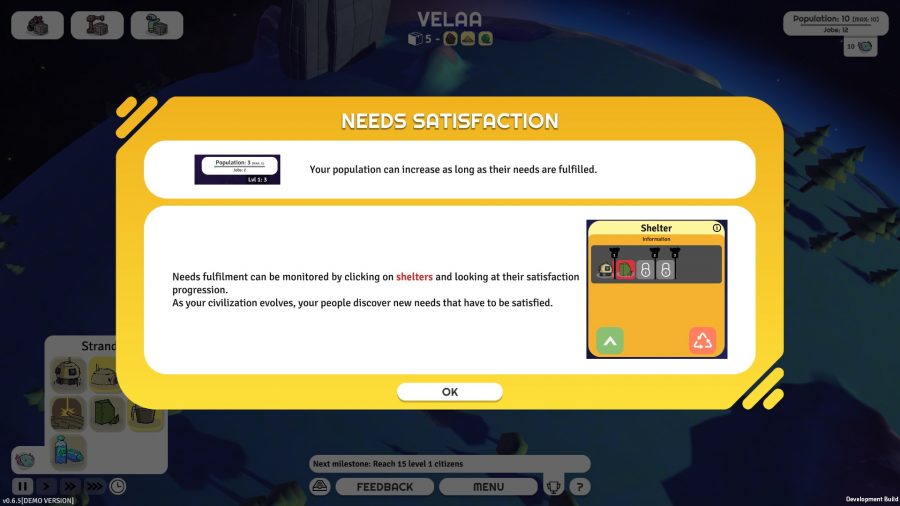 So as you expand your capabilities to meet these needs, you need to increase your population just to provide the workforce required, which puts increased pressure on all the lower-tiered needs which also need scaling up, and so on.

It’s a similar tension as exists at the core of production-focused city builders like Anno 1800, but it’s handled much less deftly here. In Anno, goods are distributed to particular neighbourhoods from markets, and their supply elapses gradually as it’s used up, causing fluctuations in supply and demand to unfurl gradually. By contrast, Moons of Ardan seems to take a binary approach to whether or not a need is being ‘met’ – you’re either meeting it for your entire populace, or you’re not.

Whether this is a consequence of stockpiles being global as well is unclear. You have to make sure that you have a decent distribution of warehouses to ensure the logistical underbelly of your society is functioning properly, but all resources are considered to be accessible from every hub. As a result, Moons of Ardan threatens to descend into a maddening self-perpetuating growth cycle which will probably all end in tears at some point, something that’s exacerbated by a simplistic design that focuses solely on population as both a gating mechanism and the primary source of tension. 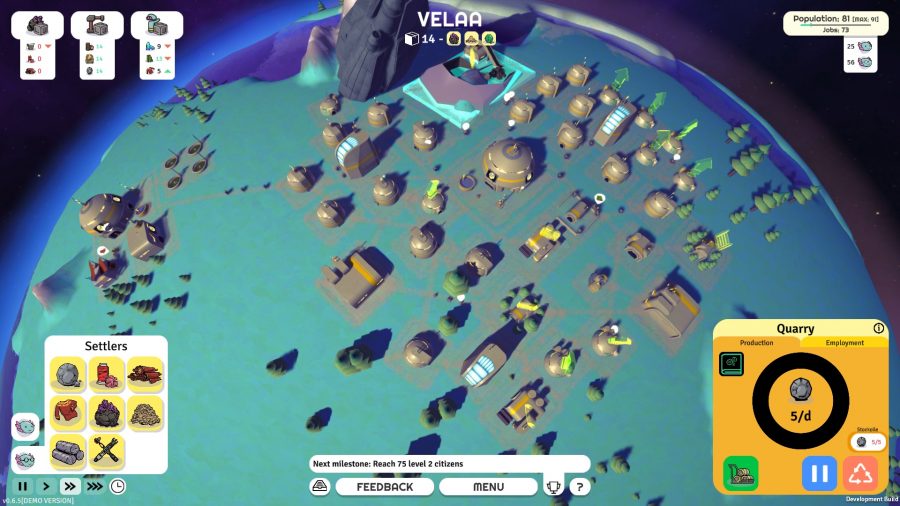 When you are considered to have ‘met’ a need, your past choices come back to haunt you. If there are a great many shelters where the next need is suddenly ‘met’, the population cap can absolutely explode. Axonauts are generated one at a time on a timer, but it doesn’t afford you much room to adapt or adjust, and it won’t be long until your population surges.

Again, this puts an enormous amount of pressure on not only your newly met need, but all of the preceding ones which had previously been in a state of happy balance. The way the game presents input/output could definitely do with some tweaking to help make things clearer as your society grows – it’s not always easy to tell if you’re actually running out of something or not.

But it speaks to the thought that’s gone into creating this game that I can say so much about what is essentially a small slice of an Early Access project. I see in Moons of Ardan the same potential, and the same allure, as in other management games like Factorio or Anno. It’s also able to give you the same sense of satisfaction when the plates are all spinning. 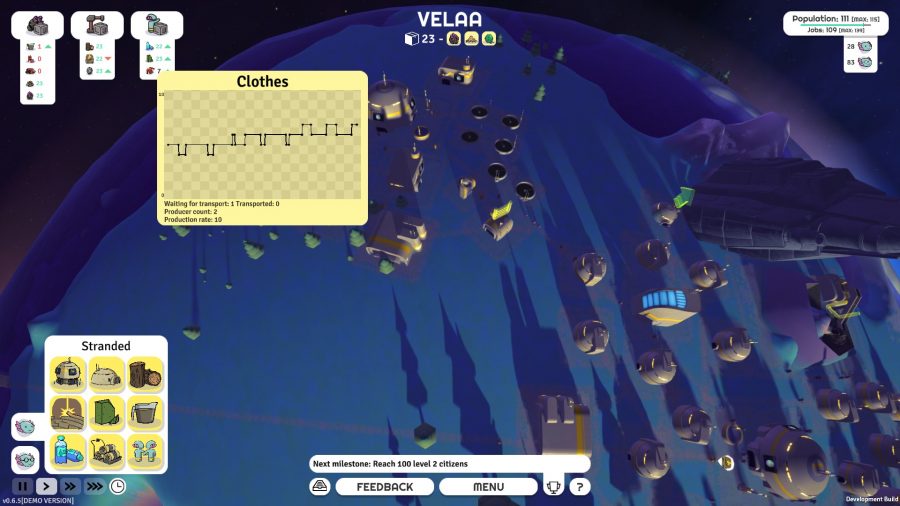 The road map mentions few things that are definite in terms of future development, but as long as the grind doesn’t get out of control and the payoff is worth the effort, this could definitely be one of the brighter stars in the night’s sky.

Moons of Ardan is available to play right now as part of Steam Next Fest, and will be launching into Steam Early Access on October 21, 2021.