Want to know what the best Mordhau weapons are? If you’re new to sword battlers like Chivalry then claiming a kill on the multiplayer battlefields of Mordhau is no mean feat. While you might be able to sneak up on an unsuspecting archer and club them to death with a maul without too much of a fight, you’ll likely find yourself dying time and time again to experienced knights packing formidable weapons like the zweihander, halberd, and war axe.

While there’s no substitute for raw skill in Mordhau, once you’ve mastered the basics of battle you can significantly up your game by making sure to bring the best Mordhau weapons along with you. There are more melee weapons than most people will have time to master, so knowing which tools are worth your time and gold will let you concentrate on the important stuff, like beheading hapless lute players.

Below we’ve laid out all the main weapons in the game (sorry, Peasants) in a tier list. We’ve not tailored this list to beginners either, so you may find that some of these Mordhau weapons are either level-locked, or tricky to get the hang of.

Eveningstar
Can kill with one blow to the head or two to the chest. Boasts decent range, can poke, and has a surprisingly swift attack speed.

Zweihander
This very long sword marries high damage and long reach. This is a great weapon for conservatively picking off foes in larger brawls.

Throwing knives
Not to be overlooked, throwing knives are very fast to prime and throw, deal solid damage to unarmoured enemies, and don’t cost many build points. You may not want to make a soldier around this weapon, but it compliments a lot of playing styles. 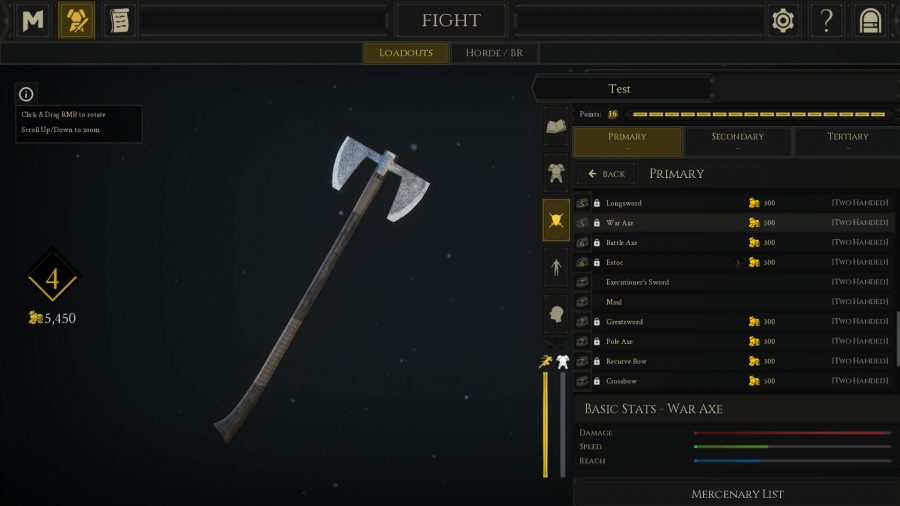 Maul
Very short reach and poor poking damage, but otherwise an excellent skullcrusher. If you practice your drags then this is a very unpredictable weapon to come up against.

War axe
Similar shortcomings to the maul, but slightly faster.

Battle axe
The battle axe has longer range than the war axe and a higher turn-cap, but it’s not quite as lethal.

Spear
As you’d expect, the reach on this is superb. However, it’s only really effective as a poker, making it very easy to predict and counter.

Messer
Another member of the greatsword family, the Messer will, er, mess your enemies up effectively, especially if you can master your drags. However, it takes an awful long time to swing and its low stab damage limits your versatility.

Pole axe
Quick pokes with a long reach are a match made in heaven, but the damage is mediocre when compared to the greatsword. 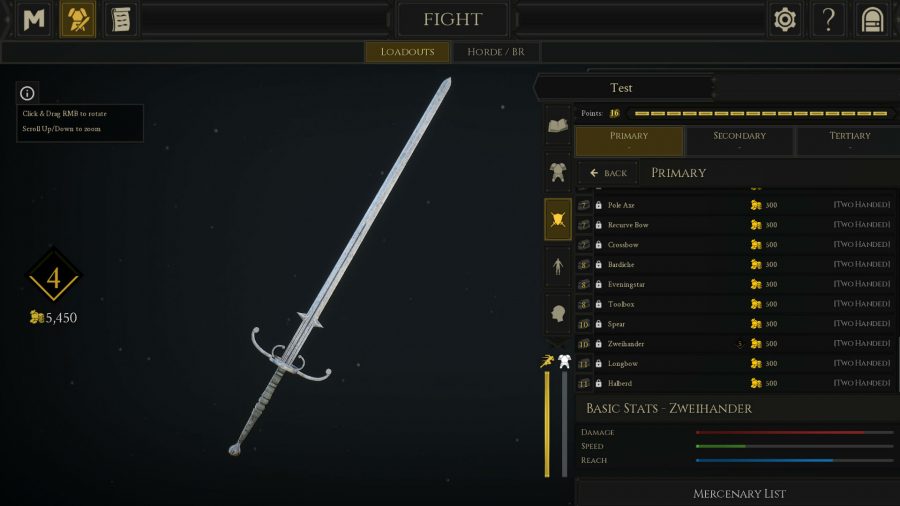 Rapier
The quick pokes make this a popular Mordhau weapon among new players, but the lack of versatility will hold you back when you come up against experienced fighters.

Falchion
Very fast attacks for a sword with medium reach and damage, allowing you to bully less experienced players with ease.

Executioner’s Sword
Poor stabbing damage holds this sword back, but if you can land your sweeps then the high damage will down enemies pretty quickly.

Dagger
Fast attacks and a low cost let you bully new players or defend yourself in a pinch.

Cleaver
Not much different to the dagger except you’ll find you’re better off swiping than stabbing.

Mace
You’ll never need more than three solid hits to kill an enemy with the mace, but with mediocre attack speed and poor reach that won’t always be easy.

Billhook
The billhook boasts some unique traits if you use its alt mode, which will pull enemies to you if you land a stab and push them away if you land a sweep. That can be tricky to counter if your build relies on distance and footwork, however, the low damage of this Mordhau weapon makes it tough to truly capitalise on its utility. 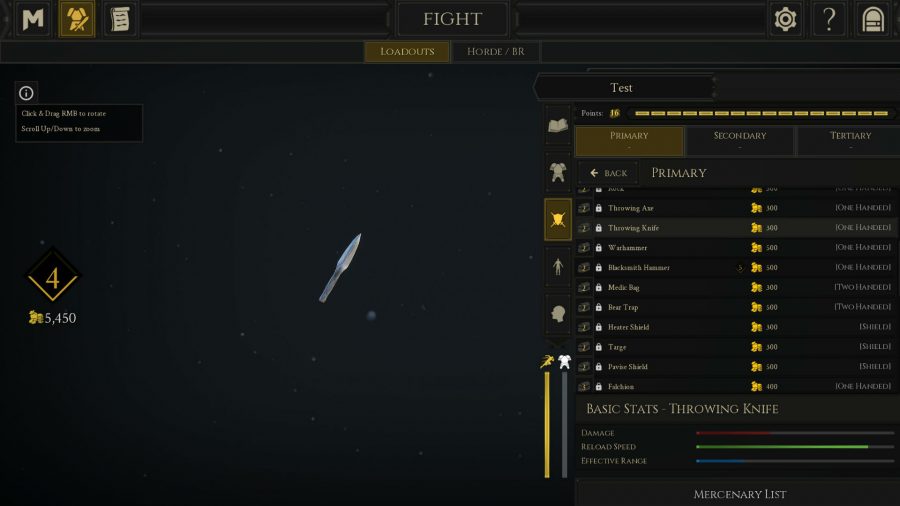 Throwing Axes
These deal decent damage against armoured enemies, but they take too long to prime and throw, which makes them very predictable.

Short spear
This is a fine weapon with the right Mordhau build backing it up, especially in large battles where you can easily pick off foes with stabs. However, you won’t win many duels with the short spear.

Estoc
Interestingly, you can use this while charging with a horse, which is some neat functionality. Other than that the only other key strength of the estoc is its high poking damage.

Bardiche
Deals heap of damage per strike, but can be tricky to land against experienced foes and lacks versatility.

Axe
A decent cheap weapon to save you in a pinch, but is only really effective with sweeping attacks.

Arming sword
Considering its low cost, this is a surprisingly effective alternative to the longsword and can attack much faster. 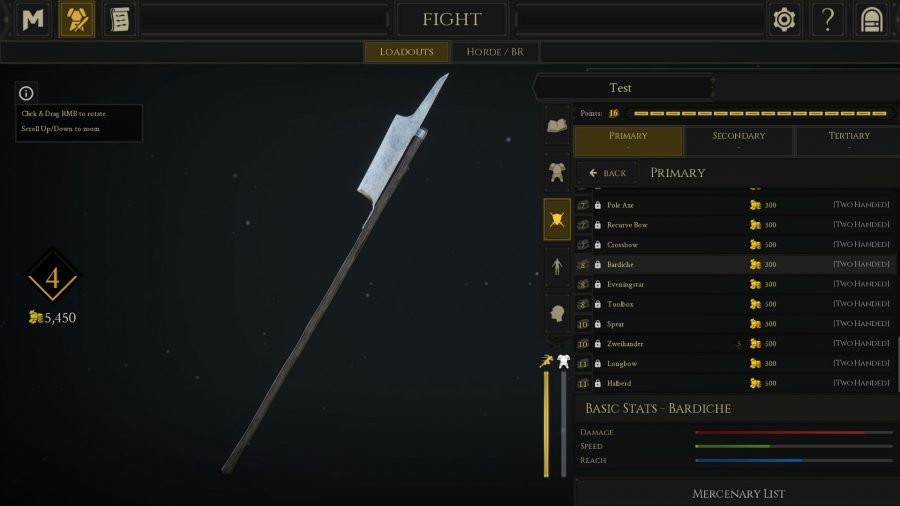 Bastard sword
Just not that strong when compared to other swords.

Warhammer
Very low stab damage limits your versatility, and you can expect middling reach, damage, and attack speed across the board. The ability to swap between a sharp and blunt side can be helpful though.

Short sword
The dagger might have less reach, but it strikes much faster, which makes it the better option.

Hopefully you’re now a little clearer on which Mordhau weapons are worth your time. When it comes to medieval combat there’s plenty more to consider than raw damage stats, it’s also all about having the versatility to throw your foes off and sneak in a killing blow. Good luck out on the battlefields.