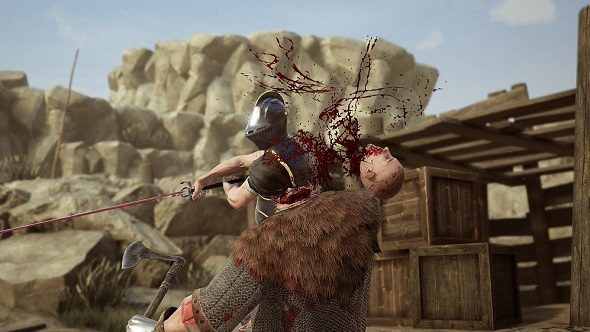 Continuing its march past its initial $80,000 funding goal, developers Triternion have released a new trailer for multiplayer medieval battle simulator Mordhau. Switching between three different maps, this video shows off one on one duels, along with multi-man melees and even some mounted combat.

Hoping to be a realistic simulator of medieval combat, Mordhau plans to remain fun while avoiding the physics defying spins and inversions of something like Chivalry. To win a duel in Mordhau, it’s more about punishing a risky move from your opponent, rather than constantly slashing at your foe like a spinning top with a sword bolted to it.

The trailer shows a multitude of weapons, ranging from your standard sword and shield to mauls, lucernes, polearms and war axes. Different weapons will require players to block and attack in different ways, so pick a weapon that’s right for you and the current situation. Something like a mace may be good in a tight space with other fighters, while a claymore is more suited to an open plain where you can swing the full length of the blade. If all else fails, you can just hurl your weapon at an enemy knight and hope it takes their head off.

Mounted combat does feature as well, with the trailer shows two knights slashing at each other on horseback. While great for hit and run attacks against large groups, charging your steed straight into a pack of angry soldiers will turn you into mulch faster than you can say ‘zweihander’. Hoping to be as gruesome as the real thing, Mordhau allows players to dismember and behead enemy soldiers with a well placed slice. As shown as the end of the trailer, you can even cut off someone’s head and use it as a football. How very chivalrous.

Three maps were shown off in this footage: a snowy mountain fort, a rocky desert camp and a castle in the middle of a farming village. You’ll have to shift tactics depending on your scenery, with the castle map leaning towards mounted combat, the desert map focusing more on single combat while the snowy map has players funnelled into a series of barricades, as one side charges up the hill to attack the enemy.

Mordhau is still in its Kickstarter phase, with it just passing the $200,000 mod tools stretch goal. The next goal is at $275,000 which adds competitive matchmaking to the game. With five days left and the Kickstarter sitting at around $222,500 at time of writing, it may not reach that goal by the end of the campaign.