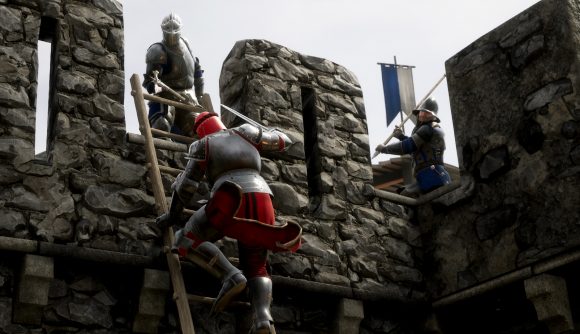 Mordhau has dipped a heavily-armored toe into the waters of ranked mode, with a new one-on-one ranked duels mode available in the latest version of the game. Developer Triternion says it plans on expanding to a ranked three-versus-three mode once the wrinkles in duels have been ironed out.

And since this is Mordhau, that means violence, and lots of it. If you’re just hearing about it for the first time, Mordhau is about medieval people hitting each other with various sharp and pointy objects, while some weirdo plays Despacito on the lute nearby.

The new patch adds a Ranked tab to the matchmaking screen, and at present, your only option is the one-on-one duel. In a blog post about the patch, Triternion says it’s serving as a test run for eventual plans to add in the team-based 3v3 mode to ranked.

“Once we’re satisfied with the state of duels, we’ll be expanding this mode to include ranked 3v3s as well,” the developers write. “It’s important that we ensure duels play well first, and make sure that the gameplay and ‘meta’ is in a good state before opening up the team variant.”

What’s in store for Mordhau?

Beyond ranked, Triternion has plenty in store for Mordhau. The studio says it plans on releasing smaller updates more frequently, and the blog on Build #9 discusses some of the features in the pipeline.

Two new maps are on the way, called Feitoria and Castello. Feitoria will be arriving first, and most likely will be included alongside another update in the near future. Invasion, the new attack/defend game mode, and that will be coming out in the next couple weeks. You’ll be able to play that on any existing map that supports the Frontline game mode.

Triternion also says it’s working on a software development kit to help make modders‘ lives easier, which is nice. However, that may be a ways off, since the studio says the process is fairly resource-intensive. In the meantime, though, server owners can now enable auto-downloads for mods they want to run. With that option selected, players who join the server will automatically start downloading the necessary mods, which will save lots of time and effort – which you can then use to practice lopping off limbs and heads. It’s a classic case of win-win.