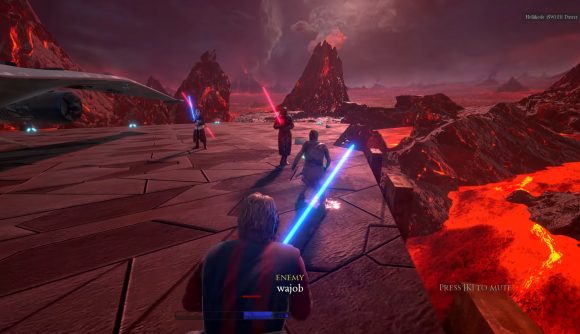 It turns out that Mordhau, the extremely violent game about medieval combat, is hysterically funny. That hasn’t changed a bit with a total conversion mod that gives the game a complete Star Wars makeover. Footage of the Star Wars mod is hilarious – it’s a surrealist, absurdist mixture of silly voices and familiar characters from pop culture murdering each other in extremely silly ways.

The first thing that really pops out is the incongruity of the Mordhau voice lines in the Star Wars setting. You may just have to watch the video below to see what I mean. Star Wars sounds a certain way, and this is something very different from that.

Then there are the distinctive Mordhau physics. Lightsabers, which there are a lot of in this mod, seem much heavier than they appear in official Star Wars media. They’re also capable of sending people flying into walls, ragdoll-falling over cliffs, and – very occasionally – deflecting blaster bolts. It’s all very home-made looking, and the weird crudity of it all is oddly charming.

The Mordhau Star Wars mod is currently in Alpha, and it’s compatible with a single map called Mustafar. To play it, you’ll need to either join or start a server running both the mod and the Mustafar map, which you can find over at the Mod.io page for Mordhau.

There’s plenty of other silly stuff to do in Mordhau – players have practiced PPE and quarantine procedures, annoyed each other by playing Despacito, and perfected the art of yeeting an arming sword into an enemy archer’s face.

If you actually want to play the game though, have a look at our Mordhau hints and tricks, and our guide to the best weapons in Mordhau.