Mordhau is an exercise in organised carnage. You can march onto the viscera-soaked battlefield armed with all the Mordhau tips in the world, but this is a Chivalry-inspired multiplayer game that captures the overwhelming chaos of a medieval melee. That said, we still endeavour to introduce you to the finer points of swordplay, pugilism, and engineering to turn you from a trembling craven into an expert knight that cleaves legions of men in twain with this Mordhau beginner’s guide.

Speaking of Twain, it was Mark that said – and we’re paraphrasing here – the best swordsman is not most fearful of the second best, but the stupidest. This is not only why we’re so successful at Mordhau, but it goes some way to explaining quite how deep the game’s bloody mire of a melee combat system is. The endless number of moves and disciplines that can be mastered means no one-on-one fight to the death plays out in the same way, and you can always surprise even the most accomplished fighters.

This means that, without a decent set of Mordhau tips to get you started, it’s easy to find yourself eternally lost amid the slurry of dirt and body bits. So here we’ll be taking you through the basics of combat, introduce you to the game’s various classes, and show you the best means of remaining in one piece. So, now the trumpets are blaring and drums banging, here’s our Mordhau beginner’s guide.

Master the basics first, and be patient

As ever, the best way to start your military training is with the tutorial. This essential combat prep takes you through the basics of attacking and parrying, but you’re really only scratching the surface at this point. The most important of Mordhau tips to grasp early on is that it’s not a mindless hack and slash game. You could play it that way, but it’ll inevitably end up being you that gets hacked and slashed.

In this sense, Mordhau is not entirely unlike Sekiro: Shadows Die Twice. Combat is all about timing, and you need to think methodically about every swipe, stab, and block. That means you must always be devoting your undivided attention to the behaviour and weaponry of your opponent. If they’re wielding a cumbersome zweihander, note that it will take longer to swing, so don’t parry too early or too late, and without simply holding down the right mouse button.

Parrying is the key mechanic to practice at the beginning. Unlike the three block and attack directions you’ll find in For Honor, in Mordhau you point the camera roughly where the tip of the enemy’s weapon is. Then while they’re winding up a thrust, hit right click to block. Parrying at just the right time will allow for a follow up riposte attack, which is both satisfying to pull off, and effective. You’ll know your parry is successful as your crosshairs become hollow. If you’re struggling to deal damage, stabbing is a simple means of doing so despite being relatively weak, but it also reduces the chance of you doing friendly damage if you’re in the middle of a massive fight.

Focus on feinting once you’ve learned the ropes

Once you’re not as summer green as you were at the beginning, with a few skirmishes under your belt it’s time to take combat to the next level: now try feinting. This might not be a Mordhau tip for beginners, but the quicker you can get your helmeted head around this technique, enemy bonces will cascade around your feet before you know it.

When you’re getting in the groove with simple combat flourishes, you’ll notice that beginner vs beginner battles will take on a predictable pattern: block, attack, block again, attack again, and so on. Feinting throws an axe in the works of this repetitive rhythm. If you attack and then use a feint move, you can quickly get in another slash just before your foe starts their next slash. In other words, the rhythm is disrupted, which sows the seeds of doubt in your opponent. Then all that’s left is for you to force them to the floor in a state of permanent faint. 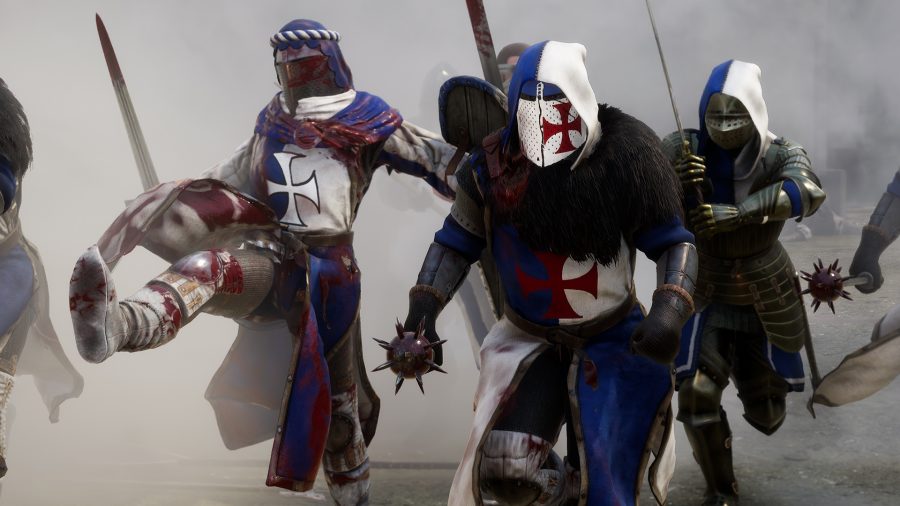 You might not have spotted this right away, but you gain health on each kill in Mordhau, so it pays to bow to the game’s pro-aggression meta. And, needless to say, soldiers you come across are most likely injured, whether they’re on death’s door or carrying but a scratch. Either way, these are the ones to target.

Going ballistic: These are the best building games on PC

Provided you’ve successfully dispatched your enemy, you can enjoy a little health boost to keep you in the fight. Remember, however, to think carefully before you unleash your first attack: it’s hard to have a perfect sense of what’s going on in the deadly disarray of medieval warfare, but a blood-smothered target could be a friendly, so take a moment to check before harming a team member. 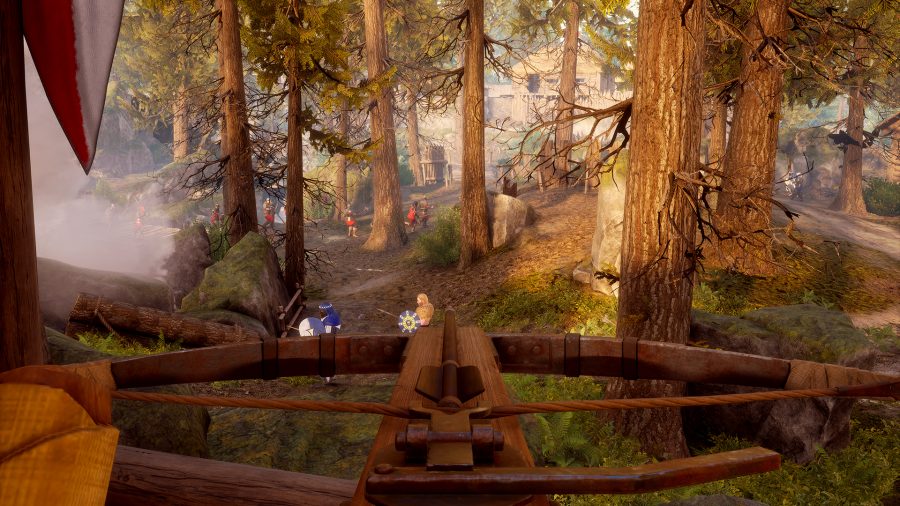 If you want to get into the fight straight away, there are a number of preset soldier types, or Mercenaries, from which to choose, and not all of them require you to actually fight. As well as the Scoundrel class that lays traps for unsuspecting and soon-to-be-massacred soldiers, the Engineer preset character is a great way to have an impact on the war outside of conventional combat.

An indefatigable Engineer is a boon to any army thanks to their ability to create handy defensive structures and siege weaponry. As this useful crafter you can build cover for archers and wooden spikes that make it harder for cavalry to charge at your forces without being skewered. You can also construct Ballistas by finding an ammo resupply box to boost your starting stocks. You don’t necessarily need to be an Engineer to do all this, either: equally you can make a custom character and equip them with the Toolbox from the Two Handed section. And, speaking of custom characters… 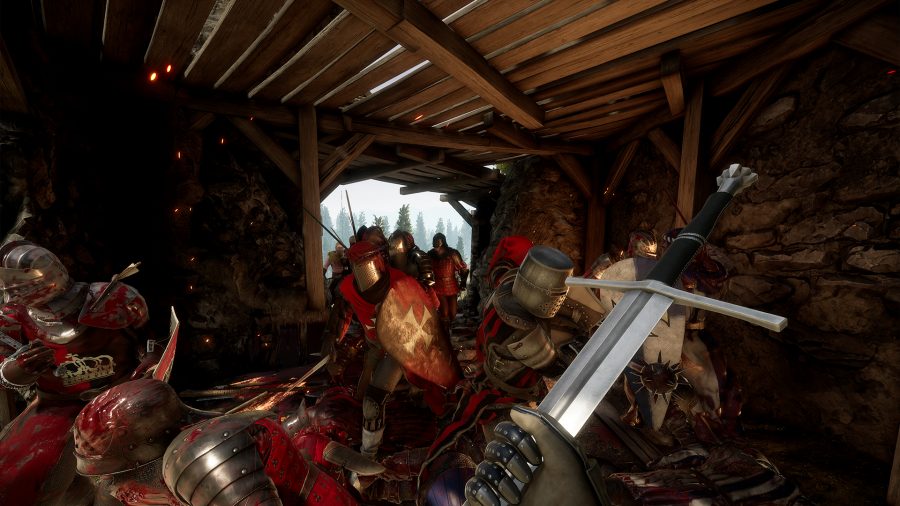 Take advantage of your alternative grips

Just in case you hadn’t gleaned it already from this Mordhau beginner’s guide, but this is a pretty deep game. You already have an awful lot of options to wage war no matter what build or Mercenary you choose, but make sure you don’t neglect the chance to use alternative grips.

Using ‘R’ you can beat foes to a bloody pulp in a different way with the same weapon, and it can come in handy against experienced foes. For instance, with a sword, you can flip the weapon over and hold it by its blade. That frees up the hilt with which you can deal blunt damage which is more effective against heavily-armoured enemies. But, if your weapon doesn’t have an alternative grip, chances are you can throw it to catch an enemy off guard and allow you to flee to safety.

War, how? Now try to survive in these other war games

And there you are, you might be battered and bruised, but at least you’re alive in no small part thanks to our handy Mordhau tips guide. If you’ve got the taste for violence up close, check out our list of the best fighting games on PC. Equally, though, if you’ve developed a taste for all things medieval, here’s our Kingdom Come: Deliverance combat guide. It might not be a multiplayer title, but nothing beats the brutal crunch of old timey scraps. Whatever you go for, we’re pleased to see that you now have a strong head on your shoulders. Or just a head at all, at least.