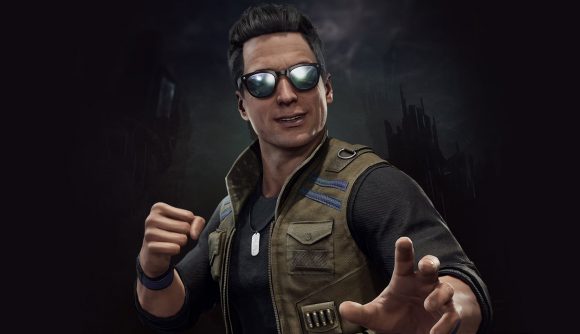 Mortal Kombat 11 is only out in April and it’s still got most of its fighting roster to reveal, however there are a number of regular fighters who fans just expect to see, such as Sub-Zero or Scorpion. Superstar Johnny Cage is one of those fighters, as he’s been in pretty much every game in the Mortal Kombat series since the first one – and he’s finally been revealed for MK11 with a suitably ridiculous trailer.

If you don’t know the Mortal Kombat series, Johnny Cage is a martial artist and action movie star, and was originally loosely based on Jean-Claude Van Damme – who, ironically enough, would play the lead role in the movie based on rival fighting series Street Fighter.

In the new trailer, Cage unleashes the full power of his acting talent, with various movie-themed moves. These include shielding himself by miming himself in a box, having a crowd cheer him on for extra hitting power, and bringing on a stunt double to hold his opponent in place as he punches them in the groin.

The most significant moves, however, are left to Johnny’s ultimate move and Fatality. His ultimate move basically involves beating his opponent into submission with his ‘Best Actor’ Oscar. His Fatality, on the other hand, is probably the funniest in the game. He tries to punch his opponent’s head off, just like he did in the first game, but messes it up – and gets several “takes”, complete with director and movie clapperboard, to try again. You can check out his full reveal in the trailer below.

The full roster for Mortal Kombat 11 continues to grow ahead of its April 24 release date, although there are still plenty of fighters from the original games we don’t know if they’ll be playable or not, such as Liu Kang, Kano or Shang Tsung.

Fatality: check out the best fighting games on PC

Hideki Kamiya suggested bringing Bayonetta to Mortal Kombat 11, which is something we wholeheartedly agree with, and not outside the (nether)realms of possibility. One person who definitely won’t be a fighter, however, is Shaggy from Scooby-Doo, and that’s probably the biggest disappointment of the lot.