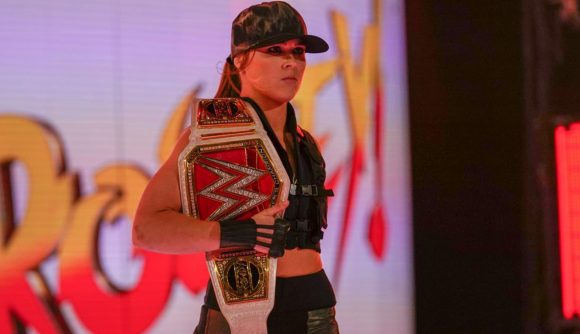 Ronda Rousey brought the spirit of Mortal Kombat to WWE’s Elimination Chamber last night, and not just because she finished her opponent in less than two minutes. Rousey entered the ring in full Sonya Blade gear, complete with military-style padding and dog tags – most similar to the character’s appearance in MKX – a big step away from her usual look.

Rousey will officially join the Mortal Kombat 11 roster in April as the voice of Sonya, so this is likely a well-timed bit of cross-promotion – WWE fans know the company will never shy away from a chance at co-marketing synergy. The commentary noted the Sonya costume, and hyped up Ronda’s appearance in the game as well.

Rousey made an on-stage appearance at the initial MK11 reveal, though at the time she was the only WWE star there who didn’t show up in costume – fellow wrestlers Xavier Woods, Kofi Kingston, and Zelina Vega showed up as Shao Khan, Shang Tsung, and Jade. Vega took the fighting game spirit to the ring earlier this year, when she entered the Royal Rumble wearing the mask of Street Fighter’s Vega. (No apparent marketing deals on that one.)

What I’m saying is that wrestlers are all nerds now. Did you miss that WWE League of Legends stream?

In addition to the quick clip of the match above – hey, WWE still wants you to pay for that pay-per-view – Rousey put up some more photos on her Instagram.

Sonya – but definitely not Shaggy – will be there when we get hold of Mortal Kombat 11 on April 23. I look forward to the inevitable Wrestlemania spot where Ronda – uncertain of her chances against Becky Lynch and/or Charlotte – challenges everyone to an MK11 tournament.