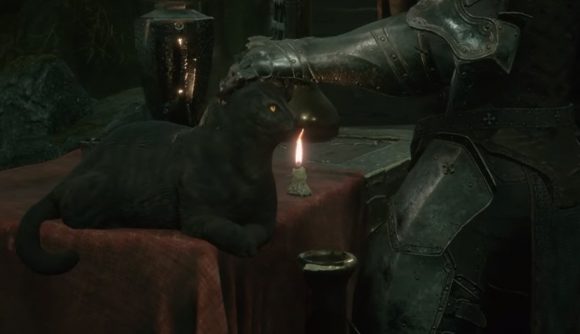 The good news: the Mortal Shell beta was a roaring success, bringing in hundreds of thousands of players. The bad news: less than half of them stopped to pet the cat, the heathens.

Mortal Shell is an upcoming Souls-like game whose recent closed beta was so in-demand, developer Cold Symmetry had to make it open. Now that the demo’s been finished, some stats have been released in celebration. The demand was no joke, as over 350,000 players gave the RPG game a go, and between Twitch and YouTube, an eye-watering five million hours of content were generated.

But the most important stat is the third, quantifying how many players stopped to pet the sweet cat that appears. Seemingly, 150,000 or so, or less than half, saw it appropriate to stroke one of the beloved kitties. Perhaps they didn’t think a ‘pet’ option would appear, or they didn’t notice the feline companion – even though it’s right beside the first NPC – or Mortal Shell is attracting a disproportionate amount of dog people. What matters is the numbers, and they tell a harrowing story.

Our Ian Boudreau was impressed in his preview, writing “Mortal Shell is uncompromising but not unfair, and while its combat demands your full attention, it isn’t pointlessly difficult.” He has since confirmed that he, too, pet the cat.

We have been overwhelmed by the response to our beta. Thank you to everyone who jumped in and gave feedback and reports on the game.

We can’t wait for everyone to get their hands on Mortal Shell later this year! 💀🐚 pic.twitter.com/bXWBx4Tutd

Mortal Shell is due to launch on the Epic Games Store sometime later this year.