It’s easy to assume that an annualised series like MotoGP deals only in incremental improvements – that while its bikes scream around their tracks at 200 kmph, the games must only inch forward year by year.

That’s not the case for MotoGP 18. This is the first time the series has appeared on Unreal Engine 4, a leap that has brought about enhancements in fidelity, lighting, and physics. And this year finds developer Milestone committing to esports like never before, with a championship that will build from semi-finals on-site at the Misano World Circuit to a grand final hosted in Valencia. A BMW M240i Coupé is promised for the winner.

While you wait for MotoGP 18, here are what we think are the best racing games on PC.

To put it another way, Milestone has made it crucial that it gets every aspect of online play absolutely perfect – a goal that involves mastering some tricky technical corners along the track to release.

Getting collision right is crucial in MotoGP, even more so than in Milestone’s sister motocross series, MXGP.

“When you collide at 200 kmph, the forces, impulses, and inertia are very different,” R&D programmer Michele Caletti tells us. “What’s robust at 50 is maybe not at 200, so we are trying to be very robust at 300.” 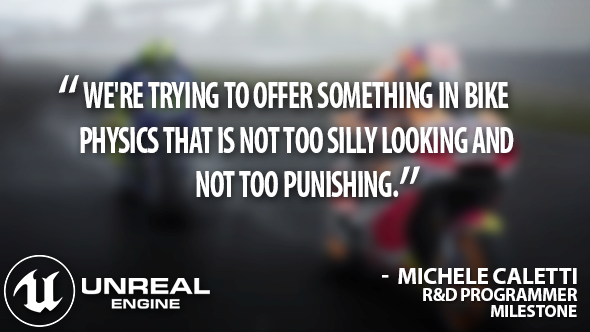 “The key point is to achieve good performance, because collisions can be quite heavy in terms of computation,” Caletti says. “We’re trying to offer something that is not too silly looking and not too punishing. You have to blend in between, in a sweet spot.”

Online, it’s not just the look or recovery time of a crash that Milestone has to worry about. The studio is also concerned with fairness. As anybody who’s joined an FPS server on a dodgy connection can tell you, precision can’t be taken for granted. Lag can make determining the exact position of each player a real difficulty, and that comes to a head in a crash.

“There are many little tweaks you can do to favour the experience of the player in their context,” Caletti says. “We try to rebalance, adapt to the lag, the bandwidth, and if you are close or far on the track. Then we try to understand who’s authoritative in terms of deciding what happened, and to be fair in forecasting the results of a collision.”

Milestone has made huge progress with this process in the last couple of months leading up to launch.

“It’s something that moved from heavily in development, to ok, and now it’s going to be great,” Caletti says. “It’s one of the key elements, to offer a very good online experience.” 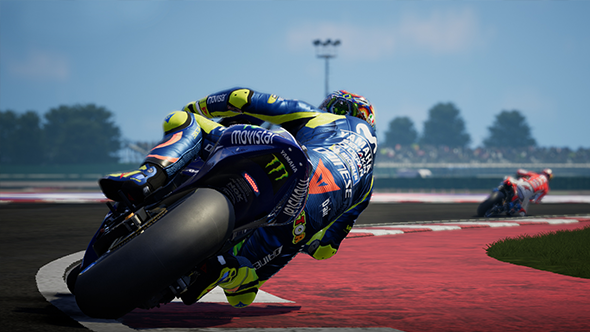 In early versions of MotoGP, Milestone relied on track data provided by third-parties, which resulted in some dated 3D maps. These days, it flies drones over the tracks to capture all the correct elevation, detail, and texture.

“You can’t use it straightforwardly in the game,” Caletti says. “It’s a blueprint you have to follow to create the track, for several reasons. The topology of the points cloud is not usable, and the textures are good for reference, but not as a quality level for the game. Many reasons. But it’s better.”

Previously, Milestone relied on vans which carried scanning platforms on their roofs. While the data produced by ground scanning was more precise, it had its downsides.

“You don’t know what’s behind a tree,” Caletti points out. “With drone scanning, you can capture everything, and you have means of eliminating the vegetation. It’s very good for wide environments, and captures more broadly. It’s a good trade-off between precision and the completeness of the track you capture.”

The studio has found that what really matters in racing is capturing the banking and elevation in a track, and drones allow them to that with greater ease.

The difference between near and exact replication of a track might seem negligible, but for Milestone it’s one of the most important factors in delivering the game Moto-heads want to see. 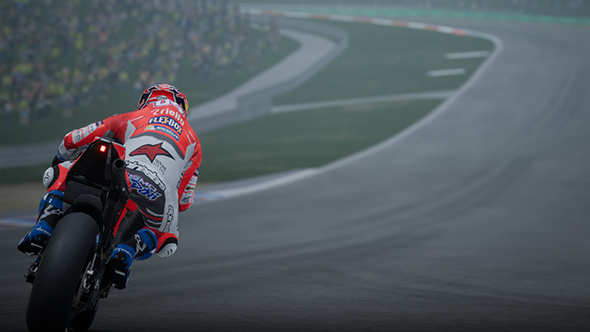 “It’s one of the steps that passionate riders can appreciate,” Caletti says. “These people are the ambassadors of the game, because if they talk very well about the game, they can transmit to other players the commitment and the sense of fidelity. Having someone on Facebook who says, ‘I’ve been on that track with my bike and it’s accurate,’ it has value. That’s something that when we achieve it, we’re very happy of.

MotoGP 18 is in development for the PC. Unreal Engine 4 is now free.