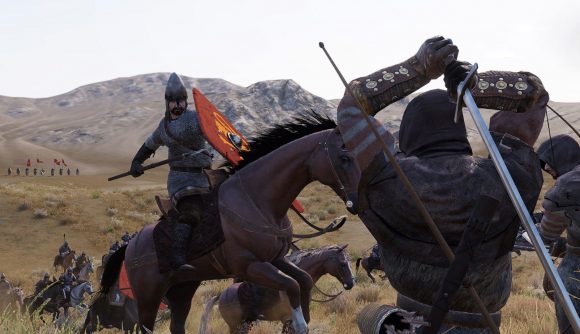 After its monstrously big debut in Steam Early Access this week, Mount & Blade II: Bannerlord‘s first major patch has landed. There’s no new content here, but you’ll likely be happy to learn that a host of major crashes have been fixed, though it seems that some of the game’s most ridiculous, er, ‘features’ have also been removed.

The patch fixes crashes when you open the multiplayer team selection screen, when talking to village notables, when succeeding or failing bounty hunter quests, during the Army of Poachers quest, when helping allies that are besieging settlements, when running out of charcoal while crafting, and plenty more – you can get the full details on the official site.

One thing the patch notes don’t mention is that you can no longer play Bannerlord as a baby. Players started to note that you could no longer simply tap a key in character creation to play as a precocious would-be lord, and we’ve sadly confirmed that for ourselves. It’s not clear if playable babies were a bug or a feature, but we have to say goodbye for now.

Workshops have also gotten a harsh daily income cap of 200. The game’s economy has allowed players to pull in daily income in the tens of thousands, and this might just be a stopgap solution until a more thorough economic rebalance goes out.

We’ve got a Bannerlord money guide to help you make up for the lost income. Bannerlord’s been a long time coming, and it’s likely to continue getting the Early Access treatment for some time to come – the devs expect it to hit 1.0 in about a year.