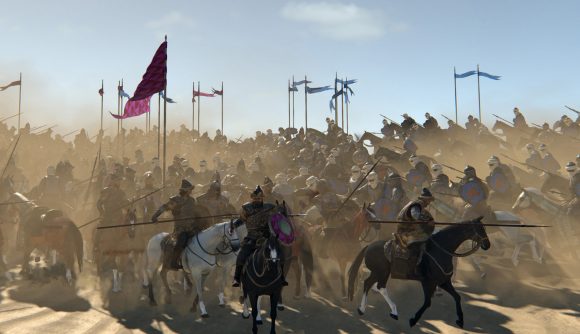 Mount and Blade 2: Bannerlord isn’t necessarily known for its fancy tech options, but it will soon be able to take advantage of some of Nvidia’s hottest next-gen tech. RTX owners will be able take advantage of DLSS starting in November – though, sadly, the game’s not in line for ray tracing. (Not yet, anyway.)

DLSS is an AI upscaling technology that makes your game appear as if it’s running at a higher native resolution than it actually is. So you could upscale, say, a native 1440p image to a full 4K through the power of AI, with vastly superior frame rate compared with a native 4K resolution, and it’ll actually appear more detailed than the 1440p original.

We’ve already seen DLSS have a massive effect in games like Death Stranding, so it’ll be good to see what sort of effect it has in a title like Mount and Blade 2, still in Early Access. Nvidia’s announcement also highlights a few new and upcoming games getting DLSS, including RPG Edge of Eternity, which is getting support later in the year.

DLSS and ray tracing support are also coming to a big variety of other games in the remaining months of 2020, including Cyberpunk 2077, Call of Duty: Black Ops – Cold War, Watch Dogs Legion, Mortal Shell, World of Warcraft: Shadowlands, Xuan-Yuan Sword VII, Ghostrunner, Ready or Not, Enlisted, and Pumpkin Jack.

Check out some Mount and Blade 2: Bannerlord mods if you’re looking for more out of the game right now – there’s one out there that’ll turn the whole thing into Lord of the Rings, if that’s what you’re into.