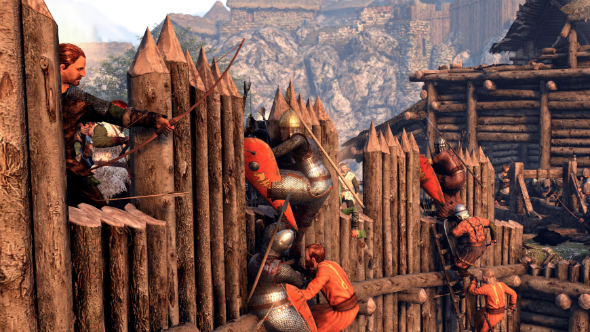 Murder holes sound fun, don’t they? Not for an attacking army obviously, but from the defender’s perspective throwing rocks down at some angry, beardy men who are trying to take your property looks like a right laugh. At least that’s what we gleaned from the siege defence gameplay posted by TaleWorlds Entertainment.

Love immersing yourself in a world? Check out the best PC RPGs.

The footage covers a complete siege instance from the defender’s perspective, showing what tools and tactics enemies will use to attack you and what you can do to fend them off. The siege appears to occur in three stages, with attackers first attempting to scale the player’s fort with siege ladders, then wheeling in a battering ram to attack the fort’s gates, and finally trying to break through the player’s last line of soldiers.

For the most part the player just chips away at the invading army with a bow, causing them tumble from their ladders or crumple over awkwardly if caught mid-animation. When the walls start getting overwhelmed we see the axe in action, chopping away mercilessly at every poor sod who makes it to the top. The highlight of course is the murder hole, which offers an optimal vantage point for throwing boulders down at the attackers below. Lovely.

Alongside the new gameplay, TaleWorlds Entertainment have also announced that Mount & Blade II: Bannerlord will have an improved diplomacy features that will allow you offer up land in exchange for ending a war. The aim is to let players spend their time brokering deals instead of waging war.