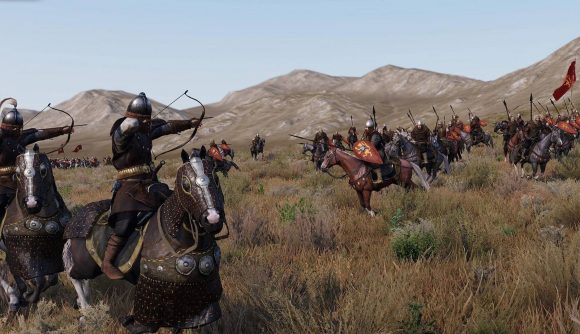 One very creative Mount & Blade 2: Bannerlord fan has posted an inspired tribute to the one and only Arnold Schwarzenegger – in the form of a spoof movie trailer reimagining several of Arnie’s iconic roles as played by a humble, pitchfork-wielding farmer.

Creator of this hilarious cinematic treat is user SofaBeard, who has titled the spoof trailer ‘Clear and Peasant Danger’. Nice. The clip introduces our hero, “a humble farmer”, who is just going about his business shovelling hay. “I’m just a farmer. I love farming,” he says, helpfully illustrating this, in an excellent mock-Arnie voice. The setting (in a trailer narrator VO that’s on point): “In a world ruled by power, it was a kingdom of peace”.

But then trouble strikes – “when they invade,” the narrator ominously, er, narrates as enemy ships arrive and explosions go off. Farmer-Arnie knows he has to get out of there, “and now, he’s going to fight back the only way he knows how”. Are they just going to “pitch rocks at them?” an ally asks. “No,” says farmer-Arnie. “We are going to pitchforks!”

We’re treated to some twists on famous quotes from the actor’s flicks as the farmer takes on the invading enemies. “Get down!” he shouts (Terminator 2: Judgement Day). “Why don’t you go fork yourself?” he hollers (The 6th Day. Sort of.), along with some very good Arnie-farmer combat noise impressions.

Coming Soon To A Village Near You… (Sound On!) from mountandblade

The whole thing ends with a bang, as the title appears onscreen. Whew. Get a look for yourself above.

It looks like the trailer’s a bit of a hit in the action-RPG game’s Reddit community, with just under 9,000 upvotes as of this story and a load of comments thanking Sofabeard for their work. Some fans have even suggested alternative titles for the spoof movie, such as ‘Conan the Agrarian’ and ‘Farmageddon’. Here’s hoping there’s a ‘sequel’ so those can be put to good use.

If you’re a fan of the game, be sure to take a look at our Bannerlord companions and Bannerlord money guides to hep you get the most out of your next in-game adventure. In the meantime, scroll up and give that trailer another watch. You know you want to.